How Vietnam went from pandemic hero to COVID shambles Few economies have pivoted from an inspiring success story to a cautionary tale faster than Vietnam.

Just a few months ago, the globe marveled at Hanoi's incredibly low COVID-19 infection numbers and negligible death rate. This outlier status was a big feather in the government's hat. Perhaps the biggest winner from the U.S.-China trade war, Vietnam was already scoring a disproportionate number of manufacturing jobs fleeing China. Then, a COVID exemplar to boot.

Now Vietnam embodies how the broader Southeast Asian region grew complacent. Just as in Thailand, Indonesia and elsewhere, its leaders believed their own press. They assumed that early mitigation successes could be replicated if needed and that large-scale vaccination programs could wait.

Pathogens do not make political considerations, and the delta variant is rapidly exposing holes in Southeast Asia's pandemic armor. The mutation -- and others that might be on the way -- is generating a particularly rapid reassessment of Vietnam's economic health.

If newish Prime Minister Pham Minh Chinh hoped for any kind of honeymoon, political reality quickly set him straight. In April, he grabbed the reins from Nguyen Xuan Phuc, who had accelerated reform and modernization efforts in his five years in power.

Just not enough, as Vietnam's 98 million people are suddenly being reminded. 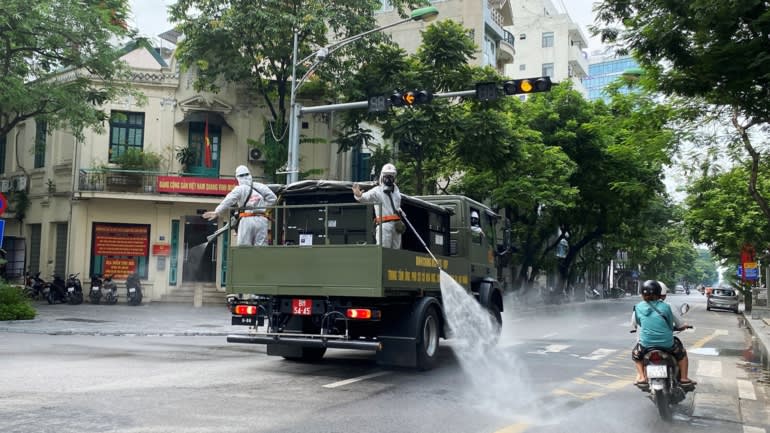 Military personnel spray disinfectant on the streets in Hanoi on July 26: the mutation is generating a particularly rapid reassessment of Vietnam's economic health.   © Reuters

The good news is that Chinh's administration is raising Hanoi's vaccination ambitions. In June, it launched a $1.1 billion vaccine fund. And while just 1.4% of the population was fully vaccinated as of Aug. 18, Hanoi aims to get that figure to 75% by early 2021. This may be too little, too late, though.

Japan, for example, is currently obsessing over the lambda coronavirus variant, one that epidemiologists worry could make us nostalgic for delta. The U.S. is already rolling out a third-dose drive for its two best COVID vaccines, produced by Pfizer and Moderna.

This will require a level of logistical genius and aggressive procurement efforts for which Vietnam has rarely shown a great aptitude. Vietnam squandered considerable time in 2020 trying to perfect a homegrown vaccine. This next phase of the pandemic will be more about working the phones to import remedies.

It is certainly possible Vietnam will surprise us, as it did in 2020. And surely, some of the nation's biggest stock investors retain a half-glass-full view.

Perhaps. But the sense of economic deja vu is hard to shake. Few important economies experience bigger perceptional extremes than Vietnam. Since the late 1990s, the place has been locked in a boom-bust cycle, whereby every few years or so the latest asset bubble bursts and sends capital fleeing.

Beginning in 2016, Phuc's administration worked to reduce the amplitude of the swings from irrational exuberance to near-panic. Hanoi raised its ease-of-doing-business score, improved infrastructure and increased transparency -- at least as much as a China-like political system is willing to go.

The payoff: a parade of globalization's biggest names employing a fast-growing number of Vietnamese. Former U.S. President Donald Trump slapping tariffs on Chinese goods was an excuse for Adidas, Apple, LG, Nike, Panasonic, Samsung and myriad others to increase their bets on Vietnam.

The optimistic view is that as new COVID variants hit China, India, Indonesia, Malaysia, the Philippines and elsewhere, Vietnam might still look good in comparison. The catch, of course, is that Chinh's government must multitask in ways that make it an outlier again in Southeast Asia.

Last month, Chinh's administration did just that when it struck a currency deal with President Joe Biden's U.S. Treasury Department. On his way out the door in late 2020, Trump put Vietnam on the dreaded "manipulator" list. It was a perplexing move. Trump gave China, with $16 trillion of gross domestic product, a pass, while targeting Vietnam's $354 billion economy. That is what Hanoi gets for winning Trump's trade war.

All is now forgotten. The State Bank of Vietnam and Biden's Treasury chief Janet Yellen agreed to lower the temperature and increase cooperation on trade and exchange rates. This frees Chinh's team to worry less about global headlines than the health of his people and the domestic economy.

Case in point: a new push to jump-start one of Southeast Asia's smallest e-commerce markets. Earlier this month, Hanoi unveiled a goal for the digital economy to generate 20% of GDP by 2025, and 30% by 2030. Given the blistering speed with which apps and tech startups are disrupting economies everywhere, these goals might prove overly conservative.

Yet all this suggests Hanoi understands it needs to cultivate and tolerate the emergence of a Jack Ma of Alibaba Group fame -- or two -- without disappearing him, China-style. It suggests a renewed push to diversify growth engines away from smokestack industries, invest more in education and training and rethink Hanoi's policy of limiting media freedoms. It also suggests Chinh's team knows the boom-bust cycle must end.

All this will mean little, though, if Hanoi does not act just as aggressively and nimbly to restore Vietnam to COVID success-case status. There is every reason to think Vietnam can do just that. But the clock ticking louder and faster than ever before, leaving this new government with not a second to waste.