How will history judge Benjamin Netanyahu?

Israel's longest serving Prime Minister is a global brand unto himself Netanyahu has always been a cold-eyed realist.   © Getty Images
CopyCopied

When I first met Israeli Prime Minister Benjamin Netanyahu, or Bibi as he is universally known in Israel, in 2013, he was already at the top of his game.

A global brand unto himself, Israel had never before produced a Prime Minister of Netanyahu's international stature.

His fluent command of American English and its idiomatic expressions, as well as his gift for the sound bite, made him a natural television talent.

The close interest -- bordering on obsession -- with which the world looks at Israel and the Middle East meant that international figures were always beating a path to his office door.

Before I took any Australian representative inside the Aquarium, as the glass-paned inner sanctum of the Prime Minister's office in Jerusalem is known, I would warn them that they would have to work hard to register their points.

Left to his own devices, Netanyahu would comfortably fill the allotted time for the meeting with an invariably fascinating account of contemporary geopolitics, jaw-dropping anecdotes about his recent interactions with world leaders, a lecture on the broad sweep of history, a reference or two to the latest book he was reading, and his latest thinking on how technology and innovation would reshape the modern era.

Frequent trips to the map of the Middle East hanging prominently on his wall were obligatory. It was usually only reluctantly that he would cede the floor to his interlocutor and engage on their issues.

After a meteoric rise in his early political career, Netanyahu's first term as Prime Minister, from 1996 to 1999, was widely considered a failure.

He lost the election badly in 1999, after only one term, and was consigned to the political wilderness. No one expected a revival.

His return to the Prime Minister's office in 2009 was a testament to Netanyahu's remarkable skills of political reinvention and survival, and his ability to learn from his mistakes.

He has since become such an impregnable fixture on the Israeli political stage, becoming Israel's longest-serving Prime Minister, that people in Israel can scarcely contemplate a post-Netanyahu era.

It seems almost certain that an alternative government has been formed in Israel by a coalition between Yair Lapid and Naftali Bennett, two figures who previously served as ministers in Netanyahu's earlier governments, and one of whom, Bennett, was once Netanayu's chief-of-staff.

Though he had a reputation as a hawk on the global stage, Netanyahu was invariably a voice of caution and restraint as Prime Minister, convincing or cajoling his coalition allies against pursuits that could embroil Israel diplomatically or militarily.

The fragile status quo around Jerusalem's holy sites was preserved. Israel did not annex the West Bank or reoccupy Gaza. Israeli settlements did not expand significantly on his watch. Israel did not conduct preemptive military strikes against Iranian nuclear facilities, and it has stayed out of the Syrian civil war across its northern border.

Netanyahu was mostly the centrist Prime Minister in a center-right government. People who anticipate that a change of leader in Israel might result in a change of policy misunderstand Israel's politics. On security issues, Netanyahu has been a steadfast representative of Israel's political center.

It is under Netanyahu's leadership that Israel-Arab relations have taken their greatest leap forward in thirty years, with the Arab states of the United Arab Emirates, Bahrain, Sudan and Morocco opening diplomatic relations with Israel in the past year.

The cause of peace with the Palestinians has not advanced under Netanyahu's watch. He would claim it was for the lack of a genuine partner for peace among the Palestinian political leadership, which has some truth.

Pressured by the Obama Administration into formalizing his support for a two-state solution at a speech at Bar Ilan University in 2009, Netanyahu's enthusiasm for it remains lukewarm and full of caveats.

Netanyahu has always been clear that he would not compromise Israel's security in pursuit of a peace agreement. In this respect, Netanyahu is a cold-eyed realist. Living in a neighborhood as volatile and dangerous as the Middle East, no leader of Israel can afford to be otherwise.

Clashing openly with the Obama Administration over its pursuit of an Iranian nuclear deal was Netanyahu's most audacious diplomatic gambit. He rallied Republican opposition to the deal by addressing the U.S. Congress directly, to the quiet fury of President Obama. 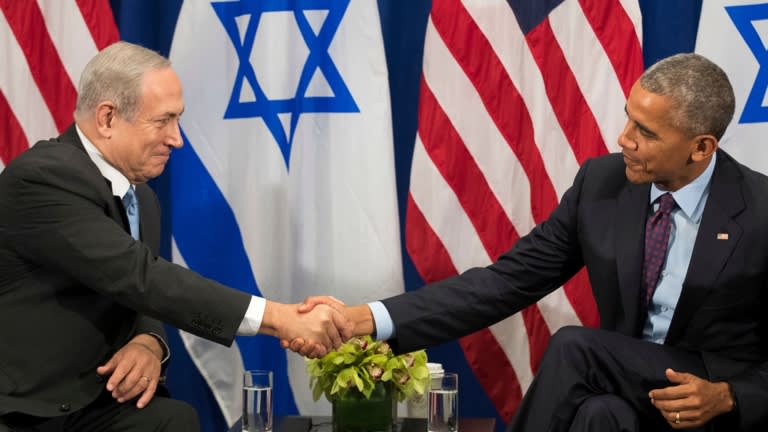 It was an unorthodox and controversial move for the leader of a close U.S. ally, and it has left its mark on what had previously been strong bipartisan support in the United States for Israel.

While he did not succeed in scuttling the deal in 2015, Netanyahu triumphed when the Trump Administration withdrew from the Joint Comprehensive Plan of Action in 2018.

With his sense of historic mission to safeguard Israel, imbued in part by his father Benzion, a prominent figure in his own right, no amount of safeguards or assurances would ever convince Netanyahu that the Islamic Republic of Iran could be trusted with an internationally blessed nuclear program. Iranian behavior since has largely vindicated this assessment.

Netanyahu's political dexterity, agile diplomacy, audacity in leadership, and unrivaled ability to mow down his political rivals frequently reminded me of another of Israel's larger-than-life leaders.

Though he tends to get an unfairly bad press from historians, Herod the Great also navigated the fate of a small state and people in an era of turmoil and among jostling rivals and neighbors.