If Donald Trump crashes the dollar, Asia will need to watch out

US President regularly complains currency is too high Trump has even broached the issue of firing Powell.   © Reuters

Among the myriad triggers of Donald Trump's ire as 2019 draws to a close is his lack of clout in currency circles.

Not one of Trump's stratagems engineered a weaker dollar -- neither bemoaning its stubborn strength nor cajoling the Federal Reserve to cut interest rates three times this year, nor even accusing China and others of exchange-rate manipulation.

In fact, the U.S. President's trade war with Beijing has stoked even more support for U.S. Treasuries, just as his tax cuts for the rich push Washington's balance sheet deeper into the red. Investor desire for safety tops Twitter rants.

Yet that may change in 2020. As the new year approaches, there are troubling signs the months ahead will bring a full-court attempt to drive the dollar lower against the yuan, yen, won and every other Asian monetary unit.

There is no mystery to this. Slowing global growth, a product of Trump's China tariffs, is complicating his reelection chances. The White House is betting that stellar economic numbers will drown out support for impeachment, and a sharp fall in the dollar to boost exports is the most readily available tool.

Bickering over Trump's scandals involving Ukraine and other issues leaves little legislative space for fiscal stimulus. Trump's $1.5 trillion tax cut of 2017 already has the U.S. careening past a record $23 trillion debt load. Hardly a surprise, then, that Trump is betting more on Fed easing.

One came November 18, when Trump turned up the temperature on Fed Chair Jerome Powell. Fed leaders tend to avoid too many meetings with presidents for fear of jeopardizing the central bank's independence. If a meeting does occur, its thrust remains confidential.

Trump, instead, tweeted that he and Powell had discussed negative interest, easing and dollar strength, the trifecta of issues any mercantilist leader might raise with a monetary authority.

The second is Trump's latest pick for the Fed board, a conservative scholar who has raised doubts about the central bank's right to defy the president's wish. Judy Shelton last month told an audience of bankers: "I don't see any reference to independence in the legislation that has defined the role of the Federal Reserve for the United States."

The Fed's formal mandate from Congress says otherwise. Still, Shelton merely represents Trump's latest attempt to pack the central bank with those willing to do his bidding. He has even broached the issue of firing Powell.

All this should worry Asia. A theme in Tokyo's recent corporate earnings cycle was fear of a stronger yen. Earlier this month, Japan Inc. icons Asahi Group Holdings, Mitsubishi Motors, Nissan Motor, Shiseido and others flagged expected currency shifts as they revised down earnings guidance for the coming year.

The yen is up just 0.5% so far this year. Yet Trump's November 12 comments to a group of economists in New York validated those concerns. He took umbrage at the Fed's refusal to help his reelection prospects -- and for holding rates higher than U.S. peers. Trump does not need to wait for the Fed. He could order Treasury Secretary Steven Mnuchin to intervene directly in markets by selling dollars. While that would add a currency war to his trade brawl, who would bet against Trump doing it?

"Now, that would be a form of quantitative easing world stock markets would really love," says economist Charles Gave of Gavekal Research.

The odds of Trumpian dollar sales might increase as China rebuffs the U.S. on a comprehensive trade deal. President Xi Jinping is likely to sign on to a face-saving phase one pact that has China buying more U.S. goods. A phase two rearranging of Sino-U.S. dynamics -- including China agreeing to stop subsidizing state-owned enterprises -- is a pipe dream. 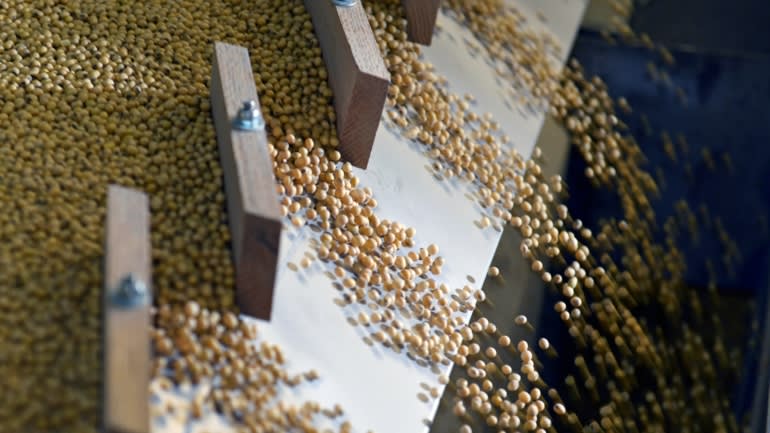 Soybeans are sorted at a facility in Fargo, North Dakota: Xi Jinping is likely to sign on to a face-saving phase one pact that has China buying more U.S. goods.   © Reuters

Disappointment will almost surely have Trump striking back. Adding more tariffs might boomerang on U.S. voters. That leaves the currency card for Trump to play, upending Asia's 2020. Governments and central banks would be wise to draw up emergency response plans to safeguard growth. They will need bold measures to cap exchange rates and protect demand.

China's exports to the U.S., for example, fell 16.2% year-on-year in October following a 21.9% drop in September. A less competitive exchange rate would make it even harder to keep growth above 6%.

Japan is flirting with recession even now. The 9.2% drop in exports in October from a year ago explains why Japan Inc. fears the worst about lost growth and profits. The @realDonaldTrump Twitter feed spits out near-daily reminders that Asian exports have not seen anything yet.