If Trump attacks China's currency, all Asia will suffer 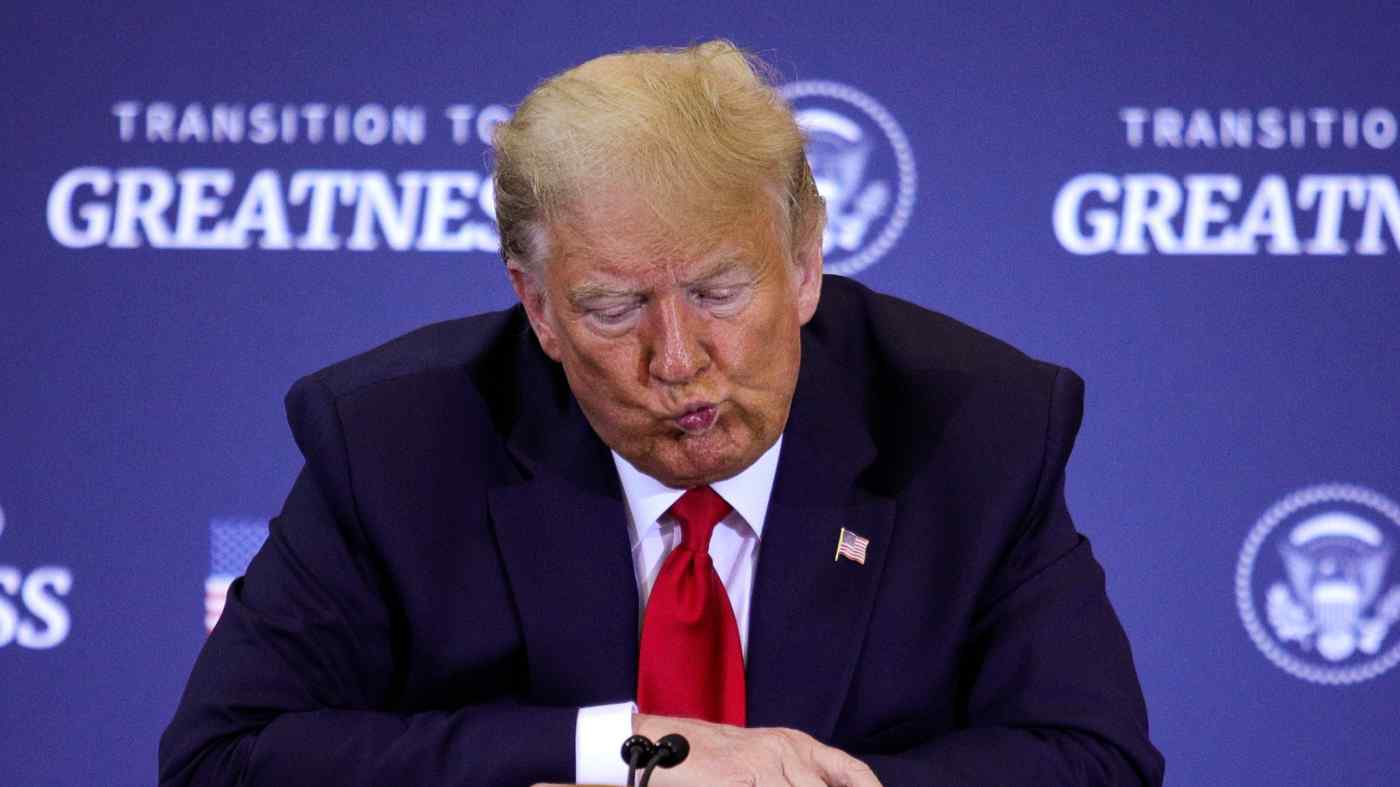 Trump might see the fallout from additional levies on Chinese goods as an acceptable price for better poll numbers at home.   © Reuters
CopyCopied

The yuan's slide against the U.S. dollar -- down roughly 3% since a mid-January high -- could not come at a better time for China. It offers a badly-needed competitive boost as COVID-19 damages Asia's biggest economy.

But is this the worst possible moment to be gaining an advantage as the Trump administration itches to intensify its trade war?

The question was put in stark relief by a trade milestone that President Xi Jinping is probably hoping the White House does not notice. In May, China recorded a head-turning $63 billion trade surplus, the biggest since at least the early 1980s.

Worse, Beijing exported nearly $28 billion more to the U.S. than it bought from it, a bigger gap than the month before. This runs directly afoul of U.S. President Donald Trump's reelection campaign in which he wants to seem strong against China, and it raises the odds of a broader trade conflict heading into November 3, when Americans vote.

Since 2018, Trump has slapped tariffs on hundreds of billions of dollars of Chinese goods. In 2019, he added a technology theater to the trade war. The odds are rising that 2020 will be the year of the Trump versus Xi currency clash investors have long feared. 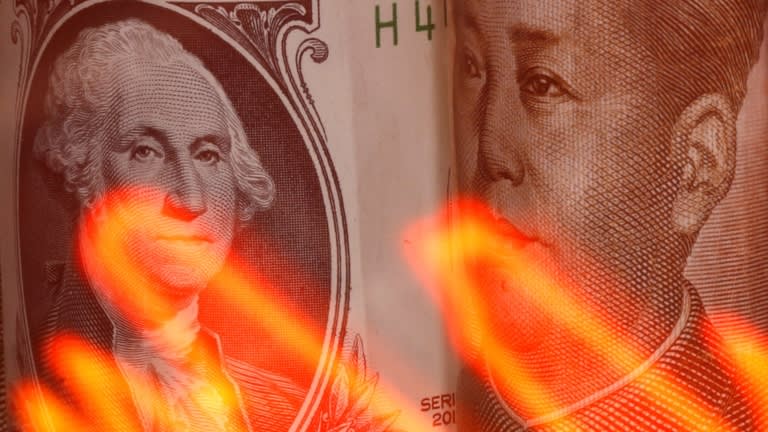 The odds are rising that 2020 will be the year of the Trump versus Xi currency clash.   © Reuters

Granted, the yuan is not in free fall. Its decline this year makes perfect sense in economic terms. You would expect any unbalanced, heavily-indebted economy growing the slowest in 30 years to suffer some currency weakness.

Yet Trump's team is not known for nuanced views. In recent weeks, rabidly anti-China Trump adviser Peter Navarro has promoted any number of conspiracy theories to dent Beijing's global image. They include his strange contention that Xi's government put hundreds of thousands of Chinese on flights to New York, Milan and elsewhere to "seed" the coronavirus.

How long before Navarro and his ilk latch on to currency moves to accuse China anew of stealing U.S. jobs?

The rhetoric coming out of Trump's White House may exacerbate the trend. Trump's plan to strip Hong Kong of its privileged trade status after China strengthened its grip on the city has increased demand for U.S. government debt, supporting the dollar in world markets.

Hints that the U.S. might walk away from its phase one trade deal with Beijing are having a similar effect. That could send the yuan to 7.3 per dollar, a level that traders have not seen since 2007, Mizuho Bank's Ken Cheung told Bloomberg News. In a June 1 note, analysts at Goldman Sachs set their sights on 7.25. 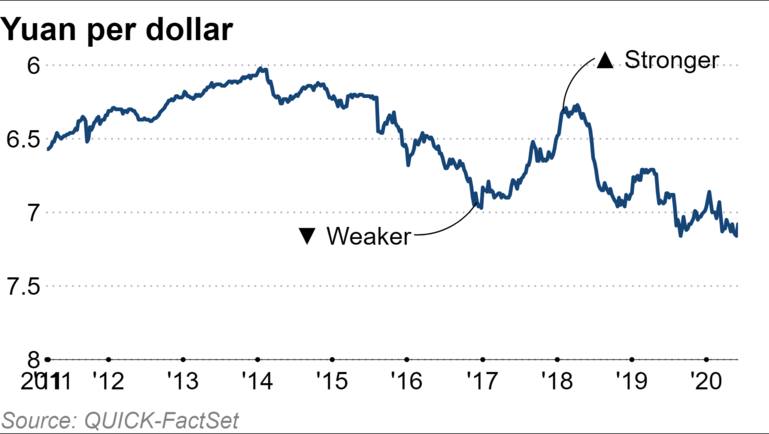 On May 8, Trump said he was "very torn" about going ahead with the trade pact. Such uncertainty comes with its own price, as May's record surplus shows. The 3.3% drop in Chinese exports year-on-year reflects weak global demand while a 16.7% tumble in imports -- accounting for the huge gap -- smacks of a lack of confidence among domestic purchasing managers.

The risk is that this trend might, inadvertently, troll Trump into broadening his trade brawl with China. The more his poll numbers deteriorate, the more Asian supply chains will be in harm's way.

At home, Trump is facing three overlapping crises: a botched COVID-19 response, a plunging economy and a swelling protest movement stemming from the May 25 death of George Floyd, an unarmed African American man at the hands of police. A CNN poll published June 8 showed Trump's approval rating falling to 41% versus 55% for Democratic rival Joe Biden.

Yet it is Trump versus the yuan that will preoccupy Asia. The region is, after all, his scapegoat for America's every economic failing. Coinciding with a widening Chinese surplus, the yuan is an obvious and ready target for a president desperate to remind his base that he is fixing perceived trade inequities.

Trump has had about as much as he can expect from the Federal Reserve in terms of adding monetary stimulus. Other options include formally branding China a currency manipulator. Trump could direct U.S. Treasury Secretary Steven Mnuchin to weaken the dollar. The president and some Republican colleagues even broached the issue of defaulting on debt Washington owes Beijing. China holds nearly $1.1 trillion of U.S. government bonds.

Additional levies on Chinese goods are always an option. Trump could easily raise 25% import taxes to 30% or 35%. He could follow through with threats of 25% tariffs on cars and auto parts, which would disrupt supply chains everywhere. He might see the fallout from such policies -- and any retaliatory steps by China -- as an acceptable price for better poll numbers at home.

Few topics animate Trump more than currency shenanigans. In the 1980s, Trump the real-estate mogul complained often about Japan's trade practices. In 2016, he won the presidency accusing China of "stealing" and "raping" U.S. living standards. It is hardly a reach to think Trump's pronouncements will soon thunder with yuan-bashing and new policy provocations that further darken Asia's 2020 prospects and shake markets.

Timing matters. Xi's team would be wise to put a floor under the yuan. The more it slides, the more the trend will get onto the radar screen of a desperate leader raring for a new fight.