Ill-timed scandal for the 'Republic of Samsung'

To know where South Korea is heading, you can weed through mountains of government data, trade flows and analyst reports. But the real clues often come from the nation's corporate flagship.

Asia's fourth-biggest economy is not called the "Republic of Samsung" for nothing. The Samsung conglomerate can generate revenues equivalent to 20% of gross domestic product and dominates everything from electronics to credit cards, real estate and sports.

The probe comes at an awkward time for the broader Samsung Group. Its leader, Lee Jae-yong, is awaiting a Supreme Court ruling on bribery charges related to a separate political scandal. It also comes as politicians demand greater corporate transparency. 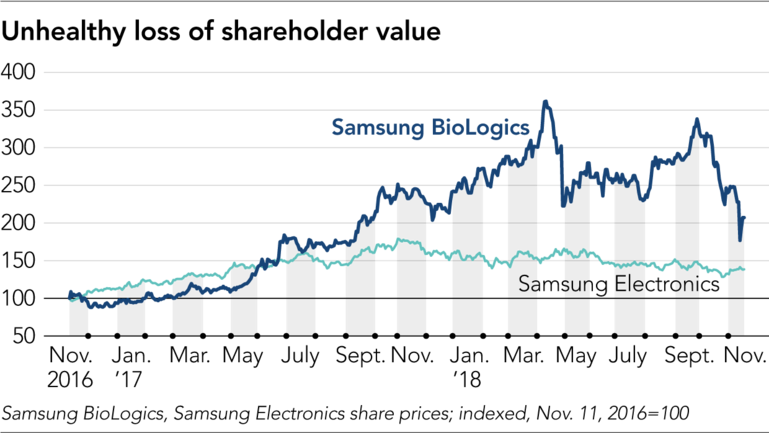 Here lies Moon's problem. It is not just Samsung that is in trouble; it is the whole economy.

Moon was elected in May 2017 to retool an economic system in midlife crisis. Competitiveness had waned, wages had stagnated, youth unemployment topped 9% and China's rising dominance had hit Korea's confidence. Moon pledged "trickle-up growth," a clear break with the top-down policies that champion family-owned chaebols like Samsung.

Then, plans to turn Korea Inc. upside down took a back seat to peace talks with North Korea. Now, as U.S. President Donald Trump's trade war threatens growth, Moon's team has some serious explaining to do.

Samsung's travails demonstrate why on two levels. Granted, the 2016 IPO that raised $2 billion happened on former President Park Geun-hye's watch. But Moon's team has been glacial about taking on the chaebol system. Promised steps to police monopolistic behavior, create more space for small-to-medium-sized enterprises and increase innovation remain on the drawing board. So do tax tweaks aimed at catalyzing a startup wave that reduces Korea's reliance on exports and -- and alters its reputation for copycat products.

BioLogics is a key part of Lee's succession plans. Though he is the de facto boss, Lee's father, the hospitalized Lee Kun-hee, is still technically chairman. Lee Jae-yong has run the show since his father's May 2014 heart attack. Investigations of past transactions pose new risks.

The "Crown Prince of Samsung," as Korean media call Lee Jae-yong, only got out of jail in February. He spent a year there in connection with bribery charges that put Park in prison (she is currently serving a 24-year sentence). Lee Jae-yong is appealing those charges at the Supreme Court. Only time will tell if BioLogics complicates his chances.

BioLogics represents a promise of future high-tech success for Korea's most important name and for Korea Inc. With China getting better at making cars and smartphones, Korea is seeing the rapid commoditization of its most lucrative industries. That has Samsung, and Seoul by extension, banking on biopharmaceuticals for growth. The same goes for artificial intelligence and 5G mobile technology, areas on which Samsung is placing big bets.

It is hard not to worry that a potential move to delist BioLogics -- and the specter of more troubles to come -- will distract the group from investing in future growth. Though the unit denies any wrongdoing, the Korea Exchange last week suspended trading in BioLogics shares for at least 15 days.

The bigger question is how Moon responds. Since the 1997 Asian crisis, every Korean leader pledged to curb the chaebol excesses that then hit the economy. Each talked big about shining daylight on their opacity and sheer size. Yet each stepped back, deferring to chaebol leaders, when they realized the magnitude of the task.

Park is an example. In 2013, she took office with bold designs on a more "creative" model. She talked of antitrust enforcement, taxing cash hoards that could be used to fatten paychecks and supporting smaller companies.

Within months of taking office, though, Park sat down with chaebol leaders, including Samsung's Lee Kun-hee, to ask them to help boost gross domestic product. That hinted at a quid pro quo: if they helped Seoul avert recession, Seoul might go easy on the chaebol. Park did more than just soft-pedal reform. In 2017, she was removed from office on bribery and influence peddling charges.

Moon now faces questions about his own determination to bring Korea Inc. to heel. In December 2017, he put a key win on the scoreboard: a corporate tax hike for top-earners to 25% from 22%. The first such move since 1991 was a shot across chaebols' bows. Since then, though, Moon's detente efforts with Pyongyang dominated the agenda.

Dimming prospects for the economy are slamming Moon's approval rating. Last week, it slid to 53.8% in a Yonhap News poll, the seventh-straight weekly drop. That dovetails with waning GDP prospects. Korea grew an annualized 2% in the third quarter, down from 2.8% in the second. That trajectory collides with a youth-unemployment crisis, frothy real estate prices and surging household debt.

Korea's ratio of household debt-to-GDP is outpaced only by China and Hong Kong. Bank for International Settlements data put it at 95.2% at the end of March, up 2.3 percentage points from a year earlier. No surprise consumers are frustrated with Moon's preoccupation with North Korea talks yielding few results.

Rather than redouble reform efforts, Moon's team is dabbling in policies that paper over problems. Case in point: a new $443 million public fund to prop up a Kospi index down 16% over the last 12 months. While not a huge amount for a $1.7 trillion economy, it looks terrible to the ordinary Korean.

Moon was elected to address the underlying causes of the "Korea discount," not treat the symptoms with Beijing-like Band-Aids. The Republic of Samsung is back in the headlines for precisely the reasons global investors undervalue Korea Inc. It is past time Seoul took on behavior denting the national brand.