In Modi's India self-reliance means you are on your own

Resumption of EU trade talks an admission that isolationism has failed Narendra Modi participates in an online summit with EU leaders in New Delhi on May 8: resuming talks with the EU marks a major shift in policy. (Handout photo from India's Press Information Bureau)
CopyCopied

On May 8, India's Prime Minister Narendra Modi attended a virtual meeting with leaders of the European Union taking place in Porto, Portugal.

Aside from the usual boilerplate, the main takeaway from the joint statement was a commitment "to enhance our trade and investment relationship to realize its untapped potential."

Specifically, the two sides agreed to resume talks on a bilateral trade agreement. Talks on such an agreement took place between the EU and the previous Indian government of Prime Minister Manmohan Singh and were shelved as long ago as 2013.

For the EU, resuming trade talks with India follows the controversy over the ratification of an investment agreement with China, which has faced criticism from human rights groups and some governments within the EU, as well as strong opposition from the U.S. administration of President Joe Biden. As India's external affairs minister S. Jaishankar said in an interview with Politico, the EU is therefore taking a "hedge bet" on India.

For India, which had put a pause on trade agreements when the Modi government first came to power in 2014, resuming talks with the EU marks a major shift in policy. India is also reportedly prepared to begin negotiations with the United Kingdom on a trade agreement, and there are even some suggestions that India may resume its long-stalled trade talks with Canada.

All of this represents a sea change in the rhetoric coming out of New Delhi. Before the current crippling second wave of the COVID-19 pandemic struck India with a ferocity that has left the country completely unprepared to cope, Modi's rhetoric had all been about Atmanirbhar Bharat, a Hindi term that translates roughly as "self-reliance."

In practice, this has meant tariff increases for the first time since India liberalized its economy in 1991 and an attempt to mimic an East Asian style state capitalism fusing big business and government at the commanding heights of the economy.

Modi's bravado that India could go it alone met its match with the second wave of COVID. Without any admission that the policy has failed, the rhetoric of Modi and his ministers rarely now mentions self-reliance but invokes a Sanskrit term from Hindu scriptures, Vasudhaiva Kutumbakam, or "the world is one family."

The implied message is that India is interconnected with the rest of the world in a web of mutually beneficial interactions and not a country moving back into autarkic self-reliance.

The first major about-face demonstrating this shift was the government's decision to accept foreign aid to fight the pandemic, nearly twenty years after previous governments decided India no longer needed foreign assistance. The aid consists of basic tools including oxygen, medicines and other critical medical supplies in short supply in India.

In the Politico interview, Jaishankar admitted that the decision to accept foreign aid was a tough sell, given the optics in terms of domestic politics. Likewise, the resumption of trade talks is an implicit admission that the goal of self-reliance has failed.

Modi himself had pointed with pride to the success of the Serum Institute of India (SII), the world's largest vaccine manufacturer by volume. SII has been making the Oxford-AstraZeneca vaccine in India under license, and some of these doses were used by the Indian government as part of its vaccine diplomacy. 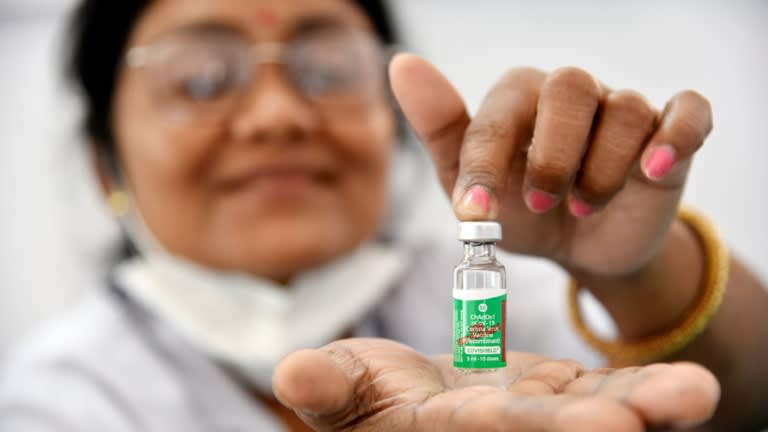 A health worker shows a Covishield dose manufactured by Serum Institute of India: Modi had pointed with pride to the success of SII.   © NurPhoto/Getty Images

But with India now brought to its knees, exports have been suspended, thus causing SII to abrogate its contractual obligations. India will be forced to rely on vaccines imported or donated from abroad until manufacturing capacity at home ramps up in the medium to long term.

SII has been seen as a national champion and pillar of self-reliance by the proponents of the doctrine. So when its CEO, Adar Poonawalla, decided to pivot away to some operations in the U.K., which includes an investment of $300 million on research and development and possibly even the manufacturing of vaccines there, such developments are not exactly a ringing endorsement for the doctrine of self-reliance.

The SII saga is also a microcosm of the Modi government's mismanagement of the doing business environment in India. Far from incentivizing SII to increase its manufacture of COVID vaccines, the Indian government capped what SII could charge for its vaccine doses, thus limiting its expansion and quite possibly contributing to India's vaccine shortages at present, and very likely an impetus for SII's attempt to relocate partially to the U.K.

So what of Modi's much-vaunted self-reliance? The bitter joke making the rounds in India is that it really refers to the fact that every Indian is now forced to be self-reliant in dealing with the second wave, including procuring their own oxygen, given the government's abject failure to prepare for and manage the crisis.

If there is a silver lining, it may be that Modi's hubris that India could go it alone in the world has been replaced by a realization that India's future success or failure depends on greater integration into a more and not less globalized world economy. After all, if a country cannot ensure the health and safety of its citizens, what is the meaning of self-reliance?