In Vietnam, Monsanto is guilty until proven innocent A 41-year-old man who was exposed to Agent Orange, pictured at his house in Bac Ninh province in August 2018: time is running out for Vietnamese victims.   © Reuters
CopyCopied

Dien Luong is a Vietnamese journalist who has covered the issue of Agent Orange for over a decade. Opinions expressed here are his own.

For nearly half a century, Vietnamese victims of Agent Orange have been fighting a losing battle against multinationals that manufactured the toxic defoliant. Their plights have been ignored, their lawsuits dismissed and their voices drowned out.

That David-and-Goliath struggle came to the fore again last month when a French court rejected a lawsuit by a Vietnamese-French woman against 14 chemical manufacturers that produced and sold Agent Orange. Sixty years ago this August, the U.S. Air Force began spraying some 12 million gallons (45 million liters) of the herbicide, containing highly toxic dioxins, over a large portion of southern Vietnam.

The plaintiff, Tran To Nga, who is now 79, first filed the lawsuit in 2014 seeking damages from several companies including U.S. Monsanto acquired by Germany's Bayer in 2018 and Dow Inc.

After the French court ruled that it did not have jurisdiction to judge a case involving the U.S. government's wartime actions, Nga told the media that despite her disappointment, she would appeal. In response to the court's decision, Bayer/Monsanto reiterated its default position that "wartime contractors... are not responsible for the alleged damage claims associated with the government's use of such product during wartime."

It would be unrealistic to expect Western media to strike a more sympathetic tone toward Nga. Still, the somewhat formulaic approach of "covering both sides of the story" without proper context risks oversimplifying the history of Agent Orange and Vietnam's perplexing relationship with Monsanto. It also risks overlooking what remains the most salient issue between the U.S. and Vietnam since the normalization of relations in 1995.

Despite Monsanto's repeated denials of its responsibility for Agent Orange, one public document after the next have disproved this well-worn defense argument. According to the Poison Papers, a public data trove that contains over 20,000 files about the chemical industry, although Monsanto and other manufacturers of Agent Orange knew about the dangers it posed to humans, they concealed this information before supplying it to the U.S. government.

And even though Nga's lawsuit was rejected, it still carries a message for Washington: The wounds inflicted by Agent Orange in Vietnam -- the very country it is courting as a buffer against China -- have not healed yet. Yes, the U.S. government has so far allocated around $400 million to clean up hot spots and help Vietnamese victims with disabilities in areas heavily sprayed with Agent Orange, but it also stressed that such assistance was "regardless of cause." 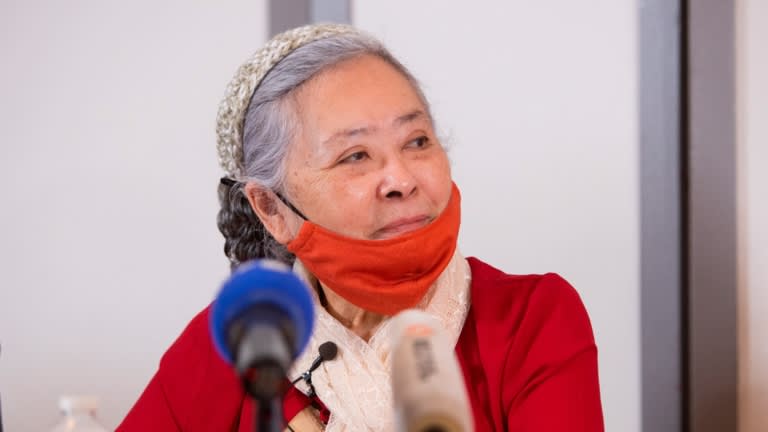 Tran To Nga gives a press conference in Paris on May 11, a day after she failed in her bid to sue Monsanto: it still carries a message for Washington.   © Sipa/AP

A stark reality has set in. While the U.S. acknowledges a number of conditions and diseases that are presumed to have been caused by exposure to Agent Orange in its own veterans, and has compensated them accordingly, it has refused to do so for the Vietnamese who were on the receiving end of the spraying.

In late May, Rep. Barbara Lee of California introduced a bill seeking to provide financial aid for Vietnamese victims and further help with the cleanup of Agent Orange-contaminated areas. But one of the bill's other aims -- to expand research on Agent Orange and its effects on the health of exposed individuals -- could ironically sidetrack the flow of the much-needed financial aid.

Past U.S. administrations have dawdled on conducting any across-the-board joint study on the true extent of the health effects of Agent Orange, blaming Vietnam for stalling progress. Such finger-pointing is anything but helpful, because time is running out for Vietnamese victims.

As the U.S. government has launched cleanup campaigns at two former air bases where Agent Orange was transported and stored during the Vietnam War, its aid should keep going directly toward ridding the environment of the toxic defoliant and supporting the victims. It is also time Vietnam obliged Monsanto -- even in the post-Bayer acquisition era -- to steer its profits toward contributing to the cost of the cleanup.

Monsanto has consistently maintained that the company today is completely separated from the version of Monsanto that manufactured Agent Orange, stating that its core business is now focused on agriculture. But the problem here is that Monsanto's present and future are very much tethered to its chemical past. There is no better exemplar of this conundrum than Monsanto's flagship product, the glyphosate-based herbicide Roundup. Monsanto recommends using Roundup -- the world's most heavily used weed killer -- with its genetically modified seeds, and has successfully marketed both products in Vietnam since the mid-2010s.

Until, that is, Roundup became the target of a spate of U.S. lawsuits alleging that exposure to glyphosate causes cancer, with Vietnam banning the further import of glyphosate-based herbicides in 2019.

Vietnam has every reason to be skeptical about what Monsanto has to say about glyphosate. Vietnamese authorities should also stop burnishing the Monsanto brand, such as when they twice honored it as a "sustainable company" prior to its 2018 acquisition.

To the victims of Agent Orange who keep fighting for justice and many other Vietnamese, given the company's dark past and controversial present, Monsanto is guilty until proven innocent.