India is well placed to beat the omicron variant A woman walks in a market area in Jammu in August 2021: India's rather laissez-faire approach may finally yield some benefit.   © AP
CopyCopied

As the world confronts the rising wave of omicron variant infections, will India be ready this time around?

Memories are still fresh from the devastating delta wave of COVID that ripped through India in the spring of 2020, leading to a huge spike in infections and deaths.

As documented in detail by Bloomberg News last month, "How Errors, Inaction Sent a Deadly Covid Variant Around the World," matters were made worse by inadequate preparation and a seriously botched public policy response by Prime Minister Narendra Modi. Hung up on vaccine diplomacy, Indian-made batches of the AstraZeneca vaccine, called Covishield, were deployed worldwide, with Modi and his ministers touting India's prowess as the "pharmacy of the world."

But with not enough jabs in arms back home, India was left woefully unprepared for delta. Genome sequencing was insufficient and behind schedule, hampered by a mercantilist government policy that restricted imports of much-needed medical equipment in a vain effort to shore up the domestic industry.

India's leaders not only failed their own population, but they also did a disservice to the world, delaying by several months vitally needed information on the delta variant to allow other countries to prepare, in sharp contrast to South Africa, which speedily made available information on the omicron variant without delay.

A slew of recent research has shown that India's official COVID death count likely represents a gross underestimate of the true number of fatalities. Many patients who ended up dying from the virus were never properly diagnosed to begin with, and, in poorer rural area many deaths simply went unrecorded, a situation that long predates the pandemic.

According to one study published in the peer-reviewed journal Science magazine on Jan. 6, led by University of Toronto professor Prabhat Jha, there were as many as three million excess deaths in India, that is, deaths over and above what was officially recorded. The researchers came to this conclusion by examining multiple data sources and surveys and then extrapolating total likely deaths through a model-based analysis.

That study's findings tally with the findings of previous research, all of which, using different methodologies and data sources, conclude that COVID deaths were seriously underreported in India. Official statistics say that only about 400,000 people died due to COVID during the delta wave from April to July 2021. However, the actual death toll is estimated by Jha and his co-authors at about 2.7 million during this period.

So, has India learned critical lessons from the delta fiasco and is it, therefore, better poised to deal with omicron? There is some good news. At present, almost 45% of the population has received two vaccine doses. And at long last, those under 18 are finally eligible for vaccination, with booster doses for those over 60 with comorbidities slowly being rolled out. What is more, given the very high infection rate, millions of Indians have likely acquired natural immunity.

Seroprevalence studies, which indicate the prevalence of COVID based on blood serum testing, suggests that 87% of people in Mumbai and 97% of people in Delhi, India's two largest cities, were found to be carrying COVID-19 antibodies, either through vaccination or in many cases through natural immunity.

Given that omicron is now conclusively established to be less severe than delta, this augurs well for a lower impact in terms of serious illness, hospitalization and death than delta. There is some hope, therefore, that India's omicron wave will likely resemble South Africa's, which has a similar population profile of many young people carrying antibodies from prior infection and which proved to be far less devastating than many feared initially.

India's creaky medical system also seems to be somewhat better prepared now than it was prior to the delta wave. In particular, oxygen production capacity has been ramped up across the system. What made an already bad situation worse during the previous wave was that many hospitals ran out of oxygen for patients on ventilators, with even many affluent Indians left scrambling for oxygen cylinders wherever they could find them and at whatever price. 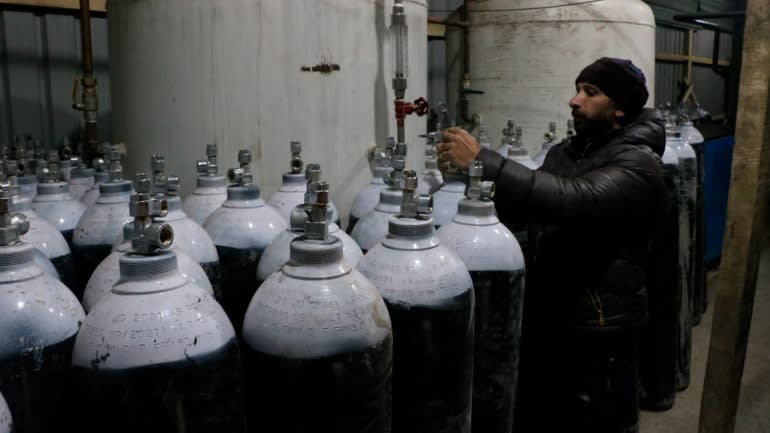 A worker prepare refilling oxygen cylinders for supply to a hospital in Srinagar on Jan. 10: India's creaky medical system seems to be better prepared now than it was prior to the delta wave.   © Sipa/AP

So far, while Indian cases are rising sharply, as they are just about everywhere else, according to official data, only 5 to 10% of those infected have so far wound up in hospital. This compares to about 20% or more during the peak of the delta wave in May last year.

Ironically, after an initial and very harsh lockdown, India's rather laissez-faire approach may finally yield some benefit. Unlike the many Western countries that tried to eliminate COVID, Indians, often at a very high cost, have had to learn to live with the virus.

With so many people having recovered from an infection and many others now vaccinated, the optimistic scenario is that India will ride through omicron with far reduced hospitalizations and deaths. Many Western nations, by contrast, with their much higher immune naive populations, are now facing the prospect of combating omicron while delta is still circulating.

While countries such as the Netherlands and Canada are in crisis mode, reimposing strict lockdowns in a vain attempt to curb the spread of the virus, India is now hopefully approaching the endgame of the pandemic.