Dark clouds hang over Mumbai skyline ahead of cyclone Nisarga on June 4: India is vulnerable to the effects of climate change.   © Hindustan Times/Getty Images
CopyCopied

Dr. Arunabha Ghosh is CEO of the Council on Energy, Environment and Water in India and lead author of "Jobs, Growth and Sustainability: A New Social Contract for India's Recovery."

"All calm now," wrote a Mumbai-based friend on June 3. Cyclone Nisarga had made landfall a few hours earlier, 96 km to the south. Mumbai residents had been spared the brunt of the strongest tropical cyclone to hit Maharashtra state in June since 1891.

Two weeks earlier, another coastal city, Kolkata, had not been that fortunate. Amphan, the first super cyclone in the Bay of Bengal since 1999, had ripped through India's eastern coast and Bangladesh, flattening the Sundarbans delta. The state government estimates damages have exceeded $13 billion.

India, with its 1.4 billion people, is especially vulnerable to the effects of climate change, from intense cyclones to extreme droughts. In fact, it was the fifth-worst country affected by extreme weather in 2018, according to the Germanwatch think tank, with 2,100 deaths and losses of $38 billion in purchasing-power terms.

Last week, India published its first official climate change assessment, whose most sobering finding was that the impact of climate change will be far worse on India than the global average. Now India must boost its defenses.

The climate change assessment had frightening findings. The average temperature in India increased 0.7 degrees Celsius during 1901-2018 and if emissions continue at the high end of the predicted range by 2100 the temperature could rise 4.4C relative to the 1976-2005 average. Such temperature extremes will particularly impact the Indo-Gangetic plain, home to 480 million, putting lives and livelihoods at severe risk. 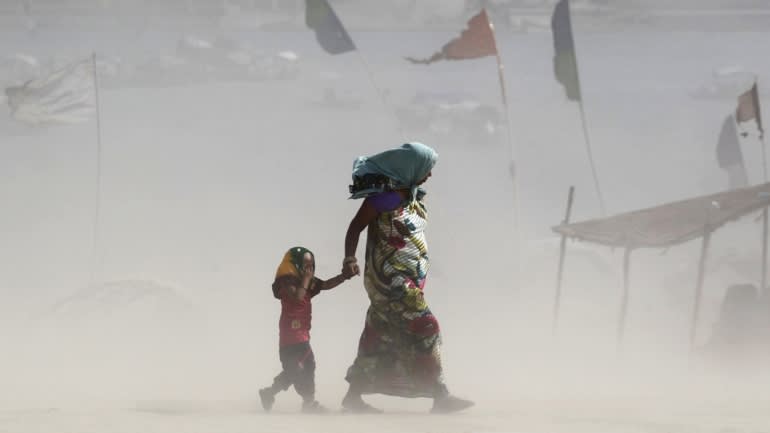 A dust storm on an extremely hot day in Allahabad, pictured in June 2015: the frequency of heat waves could increase three to four times.   © Reuters

The Council on Energy, Environment and Water has calculated that India has already experienced 478 extreme weather events since 1972, most occurring after 2005. The frequency of cyclones is rising, jumping from 33 in the 1980s to 58 in the 2010s. From 1998 to 2017 climate-related disasters caused $80 billion of damage.

Over the years, India's Meteorological Department and National Disaster Management Authority have greatly improved coordination to save thousands of lives. In 2019, when Cyclone Fani hit Odisha, early warning systems helped evacuate 1.2 million people within 48 hours. There were 64 lives lost compared to nearly 10,000 deaths when a super cyclone struck Odisha in 1999. What India needs is a comprehensive plan for resilience at the federal, provincial and local levels.

First, the government and research institutions should design a Climate Risk Atlas to map critical vulnerabilities. Granular data would inform a national environment and health risk index. With high-resolution analysis of 700-plus districts, each state can build its own risk index. National and state indexes could then be linked to disaster risk reduction plans.

Third, infrastructure must be climate-resilient. Analysis of coastal and inland cities finds that temperature extremes impair road surfaces and cause water reservoirs to run dry, while intense rainfall damages low-lying areas. Climate-resilient infrastructure is expensive -- but the costs of doing nothing are higher.

Fifth, a unified emergency response framework would train citizens on how to behave in an emergency. India can learn from Japan: after the Fukushima nuclear accident, Japan issued standardized emergency guidelines for residential areas.

Finally, India must work with other major economies to forge an insurance cushion against climate risks. Globally, weather-related insurance losses -- $55 billion annually -- have increased five times since the 1980s. A Global Risk Pooling Reserve Fund would combine environmental and health risks across countries to spread them and ensure a payout when climate disasters strike.

In 2019, India announced a global Coalition for Disaster Resilient Infrastructure at the U.N. Climate Action Summit after consultations with more than 35 countries. The latest climate assessment is another sign that India has growing concerns about climate risks. But there is also a possibility that a post-pandemic economic recovery will take priority over climate resilience. That would be myopic and damaging. Instead, building resilience will create jobs, additional investment in physical and natural infrastructure and save against future losses.

All might be calm for my friend in Mumbai, for now. But we cannot just hope for the best. India must prepare for the worst.