Young leaders are leaving as dynasty members get undeserved promotions Rahul Gandhi addresses the crowd during a public gathering ahead of Delhi assembly elections at Kondli on Feb. 5: the Gandhis have been running the Congress Party like a family business.   © Hindustan Times/Getty Images
CopyCopied

When Jyotiraditya Scindia, an influential young leader, abandoned India's Congress Party in March, it signaled a crisis in the "grand old party." The Gandhi family who have been at its helm for years are fast becoming a burden, and party workers are demotivated. There are rumors that another popular young leader, Sachin Pilot, might dump Congress too.

Congress is in crisis just when India needs an alternative to the divisive politics of the ruling right-wing Bharatiya Janata Party. It is time for it to act -- and take what might once have been considered extreme measures.

Founded in 1885, the Indian National Congress or Congress Party fought and led India into independence from British rule under Mahatma Gandhi, the country's most prominent political figure. Since India's first prime minister, Pandit Jawahar Lal Nehru, a close associate of the Mahatma, the Gandhi family has been at Congress' forefront. Critics say that the Gandhis have been running it like a family business.

Since leaving Congress, Scindia has joined the BJP, which immediately rewarded him with a ticket to the upper house of the Indian parliament. Switching to an ideologically opposed outfit to better your career prospects reflects badly on the integrity of the country's political class, argue critics. What it highlights, though, is Congress's inability to keep its flock together. 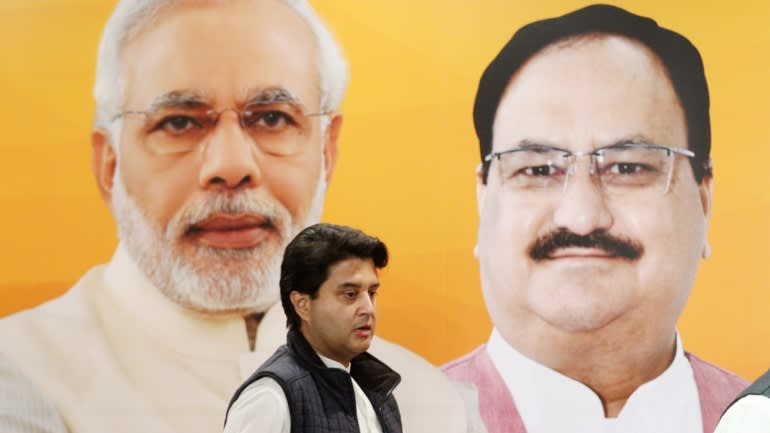 The BJP rewarded Jyotiraditya Scindia with a ticket to the upper house of the Indian parliament.   © India Today Group/Getty Images

It raises other questions: is Congress giving enough space to its young and ambitious leaders -- who are not from the Gandhi family -- to grow? The family no longer remains the vote-getting machine it used to be; in the last general election, Congress won 52 seats to the BJP's 303. Why, then, does Congress want to stick with their leadership?

It is not that other political parties do not promote the sons and daughters of their senior party leaders -- they do. But they still have to work hard to climb the political ladder. Prime Minister Narendra Modi did not become the BJP's leader out of the blue -- he had been chief minister of Gujarat state.

Similarly, Anurag Thakur, the son of a former chief minister of Himachal Pradesh state, won a seat in the Lok Sabha -- parliamentary -- elections twice before he was made into a junior minister in Modi's cabinet.

In contrast, despite the repeated failures of Rahul Gandhi in all his major political projects, including leading the 2014 general election campaign, and with no administrative expertise or achievements, Congress made him its prime ministerial candidate in 2019.

It is this seeming entitlement by the Gandhis which does not resonate well with Indian voters. Worse, it is forcing young and ambitious second-rung leaders like Scindia to dump Congress for greener pastures outside.

Rahul Gandhi could have started early as a junior minister in the center-left United Progressive Alliance coalition in power 2004-09, then as a senior minister in the second UPA government from 2009 to 2014, to show that having a Gandhi surname is not his fault. But he missed that opportunity and that is why he has a weak claim over the party's or country's leadership.

Nowadays, even family businesses are thinking of replacing incompetent family members with professional managers. That logic applies to political parties, too, in a competitive marketplace. The best course of action would be to dump the Gandhis and hold elections for a leader to guide the party through the most difficult time in its history.

On the other hand, many think that without the Gandhis Congress will not survive, and not without reason -- the Gandhis have been the top vote-winners and have kept the party together. That presents a major dilemma for Congress -- but it cannot keep postponing the question of leadership.

In case the party does not want to dump the Gandhis yet, it would make sense to ask the younger Gandhis to start as ministers or chief ministers. They should work hard and prove that they are capable. However, that would require a clear mindset change. The question is: are the Gandhis capable of doing that? I have my doubts.

Weak opposition in a democratic country like India has serious implications: the Modi government seems confident about holding on to power irrespective of how badly the economy does.

It is devoting its energy and resources to implementing its core political projects such as fixing citizenship issues rather than fixing the economic mess it has created over the years through its ill-advised demonetization move and a messy rollout of the goods and services tax.

The imposition of a countrywide lockdown because of coronavirus without adequate planning and coordination with states is the latest example of mismanagement by the Modi government.

With the country facing challenges on multiple fronts, including a worsening economic crisis that is likely to chop off as much as 5% from the country's GDP in the current fiscal year, India needs a strong opposition with a clear alternative political vision to the BJP. Many Indians still want a genuine secular and democratic country with a focus on the economy and job creation but few believe that Congress can deliver that under the uninspiring leadership of the Gandhis.