The deaths of 20 of India's soldiers in violent clashes with China along a disputed Himalayan border last month laid bare more than just its military shortcomings.

Believing that its dependence on Chinese investment, goods and mobile apps made it vulnerable in other areas, India decided that it must decouple from China's economy and instead try to strengthen its own industries. Imposing new restrictions on Chinese investments, and banning 59 Chinese mobile apps, India is also considering raising import barriers on up to 300 Chinese products.

Wary of a full-fledged military confrontation with China, voters appear to agree on the need to teach Beijing a lesson and like the idea of India becoming more self-reliant. What they may not understand is that instead of hurting China, New Delhi's tough response could end up raising costs for local industries and shortchanging Indian consumers.

What China buys from India, mostly raw material such as cotton or iron ore, it can buy from multiple sources. But for what India buys from China, such as electronics, solar panels, active pharmaceutical ingredients, or APIs, batteries and electric vehicle parts, there are few alternative suppliers that can match deliver in terms of speed, scale and price.

Denying Indian manufacturers access to cheaper Chinese supplies and materials will hurt sectors including retail, real estate, hospitality and tourism by raising their input costs. That, in turn, will raise the price of goods and services and hurt the same Indian consumers who are most vocal supporters in their support of the "boycott China" campaign.

Another retaliatory measure is banning Chinese companies from bidding for Indian road contracts, even in joint ventures with local partners, but this will penalize taxpayers by raising the cost of building new roads and highways.

Restricting Chinese investment, a major source of venture capital, will hit India's tech startups that are shunned by local banks worried about excessive risk and high initial cash burn rates. Even low-hanging fruit such as banning Chinese apps has costs such as potential job losses and investment foregone. For instance, TikTok, which employs 2000 Indians, has said that it would invest $1 billion in India over the next three years.

This does not mean New Delhi cannot reduce its dependence on China, but achieving that will require tougher internal reforms such as reducing the compliance burden on small business, and cutting taxes on discretionary spending.

India needs to get smarter about negotiating better free trade agreements, or FTAs, that actually support domestic manufacturing and rein in contradictory regulations that push up manufacturing costs. A good example is steel, a vital input that is needlessly expensive in India thanks to protectionist policies, raising costs for a host of downstream industries including automotive, capital goods, construction and home appliances. Unable to compete with cheaper Chinese goods, these industries are handicapped both at home and in overseas markets. 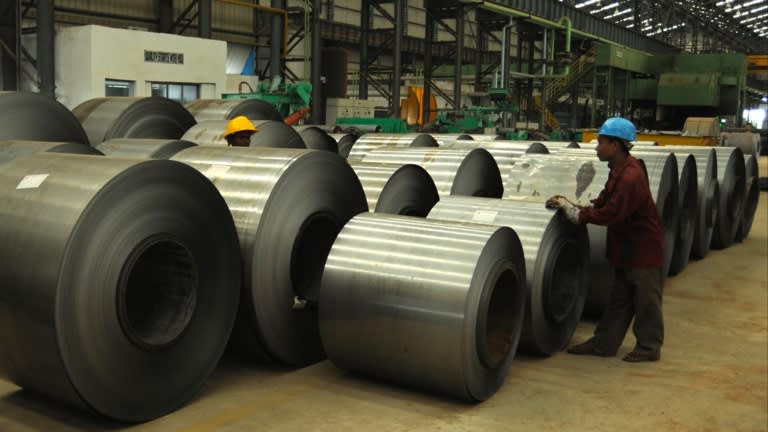 Steel is needlessly expensive in India thanks to protectionist policies.   © Reuters

If India is serious about promoting local manufacturing, it should apply import duties, with the lowest rates on raw materials and the highest tariffs applied to finished products. That will propel the domestic production of higher value items, and encourage exports over imports.

India's small and medium-sized enterprises, which account for 45% of India's manufacturing output and remains the second largest employer after agriculture, are overburdened by multiple licensing requirements and other regulations that should be addressed urgently.

For too long, India has been exaggerating the economic potential of 1.3 billion people. What really matters is purchasing power, not population size. Mercedes-Benz sold 14,000 cars in India last year, compared to 700,000 in China, while India's per capita income of $2,000 is still much lower than China's $10,000.

Higher taxes that reduce disposable incomes ensure that India's consumer market cannot realize its potential. By reducing the goods and services tax on nonessential goods such as cars, the central government could boost discretionary spending.

Similarly, while FTAs can help expand access to overseas markets, India has failed to exploit their potential, forgoing agreements with the EU, Central Asia and Latin America. Those that it has signed, with ASEAN, Japan and South Korea, do not help exporters. It is time to fix this anomaly. To grow faster, India needs to export more and FTAs can help.

Taken together, these measures will make local manufacturers nimbler and better able to withstand competition from China, as well as expand market size and help businesses reap the benefits of economies of scale. By trying to block China, India will only end up enriching a class of entrenched rent-seeking cronies at the cost of Indian consumers.