India's return to RCEP is in everyone's interests 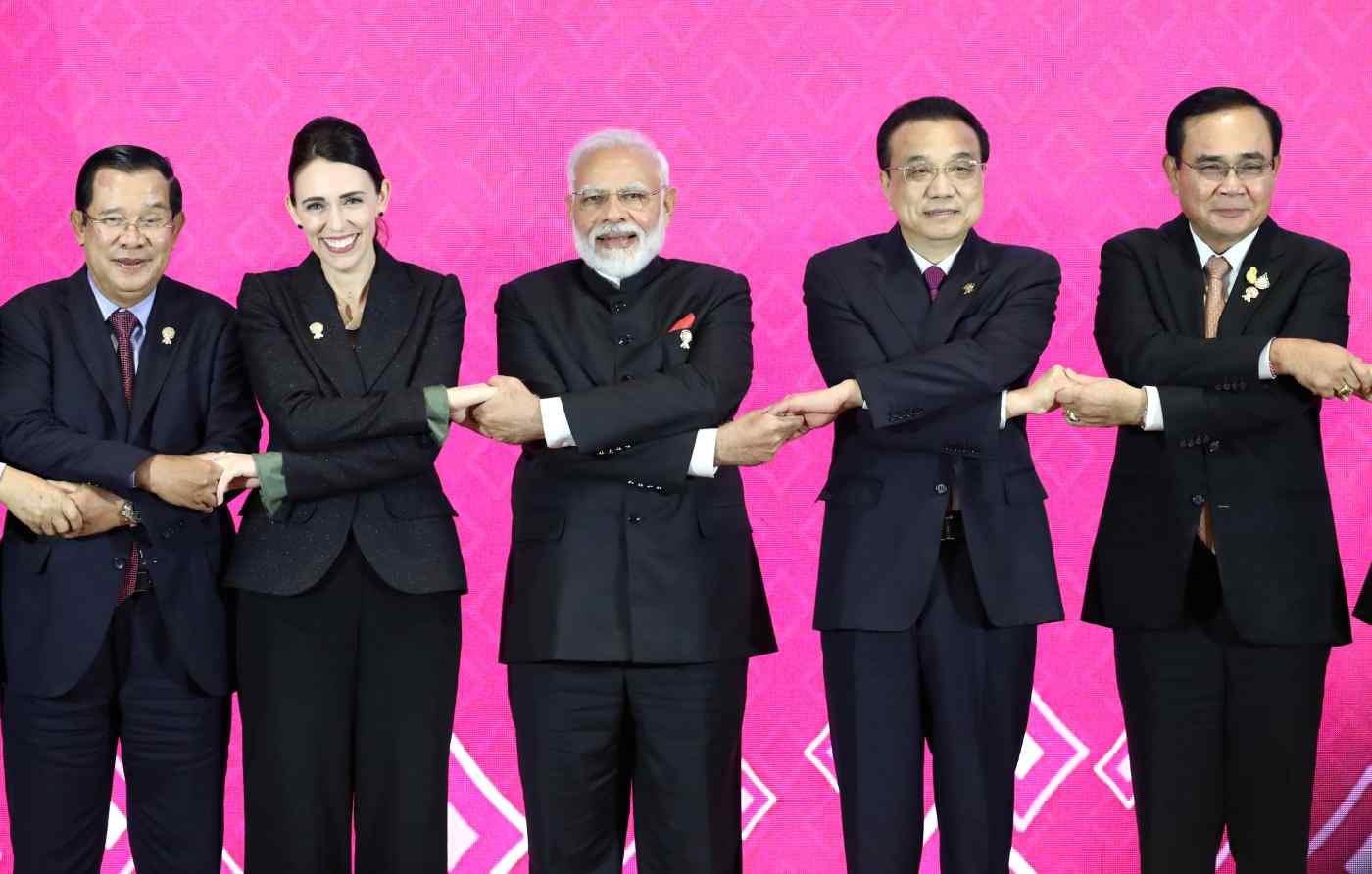 Narendra Modi, center, and other leaders shake hands at the third RCEP summit in Bangkok in November 2019: hope of India's return has not entirely faded.   © Reuters
CopyCopied

Dr. Jagannath Panda is a Research Fellow and Centre Coordinator for East Asia at the Manohar Parrikar Institute for Defence Studies and Analyses, New Delhi.

When India walked away from the Regional Comprehensive Economic Partnership in November 2019, Prime Minister Narendra Modi said India had "outstanding" concerns with the free trade agreement between the 10 ASEAN nations, China, Japan and others, covering 40% of the world's gross domestic product.

The reality is that India was concerned to expose the weaknesses of its domestic market to superior economies.

Though the hope of India returning to RCEP has not entirely faded, and Vietnam, the current ASEAN chair, wants to act as a "bridge with India," ASEAN members need to figure out the prospects for RCEP in a post-COVID world. For now, the focus on building alternative supply chain networks, and the recovery of regional economic fortunes are gaining momentum.

Anything they can do to bring India back is smart: it is not just in New Delhi's interest to rejoin but that of the whole bloc.

A number of factors shaped India's decision to withdraw from RCEP. While a "lack of concrete assurance" over market access and non-tariff barriers for Indian companies became a prime reason, crippling trade deficits with the majority of RCEP participants, 11 out of 15, came as the stumbling block.

Opposition stemmed from India's domestic constituency, where its manufacturing and services sectors were not competitive enough to protect the national interest. Reactions from farmers and industrialists alike encouraged India not to go ahead with RCEP. Demonstrators against RCEP are hit by police water cannon in Chandigarh in May 2019: reactions from farmers and industrialists alike encouraged India not to go ahead with RCEP.   © Reuters

An immediate return is uncertain, then, but neither ASEAN nor its dialogue partners like Japan and Australia have ruled it out. New Delhi's return will now be contingent upon a consensus which India must develop with all relevant partners in the Indo-Pacific, with Japan and Australia leading.

Japan's view that it would like to sign RCEP only if negotiations include India is a strong support for New Delhi's re-entry. Aside from the benefits to its exporters, it cannot afford to let RCEP turn into a China-dominated economic zone. Nor should it overlook a prospective partnership with India to advance a regional free-trading environment which promotes quality infrastructure and connectivity. RCEP featuring both countries would suit their mutual foreign and investment policies too.

New Delhi's return to RCEP would also depend upon the extent to which Australia could garner support in the region in India's favor. It too should want to prevent RCEP from being swayed by Chinese economic power. This is now of the utmost strategic importance given that India and Australia signed a Comprehensive Strategic Partnership in June.

Further, Australia's "Indian Economic Strategy to 2035" report promises greater Australian exports to India while enhancing foreign direct investment and people-to-people contact. Such an ambition would obviously remain incomplete if New Delhi does not partake in the regional value-chain that RCEP promises to build.

More importantly, India's return to RCEP would solidify the Australia-India-Japan network in the Indo-Pacific, promoting economic ties to strengthen regional cohesion against Chinese interference. Informal talks to promote a Supply Chain Resilience Initiative (SCRI) is already underway among those three countries, with a forthcoming India-Japan summit likely to discuss the idea at length.

India's return cannot be a one-sided affair. It needs to see how it would benefit too. Though its decision to withdraw was based on its growing confidence as an Indo-Pacific power, it cannot deny the opportunities presented by supply-chain networks, especially considering its ambition of emerging as a $5 trillion economy by 2025.

The pressing conditions created by the coronavirus should encourage India to have a fresh perspective on returning. In a situation where Asian economies are facing the brunt of the pandemic, a regional free trade agreement could be the way to economic recuperation. RCEP is an inclusive model that should not overlook India's interests, nor should India overlook RCEP's benefits.

In truth, even China should want India back. Beijing has been reeling from its trade war with the U.S., as well as taking an aggressive stance toward India over a border dispute, so signing RCEP would show its muscle. With India out of the deal, Beijing's search for new markets has faltered.

India's return to RCEP, then, is both politically practical and economically desirable for all concerned.