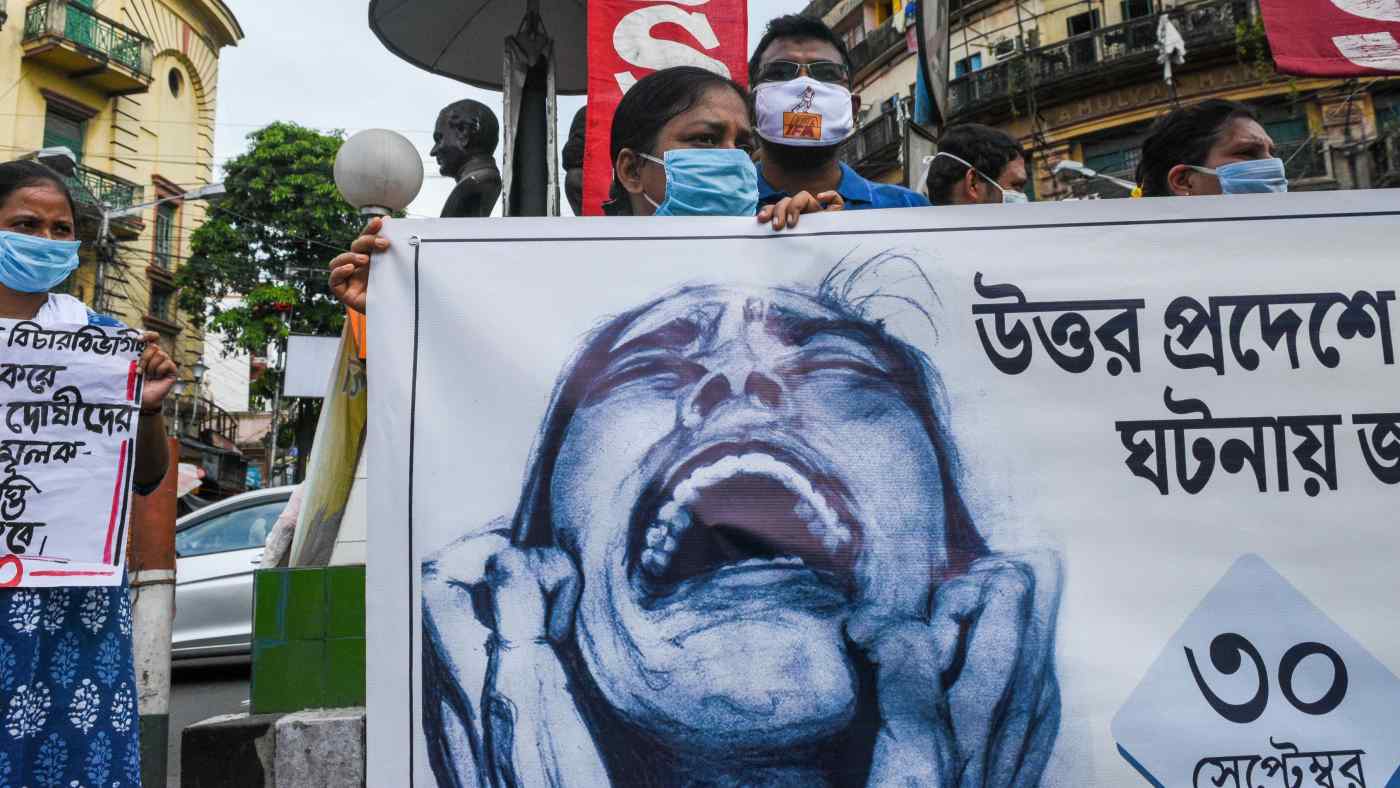 Demonstrators hold a placard during a protest rally against the rape of a 19-year-old Dalit woman in Kolkata on Sept. 30: what we see is a travesty of justice.   © NurPhoto/Getty Images
CopyCopied

Even for those of us inured to the horrific and unceasing headlines detailing sexual violence against women across India, the brutal rape and murder of a 19-year-old Dalit woman last month in Uttar Pradesh has been exceptionally hard to process.

As she was being strangled, her tongue was severed and her spinal cord broken, leaving her paralyzed below the waist. She died two weeks later in a New Delhi hospital.

After her death there was the usual outrage on social media, in national newspapers, and on television, as local government officials tried to brush aside the crime as "fake news." And even though the victim was able to file a complaint -- even naming her four assailants -- senior police denied that she had been raped or that her tongue had been cut out.

Even before that furor died down came news that the woman's body had been forcibly cremated by local cops in the middle of the night, while they kept her parents locked up against their will inside their home.

In death she was denied dignity, just as she was denied dignity in life as a Dalit, a member of the lower caste formerly known as untouchables. In India, everyday power struggles are fueled by caste and communal politics: the woman's rapists were upper-caste men and are unlikely to face severe punishment.

Reports of rape, meanwhile, continue to pour in from across the country. Also in Uttar Pradesh, just a day after the atrocity described above, 18 more rape cases were reported.

India had begun the year with news of the rape and murder of a 26-year-old veterinary doctor in Hyderabad -- a crime that sent shock waves through the country and had people baying for the blood of the attackers. This time the police did react, rounding up a few men at random and shooting them dead in a late-night execution they referred to casually as an "encounter" with the rapists. It was a victory for vigilantism.

It is now known as the Hyderabad rape. Prior to that we had the Kathua rape, then the Unnao rape. And now there is Hathras, after the district in Uttar Pradesh where last month's outrage occurred. Things have got to a state where rape victims don't have an identity beyond the place where the crime took place.

All these stories follow a similar arc: public anger after the crime, followed by delayed and incomplete justice. And more often than not, what we end up with is a travesty of justice.

And the crimes go on, undeterred. In 2019 alone over 400,000 crimes against women, including 87 rapes a day, were registered across India. And, it is important to note, only a fraction of sexual crimes are actually reported. That means that the real incidences of crimes against women are most likely exponentially higher.

Often the victims are young girls -- sometimes even babies, and children under 10. But age does not seem to be a factor one way or the other. Last month an 86-year-old woman was raped in Delhi.

Of course, sexual violence is not unique to India. Women all over the world live with the threat of violence, not just from their domestic partner but from other family members or strangers. What is so disturbing in India is the trend toward "gang rape," a crime that has come to be included in our everyday vocabulary. This is when a group of men commit rape together, often in places torn by war or political strife. In India though, it seems that savage gang rape is more the expression of a deep-seated hatred toward women.

After conducting over 100 interviews with convicted rapists following the notorious gang rape and murder of Jyoti Singh in New Delhi in the winter of 2012 -- a case that finally shook the nation awake -- academic researcher Madhumita Pandey found that gender norms about masculinity, and what was deemed proper behavior for a woman, are so deeply ingrained that rape is seen as an acceptable way to teach women "a lesson." Actress Shabana Azmi consoles the mother of rape victim Jyoti Singh during a protest rally for a speedy trial on the third anniversary of the gang rape in New Delhi in December 2015: the crimes go on, undeterred.   © Hindustan Times/Getty Images

But despite the unprecedented outrage that followed the 2012 rape, nothing has changed. The responses from the legal system, the police, the government, the press -- it all amounts to a collective failure of society. Rape victims rarely get treated with sensitivity or empathy when they file complaints. Victim blaming is rampant, and prosecutions are rare.

Above all, blame must fall squarely on a culture that values men over women from the day they are born. According to the 2011 census, India's gender ratio was a shockingly low 918 girls for every 1000 boys below the age of six. These "missing" girls are the victims of female feticide. In India, misogyny begins at home and is reinforced by a popular culture that portrays women as second class citizens.

It is ironic that all this is happening under Prime Minister Narendra Modi's Beti Bachao scheme -- a call to "save our daughters" and educate them. The truth is, we are failing women. Thousands of them, every year, just like the 19-year-old Dalit woman who will forever be known as the Hathras victim.