Taxes on petrol and diesel in India account for around 69% of the retail price, the highest in the world.   © Hindustan Times/Getty Images
CopyCopied

Indian consumers may recently have noticed a paradox: in mid-June, retail petrol and diesel prices surpassed levels at the start of the year, even though the coronavirus has routed oil prices and is still keeping them low. Why was this?

The government had the answer: central and state authorities had ratcheted up taxes on transportation fuels in May to boost state revenues during the economic slump. That hike more than canceled out the slump in crude prices.

This contrast, between the sharp and sustained slide in headline crude prices and stubbornly high retail prices, has reignited debate over how to split the advantage between governments hungry for cash and consumers desperately looking to save on petrol, diesel and cooking gas.

In New Delhi, petrol is currently priced at 76.26 rupees a liter ($1) and diesel at 74.62 rupees a liter, up 7% and 10% respectively in rupee terms from the beginning of the year. In contrast, Brent crude prices, despite their modest recovery since May, languish around $40 a barrel, or nearly 40% below levels at the start of the year. 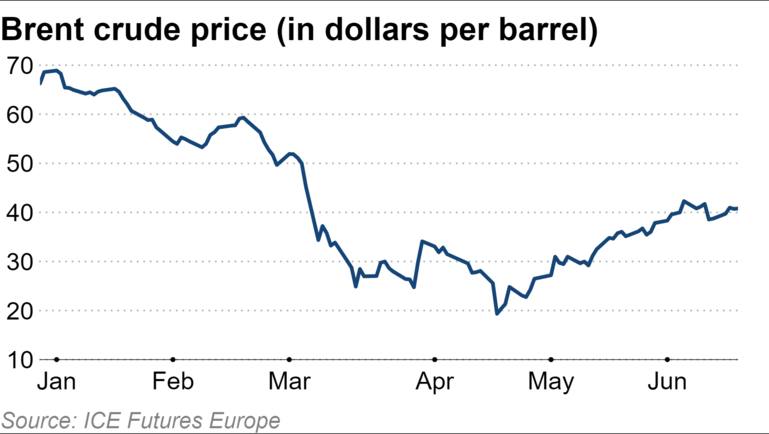 Following the latest hike, taxes on petrol and diesel in India account for around 69% of the retail price, the highest in the world. They put the country's 1.4 billion people, two-thirds of whom live in poverty, in the same league as consumers in developed economies like the U.K., France and Germany, where taxes make up more than 60% of the retail fuel price.

While higher petrol prices may not break the backs of individuals who can afford cars and two-wheelers, diesel prices affect all classes of people by filtering into the cost of mass public transportation as well as prices of all goods that move by truck.

Prices in China, Asia's biggest consumer, are lower because Beijing maintains a degree of control over pump price adjustments. Petrol currently retails around 5.91 yuan a liter ($0.83) and diesel around 5.11 yuan a liter. However, consumers there did not reap the advantage of the crude price fall because the government does not let pump prices drop in tandem with crude, once the latter slips below $40 a barrel, to protect domestic refiners.

Indonesia, which has Asia's biggest government subsidies on some fuels and among the lowest prices, presents yet another picture. The government supervises price adjustments of unsubsidized petrol and diesel, though in theory they are linked to international markets. The rates have not moved over the past five months because there was not much of a margin to drop them in the first place. But lower input costs in the form of cheaper crude should shore up profit at national oil company Pertamina.

Some countries' consumers are benefiting. In April, Malaysia, Thailand and Vietnam had some of Asia's steepest month-on-month pump price declines, in the range of 24%-40%, when global crude prices hit record lows, including U.S. benchmark WTI's spectacular dive into negative territory.

Although most consumers did not benefit from the fall, they are paying for the rise. With crude's steady recovery since early May, retail fuel prices across Asia have been going up. A stark exception is Pakistan, where the government has continued to cut pump prices, although these have prompted private oil companies to hold back supply, causing shortages at the pump. Holding down pump prices regardless of the world market is untenable. During the nationwide lockdown, the Indian Oil team on an average delivers 2.6 million cylinders of cooking gas every day to the citizens at their doorsteps.   © Sipa/AP

Foreign exchange rates also matter. The U.S. dollar has strengthened against most Asian currencies compared with the start of the year, eroding some of the advantage of cheaper oil as countries and companies need to spend more of their currency to pay for crude or fuel imports denominated in the dollar.

Apart from taxes and exchange rates, freight costs incurred in importing crude or refined products, the efficiency of domestic oil refineries, local fuel transportation costs and dealer margins also get baked into prices at the pump.

The formulae for calculating pump prices in free-market economies, once agreed between various agencies, refiners and marketers, are difficult to change without deliberation and good reason. The only flexible component is thus taxes.

The choice for governments between bolstering their coffers and letting consumers under financial stress have the full advantage of cheaper oil is a tough one. Countries typically cut taxes and interest rates to help spur retail spending in a slowdown. New Delhi will have to ensure it makes the additional tax revenues work harder than if the money were in consumers' pockets or it will have a very irate public on its hands.