Indian-made COVID vaccines will save the world Vials of AstraZeneca's Covishield inside a lab at Serum Institute of India in Pune, pictured on Nov. 30: the COVID-19 vaccine is of particular value in developing nations.   © Reuters
CopyCopied

Sreeram Chaulia is a professor and dean at the Jindal School of International Affairs in Sonipat, India. He is author of "Trumped: Emerging Powers in a Post-American World."

With vaccines from America's Pfizer and China's state-owned pharma group Sinopharm receiving their first overseas authorizations, the frantic race to produce and distribute the most-sought-after medicine in recent memory is on.

According to the mainstream narrative, vaccines produced by private-sector giants in the West are seen as competing against state-promoted vaccines from China and Russia to flood the world market. The contest looks like a pharmaceutical version of good versus evil that is being waged in the so-called new Cold War. But coming through the middle of this Manichaean pack is the runner that everyone has overlooked -- India.

It has the largest vaccine manufacturing capacity in the world, accounting for 60% of global production, and boasts of cities like Hyderabad which has the medical infrastructure to meet one-third of global vaccine demand, earning it the title of "vaccine capital of the world." The Serum Institute of India, or SII, located in another Indian city, Pune, already churns out more than 1.5 billion doses per annum. 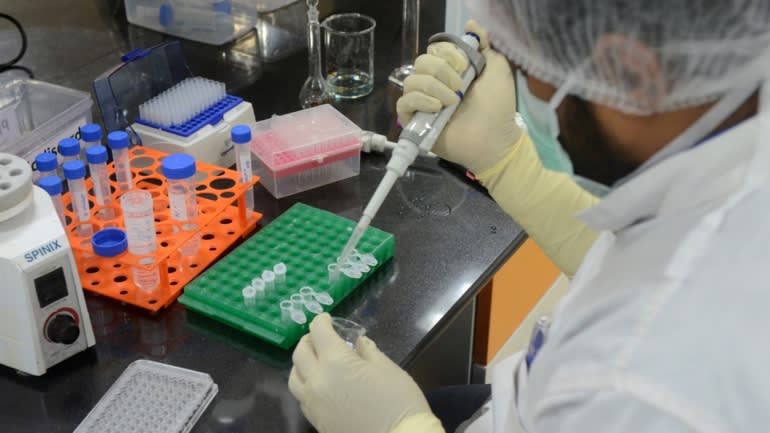 A research scientist works inside a laboratory of the SII in Pune: the world's largest maker of vaccines churns out more than 1.5 billion doses per annum.   © Reuters

Apart from the lower cost advantage that accrues from economies of scale, Indian vaccine makers have established reputations when it comes to safety and efficacy. The World Health Organization has approved only five Chinese vaccines for export compared to 47 vaccines from India, testifying to the latter's rigorous quality controls. India's track record of successful mass immunization programs for hundreds of millions of people at home against other diseases is also reassuring.

Confident of its reliable inventory and positive image, India's Prime Minister Narendra Modi has vowed "to help all humanity" in fighting the coronavirus pandemic. New Delhi has preordered 1.6 billion doses of vaccines from Britain's AstraZeneca, U.S.-based Novavax and the Gamaleya Research Institute in Moscow, all to be manufactured in India, and is also betting on locally researched vaccines from Indian companies like Bharat Biotech and Biological E.

The Indian government aims to have enough vaccines for inoculating the minimum required 60% of its 1.3 billion strong domestic population as well as producing enough to supply other needy nations around the world. As soon as the regulatory approvals are in place, Indian vaccines and India-made foreign vaccines are expected to move on a transcontinental scale to assist those least developed countries in particular that could not pre-order doses and are reliant on charity from multilateral initiatives such as the WHO-led Covax Facility.

India has already pledged a $15 million donation to Covax, but given the keen sense of nationalistic competition among vaccine manufacturing countries to be acknowledged as leaders against a deadly pandemic, New Delhi has a blueprint to also bilaterally export its vaccines to a vast number of countries in Asia, Africa, and Latin America.

The AstraZeneca vaccine, of which the SII will make 200 million doses by the end of January, is of particular value in developing nations because it is affordable and climatically suitable for the tropics. SII has reserved "50% of whatever quantity we manufacture to low-and middle-income countries" and has capped the per-unit price of a dose at $3.

The Prime Minister of Bhutan, India's tiny northern neighbor, Lotay Tshering has said in this context that "the lead India is taking in developing vaccines is a source of hope for all of us." India understands that the rollout of its COVID vaccines in strategically important countries holds the key to its soft power in the pandemic era. Bhutan's Prime Minister Lotay Tshering, pictured in September 2019: he has said that "the lead India is taking in developing vaccines is a source of hope for all of us."   © Reuters

India's top diplomat Harsh Vardhan Shringla has announced that the "first priority will be for our closest neighbors, our friends" and assured Nepal, Bangladesh, and Myanmar of coverage under India's vaccine umbrella. For Africa, where SII's meningitis vaccine was priced at less than 50 cents and which the WHO credited for saving "hundreds of thousands of lives," India-made COVID vaccines could be public health game-changers.

China is aggressively marketing its COVID vaccines globally, but the political conditionalities it has imposed for supplying doses have irritated Southeast Asian countries such as Thailand and the Philippines. Chinese developed vaccines also lack the quality credentials of those produced in India. China's inoculation of more than 1 million of its own citizens with Sinopharm doses without even completing full trials has raised eyebrows about safety and efficacy, mirroring the concerns about Russia's Sputnik V.

In the race to be the savior of the planet, India's extensive partnerships with scientifically trusted Western companies give it a leg up over China and Russia, whose vaccines appear politicized and rushed to prove one-upmanship.

China's President Xi Jinping has projected Chinese-made COVID vaccines as global public goods and ultimate solutions. But as the pandemic emanated from China, and given the sharp decline in China's image in international public opinion, it is doubtful if Beijing's vaccine charm offensive will cut ice.

Much has been said about the ill-effects of vaccine nationalism, wherein countries care only for their own citizens' health and abandon the needs of the rest of the world. But as the "liquid gold" in small vials begins circulating, we will see a different sort of competition in the name of vaccine internationalism. By adopting the right strategy, if India lives up to its potential, it is poised to go the furthest in this race.