Jun Arima is Senior Policy Fellow on Energy and Environment at ERIA, the Economic Research Institute for ASEAN and East Asia.

Even though critics say building nuclear power plants is an expensive and environmentally unfriendly strategy, at least two nations in Southeast Asia are keen on it: both Indonesia and the Philippines have recently proposed reviving plans for nuclear energy.

From now to 2040, the ASEAN region will encounter daunting energy and climate challenges. While ASEAN will increase its total primary energy supply by more than 140% from 2015 to 2040 under current plans, its electricity demand will almost triple during this period, driven by economic and population growth.

To generate this power, the share of fossil fuels will grow from 83% to 88%, including using much more coal. Carbon dioxide emissions will almost quadruple along with all the harmful environmental effects.

Nuclear, together with large-scale hydroelectric power generated by water, is the only technology which can supply a vast amount of stable and carbon dioxide-free power, which is why Indonesia's and the Philippines' plans make good sense. It is of utmost importance that ASEAN countries work toward securing a sustainable energy future by improving energy efficiency and expanding the share of non-fossil energy.

Current plans, based on fossil fuels, will inevitably increase ASEAN's dependence on imported coal, oil and gas, which will make it further vulnerable to external shocks. In addition, increasing carbon dioxide emissions is contradictory to the pathway to decarbonization envisaged under the Paris Agreement on Climate Change signed in 2016.

Nor can renewables entirely fill the gap. The rapidly declining costs of variable renewable energy, or VRE, in the form of solar and wind, will make it more competitive with conventional power sources, and almost all ASEAN countries are promoting renewable energy. Solar and wind could offer exciting opportunities for electrification in rural areas not yet connected to the grid system.

However, VRE has its own unique challenges. Due to the intermittent generation of solar and wind power thanks to natural conditions, installing VRE in energy systems calls for costly balancing measures like adjusting existing fossil power plants, expanding grid systems and investing in batteries. Those costs will increase with the higher share of VRE and need to be considered on top of the cost of generation.

Of course, nuclear has its own challenges, not least safety, waste and cost, all of which the public must be reassured about. Globally, concerns about its safety have risen since the Fukushima nuclear power accident in 2011 when a tsunami overwhelmed the power plant there and caused a meltdown. 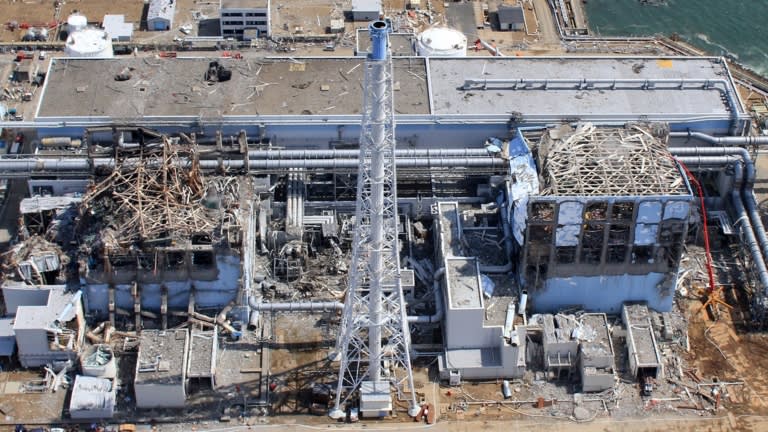 The Fukushima Daiichi Nuclear Power Station after an explosion following the earthquake and tsunami, pictured on Mar. 24, 2011: concerns about safety have risen since the accident.   © Air Photo Service/Reuters

The establishment of robust nuclear safety standards and their implementation by an independent, transparent and capable nuclear regulatory authority are the prerequisite here. These require strong human and institutional capacity.

Public acceptance is the biggest challenge. Trust between the operator and the local communities hosting the nuclear power plants is crucial. Concerns about nuclear safety and treatment of radioactive waste tend to lower public acceptance. This would make the approval process uncertain, leading to costlier and riskier investment.

Governments need to be responsible for a predictable and transparent decision-making process and for the steady progress of operation, actively inviting stakeholders into the schemes. Raising public literacy on energy security, risk and global warming issues is also crucial.

And while nuclear power is cheaper to run, the initial costs for building nuclear power plants are very high. They require long approval and commissioning times too.

Nuclear technologies are evolving. To address some of these challenges, modular reactors have advantages such as a relatively small size, reduced capital investment, the ability to be sited in locations not possible for larger nuclear plants, provisions for incremental power additions and distinct safeguards, security and nonproliferation advantages.

However, it is not appropriate to regard nuclear and renewables as an either-or choice. In fact, nuclear could work in synergy with renewable energy sources by adjusting its operation in response to VRE's intermittent production.

There are many challenges with the nuclear power option and even though Indonesia and the Philippines are considering nuclear power as an arrow in their quiver, they still have a long way to go.