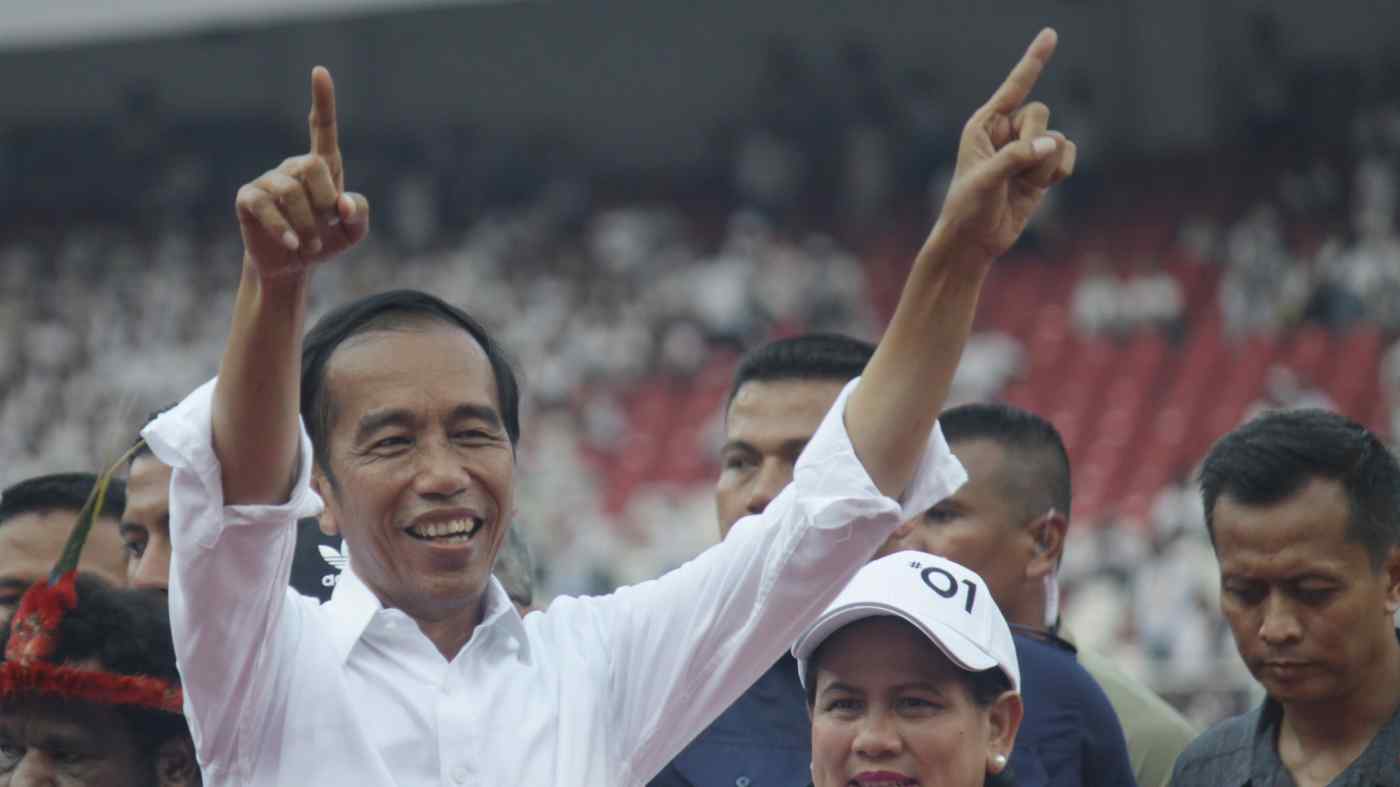 Joko Widodo greats his supporters during the campaign ahead the presidential election in Jakarta in April 2019: Jokowi failed to curb the economic nationalism run amok in Jakarta politics.   © NurPhoto/Getty Images
CopyCopied

Indonesia is gunning for a V-shaped recovery, but that will not happen. Not until President Joko Widodo gets serious about taming the two C threats to Southeast Asia's biggest economy: COVID-19 and the crisis feedback loop Jakarta has been stuck in for more than two decades.

Indonesia's 270 million people do not need a Tokyo-based writer to tell them what they already know. I will let the Jakarta Post do the talking with this May 6 headline: "Indonesia close to following India's COVID-19 surge."

Currently, India is getting the most dramatic front-page treatment around the globe, and rightfully so. But Jokowi, as Widodo is known, is courting his own coronavirus debacle at the very worst possible moment.

Granted, the 0.74% year-on-year drop in real gross domestic product in the first quarter is not the end of the world, certainly when compared with the GDP wreckage to come in India. But the continued slide in household consumption and waning business confidence suggests Jakarta's emergency funds disbursal program is not getting broad traction, says Gareth Leather at Capital Economics. "The situation remains poor," he says. It is vital to recognize, though, how much of Indonesia's underlying frailty has its roots in preexisting conditions that Jokowi has been slow to address since 2014. And how the latest wave of COVID-19 is the biggest test yet of Jokowi's legacy as a hands-on, get-things-done leader.

Jokowi rose to national power after a two-year stint as Jakarta mayor. He became known as "Mr. Fix It" for literally rolling up his sleeves to tackle problems, riding his bicycle to assess firsthand a power outage, a water supply shortage, a bus accident.

To many, this made Jokowi an ideal successor to Susilo Bambang Yudhoyono. A former general, Yudhoyono seemed an unlikely reformer when he set out to remake an economy reeling from the late 1990s Asian crisis. From 2004 to 2014, Yudhoyono cleaned up the national balance sheet, attacked corruption, improved infrastructure to win back investment-grade status.

Along with his reputation for competence, Jokowi boasted another attribute: the first Indonesian president without direct ties to dynastic families, the military or wealthy vested interests. Mr. Fix It was also viewed as "Mr. Clean."

The Jokowi era has had its own reform wins. He accelerated efforts to upgrade the roads, bridges, ports and power grids to increase economic cohesion among the archipelago's 17,000 islands. He put more government services online, cutting out myriad rent-seeking middlemen. He is tackling Jakarta's traffic epidemic, which squanders an estimated $7 billion of GDP each year.

Since winning a second five-year term in 2019, though, Jokowi failed to curb the economic nationalism run amok in Jakarta politics. He seems to believe his own press, forgetting that becoming a top-seven economy by 2030 requires aggressive retooling today to increase innovation and productivity.

Indonesia's future could be incredibly bright, so long as leaders today do the work of engineering it. It is easy to miss, for example, that Indonesia's young, tech-savvy population is churning out unicorn startups faster than Japan and South Korea. We need more of this disruption and wealth creation.

The pandemic has since returned Indonesia bulls to earth. There is still every reason to think Jokowi can get a handle on surging infection rates -- and limit the damage. But his leadership as cases rise has been less than hands-on.

Lockdowns are important. But as much as they are about halting transmission, they are a timeout for the government to play catchup -- and perhaps to get ahead on testing, contact tracing, vaccinations and strengthening social safety nets.

There are few clear indications of urgency equal to the challenge emanating from Jokowi's government. This throws serious cold water on Economy Minister Hartarto V-shaped-recovery fantasy. His talk of GDP surging at a pace between 6.9%-7.8% later this year is, frankly, just that.

Spin will not revive business confidence or retail sales as infection rates remain elevated. Only clear and credible steps to curb the virus will reinvigorate household spending, which accounts for roughly 60% of the economy. Bold retooling on a Yudhoyono-like level is vital to keeping pace in a fast-changing region.

That is the trouble with preexisting conditions: denying them is no longer possible when a new crisis arrives to expose the damage from earlier ones. Exhibit A: a national balance sheet Jokowi should have done more to strengthen.

"Indonesia's government revenue, as a share of GDP, is substantially lower than most other emerging countries, including others in the region," says International Monetary Fund economist Minsuk Kim. "Indonesia has a pressing need to increase government spending on development to unlock its considerable growth potential."

Those higher revenues would finance bigger investments in education, health, infrastructure, environmental sustainability and more inclusive growth. The best time to make these upgrades was seven years ago. Second best time? Now. The COVID reckoning would be a terrible crisis for a hands-on leader to waste.