As well as the health and economic consequences of the COVID-19 outbreak, it has also given rise to xenophobic sentiments toward China and people of Chinese descent around the world.

This has been particularly noticeable in Indonesia, which has the highest number of confirmed coronavirus cases in Southeast Asia -- and 3 million ethnically Chinese citizens, or 1.2% of its population.

Politicians, the media and troublemakers on social media have all been spreading this xenophobia, and it is starting to have real-world consequences. Tech companies and Indonesia's governments need to crack down on this now, before rhetoric becomes deadly action.

Following U.S. President Donald Trump's phrase, many Indonesians on social media use the term "Chinese virus" to refer to COVID-19 and some have been calling for a fatwa, or religious decree, to bar Chinese-Indonesians and Chinese nationals from entering Indonesia.

Some Indonesians have turned these slogans into action. In one incident earlier this year, several hundred residents of the Indonesian city of Bukit Tinggi, West Sumatra, marched to a hotel where 170 Chinese tourists were staying, calling on them to leave. Local authorities decided to send the visitors back to China later in the day.

The media are complicit. In late January, Kompas TV broadcast a segment on a morning talk show titled "Is a biological weapon behind the coronavirus?" in which the host tried to drive the panelists, one of them was the former head of Indonesia's state intelligence body, to admit that COVID-19 was a Chinese biological weapon.

Indonesia has a long history of prejudice against its ethnic Chinese population. Their success in business and their historical links to communism make them vulnerable. Most Indonesians of Chinese heritage are Christian, Buddhist or Confucian; less than 5% are Muslim, the country's dominant religion.

In the mid-1960s, hundreds of thousands of suspected communists -- some of them of Chinese descent -- were killed after the military alleged they had instigated an attempted coup. Ethnic Chinese were also the main victims of the 1998 riots, where almost 100 women were raped and 1,000 people murdered; they were scapegoated for the country's economic downturn during the Asian Financial Crisis because of their involvement in the economy.

To this day, anti-Chinese sentiment remains widespread within Indonesian society. This was seen, for example, in the uproar when Basuki Tjahaja Purnama, a Christian of Chinese descent, ran in the 2017 election for governor of Jakarta. 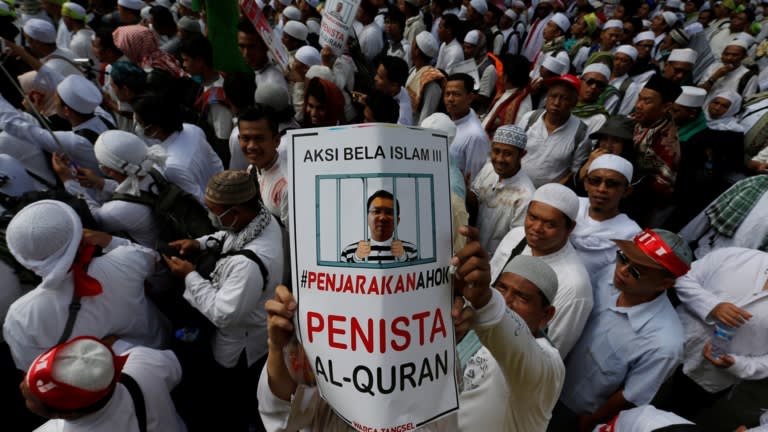 An Indonesian Muslim holds up a poster during a rally calling for the arrest of Basuki Tjahaja Purnama who is accused of insulting the Koran in Jakarta in December 2016.   © Reuters

Recent xenophobic sentiment has strengthened as China's economic activities in the country have grown. There have been widespread accusations that imported Chinese products have been deliberately infected with bacteria; fears that mainland Chinese workers are taking local jobs; and charges that Chinese police were playing a role in domestic politics.

Some even frame COVID-19 as a backlash for China's treatment of Uighur Muslims in Xinjiang, where a million are in "re-education camps," and describe it as God's warning in response to Beijing's policies.

This anti-Chinese sentiment should not be taken lightly. The Jakarta-based Institute for Policy Analysis of Conflict has reported that affiliates of the Islamic State terrorist group in Indonesia have increased their anti-Chinese rhetoric on social media during the pandemic in the hope of using COVID-19 as a pretext to target either those of Chinese descent or Chinese expatriates living in the country.

Indonesian efforts to stop the pandemic should not only be around reducing the number of confirmed cases. They must also eliminate these growing anti-Chinese sentiments.

The most important step is to stop misinformation. While social media accounts like Turn Back Hoax have made such efforts, the authorities and the wider community must also help to spread correct information about how the virus originates and spreads, rather than errors and lies. The Ministry of Communications and Information has in fact attempted to do so by releasing a list of 36 COVID-19 hoaxes debunked.

The inability to make such efforts will not only reinforce long-held anti-Chinese sentiment in Indonesia, but could even lead to terrorist attacks in the country. Then the entire society will have to pay the heavy price.