Doubts over Jokowi's ability to contain virus and restore growth Few nations have stumbled over COVID-19 as ominously as Indonesia.

Southeast Asia's biggest economy fell into recession for the first time in two decades in the July-September quarter. A 3.5% contraction, following a 5.3% drop in the preceding three months, has the business community remembering 1998, when the Asian financial crisis toppled the government and precipitated deadly riots.

The good news is that President Joko Widodo, commonly known as Jokowi, has charge of a country in much better shape than 22 years ago. Post-1998 reforms increased Jakarta's defenses. The bad news: this stumble could set back living standards many years -- and perhaps set the stage for a lost decade to come.

For a leader revered for hands-on solutions to big challenges, Jokowi has taken a surprisingly hands-off approach to the pandemic. That raises doubts about his wherewithal to contain the virus and restore growth.

In the three months to September, household spending, which drives more than half of gross domestic product, fell 4% year-on-year. That followed a 5.5% slide between April and June, demonstrating the magnitude of the problem. The government's impulse is to claim all is well. "The worst is over," stresses Finance Minister Sri Mulyani Indrawati. Now, she says, "we are in the recovery stage."

Yet the reality is far more complicated as second waves of infection slam global economies. The U.S. is zooming toward 11 million COVID-19 cases. Many parts of Europe are reimposing lockdowns sure to sap demand. Japan has slowed to a walking pace. China's recovery is mostly a boon for semiconductors and high-tech sectors Indonesia has yet to build. Mass tourism is paralyzed.

That leaves domestic demand. Yet Jokowi's unsteady coronavirus response has sowed confusion and uncertainty. Indonesia's official caseload seems manageable relative to bigger economies. At 445,000, its infection rate pales in comparison to smaller population states such as Belgium, Poland and Germany. Indonesia's health care safety net, though, is far from ready for prime time. Its creaking economic system has serious preexisting morbidities as the pandemic spreads.

Here, Jokowi must look in the mirror. In his first term, from 2014 to 2019, Jokowi built on the reform process he inherited from Susilo Bambang Yudhoyono. From 2004 to 2014, Yudhoyono strengthened the national balance sheet, attacked corruption and improved infrastructure to regain investment-grade status. 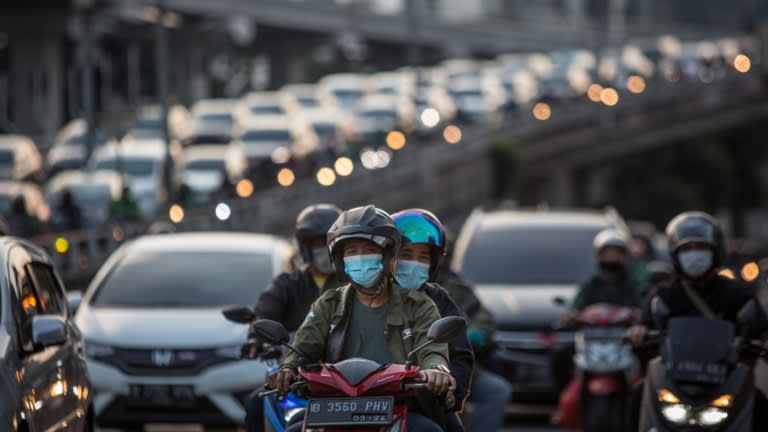 Last year, Jokowi seemed to begin his second term devoid of urgency. He did little to clamp down on the economic nationalism run amok in Jakarta political circles. His biggest policies, meantime, have done more to sow confusion than instill confidence.

A controversial omnibus law Jokowi signed earlier this month is a case in point. Ostensibly, the legislation aims to reduce bureaucracy, which Jokowi claims will create new jobs and boost growth. Thanks to poor messaging, the law may have the opposite effect. Worries that companies and public entities now have more latitude to cut staff is hurting household sentiment.

Other policies are turning off foreign investors. One is having Bank Indonesia buy government bonds directly from the Ministry of Finance, a so-called monetization. Another: altering Bank Indonesia's governance structure to give elected officials greater sway over monetary decisions.

Such stimulus moves only get Indonesia so far. More Bank Indonesia liquidity does nothing to take Jakarta's fight against graft and inefficiency to the next level. It does zero to decrease the size of the state sector or boost productivity.

Greater Bank Indonesia action does zero to realize aspirations to create homegrown tech unicorns or raise Indonesia's ranking on global ease-of-doing-business tables where it currently ranks behind Jamaica. It does zero to invest in education and training. It does zero to strengthen a health care system being strained by COVID-19. It will not spread the benefits of GDP and reduce inequality.

Here is why lost-decade risks must be taken seriously. In the pre-COVID-19 era, Indonesia struggled to avoid the middle-income trap, when per capita income stalls out below $10,000. Today, Indonesia's per capita income is just over $4,100, behind El Salvador and Mongolia. Post-pandemic, Jokowi's team will have to make up for lost time, and fast.

That is much easier said than done. Jokowi's team rarely misses a chance to point out a McKinsey estimate that Indonesia will join the ranks of the Group of Seven nations by 2030. Yet getting there means growing better, not just faster. It means investing as much or more in economic software -- human capital -- as infrastructure hardware.

The world's fourth most populous nation -- 274 million people -- is home to the biggest Muslim population. With a median age of 30, it is vital that Jokowi's government create tens of millions of good-paying jobs. This challenge, in COVID-adjusted terms, warrants a level of urgency that sadly seems absent in Jakarta. If there were ever a time for Jokowi to make good on that hands-on-leader reputation it is now.