It is suffering from flabby state-owned enterprises and coronavirus blow Joko Widodo's unsteady approach to the outbreak is emblematic of the problem.   © Pool/AP
CopyCopied

One is catching the world's attention with splashy initial public offerings. As coronavirus fallout shelves IPOs elsewhere, 27 newcomers have listed on Jakarta's equity market with at least 26 more in the pipeline. The other -- the microeconomy underneath it all -- is stumbling into debt troubles, reminding investors of the cracks beneath the surface.

The odds do not favor IPO fever dominating the rest of 2020.

President Joko Widodo's unsteady approach to the COVID-19 outbreak is emblematic of the problem. Jokowi came to office in 2014 with comparisons to Barack Obama. Like the former U.S. president, Jokowi started out as a community organizer and seemed like a hands-on problem-solver who would get things done. 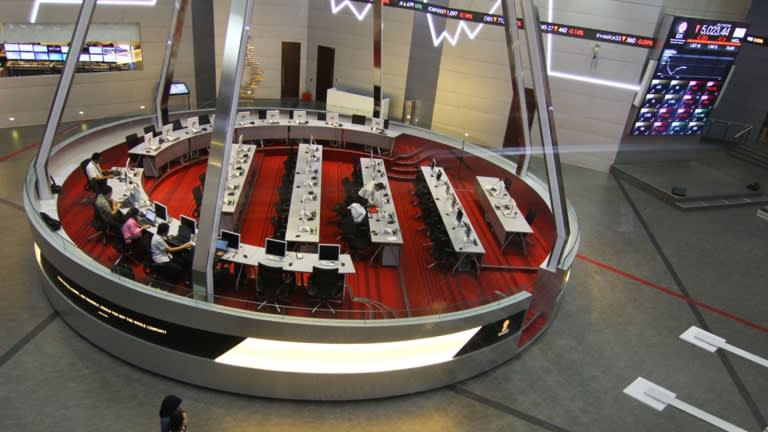 The Indonesia Stock Exchange in Jakarta: the odds do not favor IPO fever dominating the rest of 2020.   © LightRocket/Getty Images

Jokowi's coronavirus playbook, though, has been more Trump-ish. Like U.S. counterpart Donald Trump, he reacted slowly and favored preserving economic growth over strict lockdowns. COVID-19 testing is sporadic at best. He has recommended an unproven herbal remedy, while his health minister trumpeted the power of prayer.

Perhaps it is possible that a developing nation of 270 million with the lowest health spending per capita among major Asian economies has fewer coronavirus cases -- about 16,000 -- than Austria, population 9 million. The smart money goes on undetected infection clusters.

This state of denial extends to economic risks that predate the pandemic. One is a surge in state-owned enterprise debt that received little attention until now. Indonesia's 114 such businesses employ millions and have hundreds of labyrinthine subsidiaries. Since 2014, Jokowi has pledged to attack the corruption and mismanagement that have long plagued the SOE sector.

He has, however, found it near-impossible to shake up an industry pivotal to his $370 billion plan to build better roads, railways, ports and power grids. Improving links between the nation's 17,000 islands is crucial to raising competitiveness and living standards and to succeeding in his plan to relocate the capital from Jakarta to Borneo island.

Six years into Jokowi's presidency, the Organization for Economic Cooperation and Development says the role of SOEs is more dominant than any nation outside China. This predicament makes for quite a juxtaposition with the IPO fever garnering headlines at the Indonesia Stock Exchange.

Southeast Asia's liveliest IPO scene is not producing multibillion-dollar blockbusters. According to a Nikkei Asian Review analysis, proceeds during the first quarter amounted to roughly $200 million -- rather paltry relative to the $2.3 billion which professional services firm EY says companies raised in Thailand during that period, or even Singapore's $500 million.

Yet any IPO at a moment when global markets are quaking is a win -- and a chance to grow the private sector. It is an opportunity to increase Indonesia's modest ratio of market capitalization to gross domestic product.

The underlying economy is becoming a problem though. Early on, Jokowi scored some reform wins. They include moves to improve infrastructure, increase tax collection, cut budget-busting subsidies and curb bureaucracy.

Today, Indonesia ranks 73rd on the World Bank's ease of doing business survey, up from 120th in 2014. It has improved to 85th in Transparency International's corruption perceptions index from 107th in 2014.

Yet Jokowi moved slowly to modernize labor laws. Nor has he boldly tackled laws on land, energy or the judicial system. He slow-walked investment in education and health services, a lack of focus that makes Indonesia more vulnerable than neighbors as the coronavirus outbreak upends Asia.

One failure Jokowi cannot blame on the pandemic is not producing the 7% annual growth he promised for six years now. The 5% rate in 2019 was the slowest since 2015. Now, the world's fourth most populous nation risks a deep recession from what the International Monetary Fund calls the "Great Lockdown." In the best-case scenario, the IMF thinks Indonesia will grow 0.5% in 2020. COVID-19, you could say, found an economy with serious preexisting conditions and is exploiting them ruthlessly. Chronic budget and current-account deficits leave the national balance sheet and the currency vulnerable. The outsized role of the state sector offers Jokowi an unpalatable choice: huge government bailouts or a wave of defaults that puts at risk Jakarta's investment-grade rating.

Symptoms of trouble are intensifying. Last month's default by state-owned real estate developer Perum Perumnas on a $13.5 million note will not be the last from an SOE. Flagship airline Garuda Indonesia, in which Jakarta holds a 60% stake, has $500 million of bonds due in June -- and, reportedly, is trying to restructure its obligations.

The trouble with two divergent economies is that, in the long run, they tend to converge. As the coronavirus exposes Indonesia's weak spots, Jokowi must implement vital reforms on an economy in deteriorating health. That could wreak havoc with Jakarta's IPO schedule.