Investors must push Asia's protein producers to be cleaner and greener

Explosive demand for meat and milk has negative environmental effects

Food companies are profiting from breakneck growth in global protein consumption -- up 40% since 2000, with more than half of this increase driven by Asia. China and India alone are set to consume 360 million tonnes of protein by 2025, up from 171 million tonnes in 2000.

This exploding demand has created blockbuster livestock producers and an industry whose value has increased from $192 billion to nearly $517 billion in the last 30 years.

Alongside this growth, however, has also been an explosion of negative health and environmental impacts associated with the industry.

Asian companies have been poor at dealing with the risks of such growth -- greenhouse gas emissions, deforestation, water scarcity and more -- which is why investors should push them to act, for their own benefit and the world's.

This growth is a consequence of multiple trends, from rising populations to an expanding middle class looking to enjoy the benefits and status of a protein-heavy diet. In China, for example, the government recommends people consume triple the amount of dairy foods they do currently. This is in a country where dairy food consumption has gone from negligible to 30 kilograms per person in just 50 years.

Meeting this exploding demand has required a reorientation to a Western system of livestock and fish production that is concentrated and prioritizes fast-growing animal breeds who process feed efficiently.

The Coller FAIRR Protein Producer Index assesses 60 of the world's leading animal protein producers across nine sustainability categories. Among the 60 companies are 28 Asian meat, fish and dairy producers with a combined market capitalization of $190 billion. These companies represent 26% of the Asian protein market.

Asian companies performed poorly in last year's index and are set for a repeat in the 2019 index, published today. On average, Asian companies scored 17%, demonstrating some of the lowest average scores on greenhouse gas emissions disclosure, deforestation, water scarcity and antibiotics management.

One of the biggest concerns for Asian consumers is food safety, but in our index only 57% of Asian companies demonstrated some level of certification by schemes recognized by the Global Food Safety Initiative, which is a good indication of standards that meet international food safety requirements. This compares poorly with the rest of the index, where 75% of non-Asian companies have some type of GFSI certification.

The threat of antibiotic resistance has been described by the World Health Organization as one of the most urgent global threats to public health, and Asian companies, especially in India and China, feed antibiotics routinely to healthy animals to help them gain weight and survive confined and unhygienic conditions.

Despite some movement on regulation in both countries to curb antibiotics use -- India just banned colistin, an antibiotics of last resort, in livestock production -- it is alarming that more than half of the Asian companies in the index have no discussion on how they use antibiotics.

Furthermore, 82% of Asian companies -- potentially some of the largest soy buyers from Brazil -- have no discussion on deforestation risks. This includes the nine Chinese conglomerates that produce pork.

For investors, an understanding of how Asian companies are managing their environmental, social and governance risks can lead to better stewardship of their investments, given the serious cost of things like deforestation.

Globally, animal agriculture emits nearly 15% of greenhouse gas emissions, according to the UN Food and Agriculture Organization. The sector is the largest user of freshwater resources, the biggest driver of deforestation in critical ecospheres and a leading user of medically-important antibiotics.

Its scale makes it vulnerable to animal pandemics such as African Swine Fever and to the growing impacts of climate change, including droughts, extreme weather events and diseases.

This creates material financial risks for companies, their investors and the global economy. The outbreak of the H7N9 bird flu pandemic in 2013, for example, cost the Chinese economy an estimated $6.5 billion, while ASF knocked 10% off the value of giant pork producer WH Group last year. 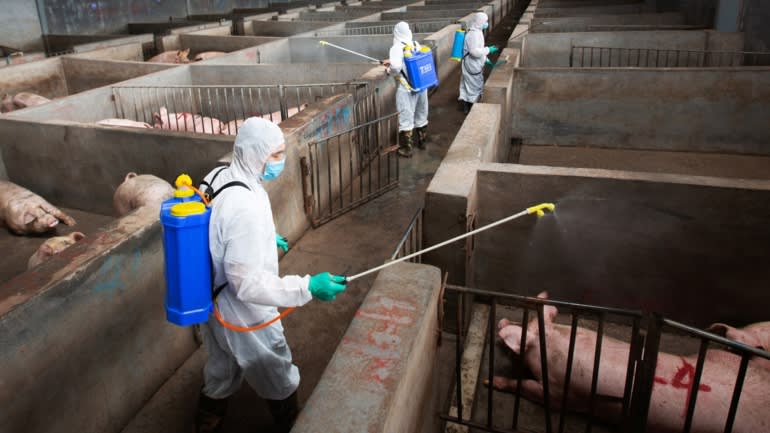 These negative environmental consequences, with all their knock-on effects for humankind, invite the question of whether meat, dairy and fish could one day be produced in a lab at a scale enough to satisfy the world's protein demand.

The spectacular rise of Beyond Meat and Impossible Burger, and the exciting possibilities of cultured meat and dairy, have shown that protein-based foods can replicate the taste, texture and flavor of animal proteins without using the actual animal.

This will have enormous, disruptive consequences for the sector, which is why many animal producers in the U.S. and Brazil have announced investments in building alternative protein businesses. Asian producers should be exploring how these developments affect them and whether there are opportunities in this emerging product category.

Asian food companies are behind the curve in terms of environmental practices. More worryingly, the next decade looks set to be the most disruptive the protein industry has ever seen. Emerging legislation, accelerating food technology and a rise in ethical consumerism are all likely to take a bite out of Asian food companies' profits if they continue to lag behind.

Avoiding that scenario will require a radical and difficult overhaul of supply chains and product portfolios -- an unpalatable prospect for company directors. It is up to investors to help them see that the alternative is even more distasteful.

Aarti Ramachandran is head of research and engagements at FAIRR, a collaborative investor network that raises awareness of the material environmental, social and governance risks and opportunities caused by intensive animal production.