Is there a limit to the Olympic sacrifices we must make, John Coates?

Self-awareness is not an International Olympic Committee hallmark I am not sure what John Coates is smoking these days, but it sure does seem like time to share.

Just the other day this International Olympic Committee blowhard stood by his boss Thomas Bach's insistence that Tokyo make "sacrifices" so he can fly in 80,000-plus athletes, staff and hangers-on from everywhere, with modest health requirements and scant movement controls, during a pandemic that has already killed 3.5 million people worldwide.

Asked if the Games would proceed even if the host city was still under a state of emergency, Coates said "the answer is absolutely yes." Thanks, Coates-san. Just out of curiosity, what is your over/under on human sacrifice? I cannot speak for all of the greater Tokyo area's 37 million sacrificers, but for me, it is a very hard "No" to any more.

How about we sacrifice Coates' gig instead? The No. 2 on the IOC's register of entitled five-star, living-high-on-the-hog pomposities seems plenty expendable. What, with the Japanese public overwhelmingly eager to scrap the bloated Olympic celebration itself, maybe Coates should turn his attention to the next IOC-produced disaster as Beijing Winter Games boycott talk intensifies.

Self-awareness is not an IOC hallmark. It proved even more clueless than usual about Tokyo from the first. The IOC deemed it acceptable to make athletes compete in the extreme heat and humidity of a Tokyo summer so it could reap the most cash possible from television rights to this grotesquerie.

Tokyo staged the 1964 Olympics in October for a reason: to avoid the need for body bags. The response from today's IOC? Sacrifice, please. You would think having the famed Tsukiji fish market -- one of Japan's top tourist draws -- relocated to build an Olympic Village would have been beneficence enough. Or the trees in majestic Yoyogi Park being butchered to make room for Olympic viewing areas that might not even be needed. 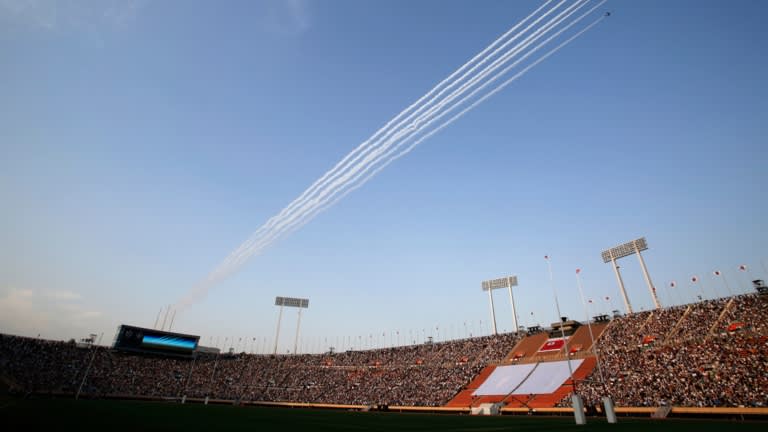 Opening ceremony of the Tokyo Olympic games in 1964: the city staged the Olympics in October for a reason.   © Reuters

How about the fact that visiting athletes might end up getting vaccinated on arrival, while we in Tokyo still wait for our jabs? Is that not sacrifice enough for you IOC fat cats traveling the globe in five-ringed style? Or what about the $2 billion we taxpayers are footing to delay the games by a year? You are welcome, Coates-san. Did you, perchance, think to fly coach to Tokyo this time in solidarity?

Tokyo 2020 will not allow athletes any opportunity for political statements. Which is weird, considering that Australian Coates in 2018 honored fellow countryman Peter Norman's courage back in 1968. There, on the medal stand at the Mexico City Games, Norman raised a fist with two African American sprinters. Maybe Coates forgot.

Adding insult to injury: the IOC is now demanding that athletes sign a waiver ridding it of responsibility if anyone gets sick, like people at some Donald Trump rally. Am I alone in feeling like the Marx Brothers are in charge?

The arrogance is breathtaking. Perhaps Sydneysider Coates spent too many days with his head under the sand at Bondi Beach to be able to smell the ordure. But what excuse has Yoshihide Suga? Japan's elusive prime minister does, presumably, still live in Tokyo.

International news coverage of the Olympics already has a disaster vibe. Foreign news anchors do live shots, almost always with a Tokyo Tower backdrop, as if waiting for the next typhoon, tornado, mudslide or some other calamity.

Perhaps it is this cinematic age, with every other movie having some superhero swooping down from the heavens to save us. And we, the 126 million occupants of Japan, are cast as extras -- 'scuse me, sacrificers -- in this IOC blockbuster.

Coates & Co. may style themselves as Guardians of the Galaxy, when in fact they are more Night of the Living Dead come to Ginza and Gaienmae.

It is enough to get Japanese CEOs, normally a rather reticent lot, to shriek in horror. Case in point: Masayoshi Son, Japan's richest man, expressing bewilderment that the IOC gang thinks unvaccinated Japan is a safe feeding ground.

"Currently more than 80% of people want the Olympics to be postponed or canceled," Son tweeted. "Who and on what authority is it being forced through?"

Son went on to speak for many of us sacrificial lambs: "There's talk about a huge penalty [if the games are canceled]. But if 100,000 people from 200 countries descend on vaccine-laggard Japan and the mutant variant spreads, lives could be lost, subsidies could result if a state of emergency is called, and gross domestic product could fall. If we consider what the public has to endure, I think we could have a lot more to lose."

In other words, the sacrifice to make is Tokyo 2020.

If the IOC and Tokyo go ahead, they will have some serious explaining to do, historically speaking. Before long, Harvard MBA students may be taking "Crisis Management 101: The Tokyo Olympics Superspreader Disaster" classes. McKinsey & Co. might do "How the 'Olympic Spirit' Created Actual Spirits" reports. The walking dead might produce a Tokyo Stagger spinoff rich with medal-wearing fiends. Good times.

The IOC leans on contractual mumbo jumbo. Some pundits wax on about how the Olympics is not a democracy and only the IOC can cancel. The Japanese just have to take it.

I have a better idea: You IOC folks hand back a good chunk of the $15.4 billion Tokyo admits to spending -- the real figure is likely closer to double that -- and pivot to Beijing already. Your authoritarian tendencies might land better there. Because in Japan, consider yourselves less popular than week-old sushi.