Japan remains the global hotbed for activist investors behind the U.S. The trading floor of at the Tokyo Stock Exchange: the share of underperforming stocks is much higher in Japan than anywhere else in the world. (Photo by Kento Awashima)
CopyCopied

While most global stock markets including Japan's Nikkei Stock Average have almost fully recovered their COVID lows, the crisis has left certain sectors and companies looking rather battered and bruised.

What is most interesting about Japan is that the share of underperforming stocks is much higher here than anywhere else in the world.

This will likely lead to significant restructuring driven by foreign and domestic capital, from activist and strategic investors alike. And over the next two years, I expect to see a major consolidation in the Japanese industrial sector.

Already in 2019, the number of hostile takeover attempts had risen to five from the one or two Japan usually sees each year. Expect that figure to keep rising, with underperforming stocks being the primary targets.

Just one company out of the Nikkei Stock Average, M3, is up more than 60% -- compared to four out of 90 German DAX and MDAX companies, and nine U.S. S&P 500 companies. Interestingly, Germany -- with a similar industrial structure built around a strong manufacturing sector and which is also seen as a laggard when it comes to digitalization -- clearly has more stock winners and less losers than Japan.

Let us have a closer look at the most affected sectors. Only three out of Japan 33 Topix sectors are up by more than 5%: precision instruments, info and communication -- both up by 6% -- and other products, which is up by 11%.

By contrast, seven indexes are down by more by than 20% year-to-date, meaning they have barely moved from their COVID lows: from mining, which is down 48%, through to iron and steel, air transportation, real estate, textile and apparel, oil and coal products, to banks, which is down 21%. 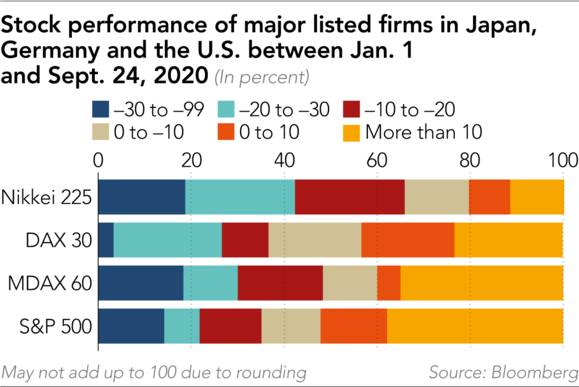 The message is clear: international investors do not appear to fancy Japan Inc.'s prospects of prevailing in a post-COVID world. The pandemic has exposed specific sector and company weaknesses, many of which have been there for years.

Other structural weaknesses include a declining population and shrinking domestic market with clearly too many domestic players in a number of sectors such as steel, heavy industry, automotive, or office equipment. Companies fitting these descriptions have to watch out.

Back in April and May, many activists increased their positions on the back of substantially more attractive valuations than before COVID-19, globally as well as in Japan. These opportunities are now more rarefied. But companies in the sectors mentioned above, which have not recovered, continue to be at risk from activist forays.

It is therefore not a surprise that, according to Activist Insight data, Japan remains the global hotbed for activist investors behind the U.S. By the end of August 2020, 57 companies were subject to activist demands, a figure likely to increase to a full-year record.

At the same time, the need for consolidation in these battered sectors will lead to a surge of friendly and hostile takeover bids by various strategic players. And there is a strong link between both kinds of raiders. Maeda Corp.'s successful hostile bid for Maeda Road Construction in March, with activist Oasis involved in the background, provides a blueprint.

Merger-related consolidation will likely be driven more by Japanese companies rather than foreign players. Publicly listed companies in Japan hold an all-time record of more than $6 trillion in cash. These cash positions provide would-be Japanese buyers with a powerful ready-to-use tool for friendly, as well as hostile, takeover bids.

Japan Inc. is up for far-reaching restructuring and industrial alignment. Japanese companies will be the main drivers, but with heavy involvement of foreign activists who speak up primarily -- though not exclusively -- for foreign institutional investors.

This combination of Japanese and Western capital at play will shape the structural reform of the Japanese economy for years to come and will hopefully contribute to the eventual raising of Japanese companies' global competitiveness.