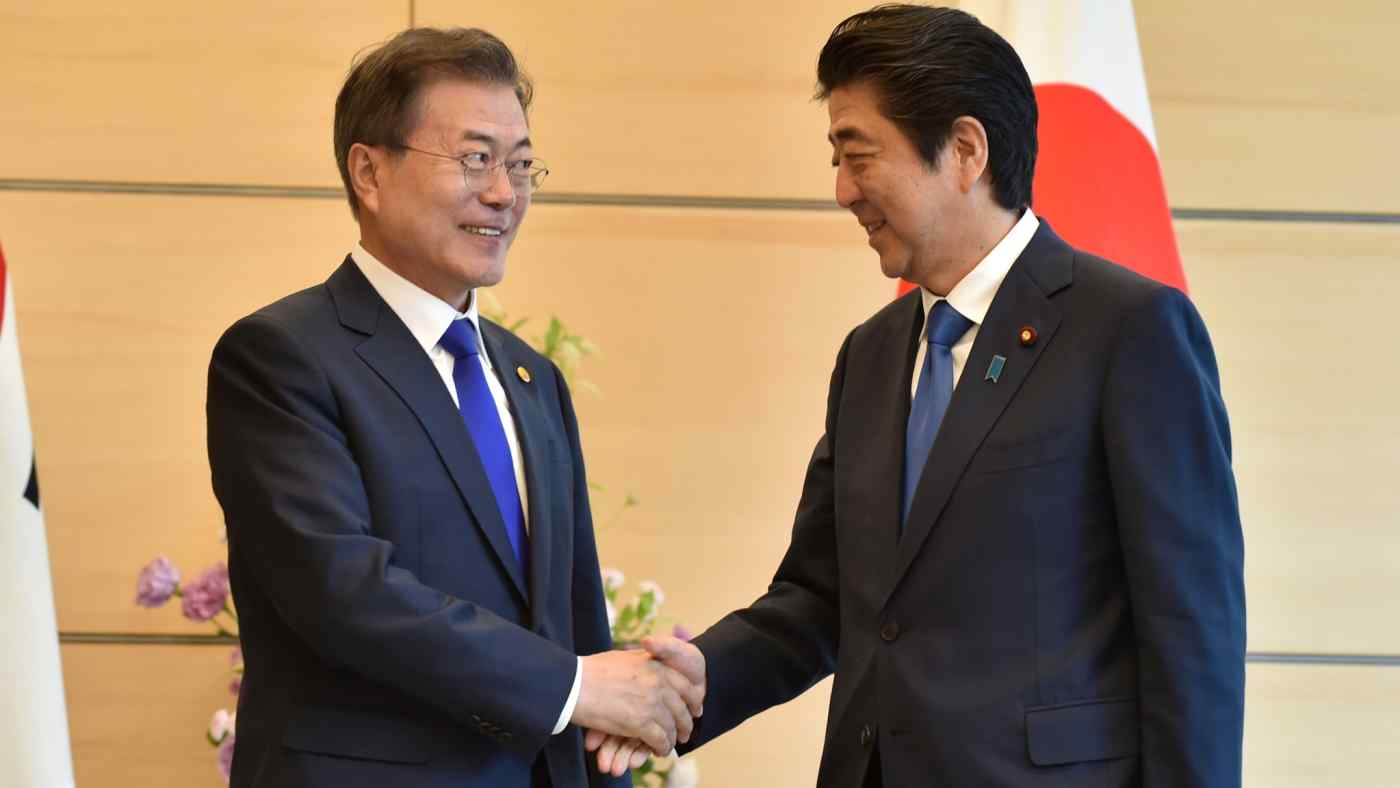 Mistrust between Japan and South Korea will not go away soon.   © Reuters
CopyCopied

Growing tensions between Japan and South Korea are poisoning relations between two countries that should be partners in a world of rising political risks.

Their disputes are starting to threaten the cornerstone of security in Northeast Asia -- the U.S.-led trilateral system on which both Seoul and Tokyo rely.

Just when Washington needs stronger cooperation between its partners in response to the rise of China and North Korea's nuclear program, it is confronted by bilateral bickering.

Both sides must focus on today's priorities. They should defuse arguments that mostly concern historic differences that are painful but cannot be allowed to undermine mutual cooperation at this critical time.

Tokyo has denounced the rulings, saying they undermine the legal basis of postwar bilateral relations. It argues that legal claims involving Korean wartime labor were settled under the 1965 treaty that established diplomatic relations.

But the courts reflect the views of a new generation of South Korean judges wanting to assert the judiciary's independence. They are challenging the legal norm known as the unitary executive theory, which recognizes that the president has supreme authority in foreign policy including making treaties. The 1965 treaty was concluded by the country's then-authoritarian leader, Park Chung-hee, on his sole authority.

The recent wartime labor rulings are popular among South Koreans. That makes it more difficult for President Moon Jae-in to solve the problem diplomatically, such as agreeing to bilateral talks about the court actions that Tokyo says are required under the 1965 agreement.

If the issue is not resolved bilaterally, and Japan sends the case to the International Court of Justice, it could do irreparable harm. This outcome is increasingly likely since politicians in both countries are playing on nationalist sentiment to score political points with voters.

Moon played the populist card in recently dissolving the Reconciliation and Healing Foundation, a Japanese government-funded organization created to support South Korean victims of what Seoul sees as Japan's wartime sexual slavery. The deal was put together under the previous conservative South Korean administration of President Park Geun-hye, the daughter of Park Chung-hee.

The Japanese government of Prime Minister Shinzo Abe believes that the diplomatic ground will be unstable for as long as Moon is in power. But Abe may not be as assiduous as he could be in reducing tensions because they are helpful for him as he purses his own nationalistic agenda, with proposals for revising Japan's pacifist constitution.

Previously, elder statesmen in both countries worked to keep relations steady when misunderstandings arose. This will not be possible in future unless more bilateral exchange programs are developed and the two peoples are brought closer together.

In a sign of how physically dangerous the tensions can be, Japan accused a South Korean naval destroyer of directing its fire-control radar at a Japanese P-1 patrol aircraft in December in what it described as a provocative act. Tokyo then canceled working-level defense talks with Seoul over the issue. This dispute would have been easily solved if it had occurred when bilateral relations were cordial. Japan accuses a South Korean naval destroyer of directing its fire-control radar at a Japanese P-1 patrol aircraft. (From the Japanese Ministry of Defense homepage)

The tensions reflect growing economic competition, particularly when it comes to trade and technology. South Korea last year joined the so-called "30-50" club, meaning it has achieved a $30,000 per capita average income and a population of at least 50 million. That puts it among only seven highly-advanced countries in the world. Japan is the only other Asian member.

Japan and South Korea are similar in that they are democracies with market economies. But South Korea's 2018 Defense Military White Paper deleted a phrase from the 2016 White Paper that stated that the two countries share these common values. The paper also gave higher priority to security cooperation with China than Japan.

No solution to the impasse is in sight. The U.S. has previously mediated between Japan and South Korea. But the "America First" policy of U.S. President Donald Trump gives little priority to allies.

Moreover, under Trump, the U.S. is no longer regarded as an honest broker in the region. Instead it is seen as focused on hegemonic competition with China. This troubles South Korea, which still strongly depends on the U.S. security guarantee, but wants better ties with China, its near-neighbour and huge economic partner.

The current stalemate in talks on a defense cost-sharing agreement with the U.S. has come as a shock to South Korea, with Washington demanding a considerable increase in Seoul's funding for the stationing of U.S. troops in the country.

Moon's engagement policy toward North Korea is another source of tensions between Japan and South Korea. Moon has advocated the early signing of a declaration to end the Korean War in cooperation with China and North Korea. This is despite the fact that the complete and verifiable dismantlement of North Korea's nuclear weapons program has not yet been achieved.

Japan is suspicious of what it perceives as Moon's pro-Chinese and pro-North Korean policies. It is rightly convinced U.S.-Japanese-South Korean trilateral cooperation is essential in solving the North Korean nuclear issue.

Mistrust between Japan and South Korea will not go away soon. But leaders on both sides must build confidence by concentrating on the present and the future. Japanese financing will be essential to help restructure a reunified Korea. Japan needs South Korea as a security partner to check China's quest for hegemony in the region. Japan and South Korea need to work together to cope with the revisionist policies of North Korea, China and Russia, all authoritarian countries, wanting to overturn the postwar international order in Northeast Asia. Japan and South Korea should expand "democratic peace" in the region.

As Henry Kissinger once said, diplomatic negotiations are not the pursuit of "absolute satisfaction," but "balanced dissatisfaction." Diplomacy based on populism is designed to exploit public sentiments for domestic political purposes. Leadership means resisting such temptations. Japan and Korea should heed Kissinger's advice.

Kim Youngho is professor of political science and foreign affairs at Sungshin Women's University in Seoul and holds a Ph.D. from the University of Virginia.