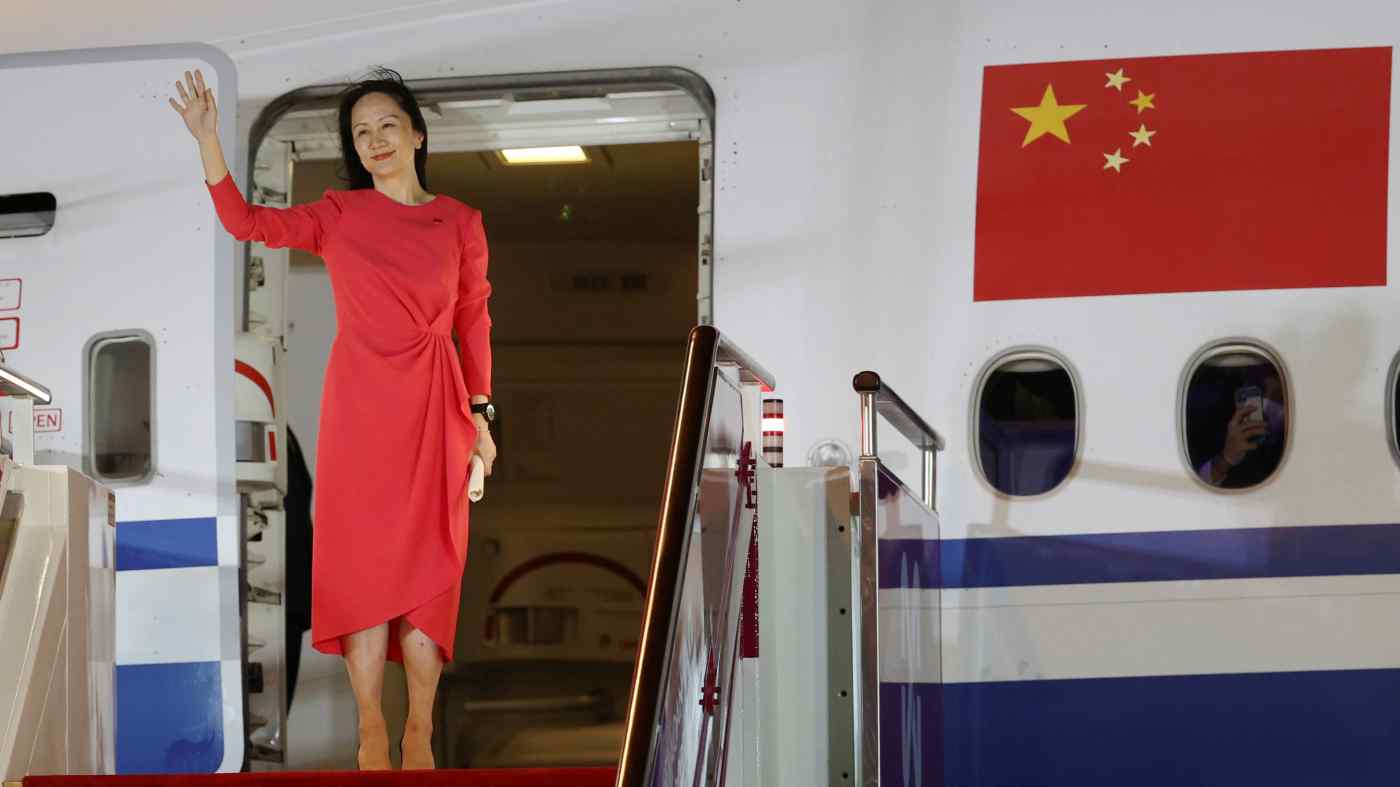 Meng Wanzhou waves as she steps out of a plane at Shenzhen Baoan International Airport on Sept. 25: Meng's explicit exultations on Xi Jinping show that the distinction between the state and corporate China is becoming more nebulous.   © Xinhua/Reuters
CopyCopied

Stephen Nagy is a senior associate professor at the International Christian University in Tokyo. He is a visiting fellow at the Japan Institute for International Affairs.

The long-awaited homecoming of Canadians Michael Kovrig and Michael Spavor from China has been celebrated by Canadians and non-Canadians alike.

It followed the release of Huawei Technologies executive Meng Wanzhou after she signed an agreement with the U.S. Justice Department admitting wrongdoing in exchange for being allowed to go home. Her highly choreographed return to China could not have been more of a contrast to Korvig and Spavor.

Wearing the colors of a true patriot of socialism with Chinese characteristics, Meng spoke effusively about her return to the motherland and how the strength of China, the party and General Secretary Xi Jinping had paved the way for her return.

The absence of information about her signed admission of wrongdoing in the fraud case and the release of the two Canadians has allowed the Chinese Communist Party to reinforce the deeply ingrained narrative of national humiliation at the hands of a Western alliance led by a U.S. determined to halt China's re-emergence on the global stage.

Still, China's hostage diplomacy has not been an unqualified success, with the country's unfavorability ratings in advanced countries at record lows, according to a June 30 Pew Research Center survey. Paradoxically, trade relations have continued to deepen with Canada, Australia, Japan and the U.S. despite Beijing's tactics.

So, what have we learned from this saga?

The big takeaway for Beijing is that hostage diplomacy can achieve its national interests to a limited degree with friends and allies of the U.S., with minimal economic costs.

However, it has also revealed that hostage diplomacy and other forms of coercion can act as a catalyst for middle powers to work together and become resilient and proactive with regard to great powers.

Working with like-minded states, Canada forged a coalition that consistently raised the issue of hostage diplomacy when they met their Chinese counterparts. This imparted reputational costs on China and reaffirmed concerns about the CCP's might-is-right approach to foreign and domestic affairs.

Ottawa also crafted the widely supported Declaration Against Arbitrary Detention in State-to-State Relations, which will be the basis as to how advanced states protect themselves against further cases of hostage diplomacy.

By reinvigorating middle-power cooperation, China has inadvertently compelled countries such as Canada, Australia, Japan and EU nations to take more proactive steps to protect themselves.

Critically, the Biden administration kept championing Kovrig and Spavor's release, with Indo-Pacific czar Kurt Campbell telling Beijing that there would be no improvement in its relations with Washington if its allies were subject to various forms of coercion.

For Canada and other U.S. allies, the main lesson is that they will need to calibrate their China policy so as not to be used by Beijing in its attempts to fracture the U.S. alliance system in the Indo-Pacific.

There is also the realization that much more needs to be done to add concrete and tangible penalties on China or other states that engage in egregious hostage diplomacy and coercion.

Examples could include coordinated sanctions, travel restrictions on individuals and organizations directly involved in specific cases, or a proactive campaign to deliver information to ordinary Chinese citizens through operations that leapfrog the Great Firewall.

Seen in tandem with the CCP's takedown of prominent CEOs, from Alibaba Group Holding's Jack Ma to Dalian Wanda Group's Wang Jianlin, Meng's explicit exultations on Xi show that the distinction between the state and corporate China is becoming more nebulous, especially with companies of high interest to the party, such as Huawei.

This dubious relationship highlights the need for businesses from free and open states investing in China -- and the investment by Chinese companies in their respective countries -- to create bulwarks against influence campaigns coordinated by Beijing.

Canada and other middle powers will need to be increasingly vigilant in their engagement with Beijing to ensure that while they continue to benefit from China's growth, they protect themselves from overexposure to China's might-is-right approach.

Japan offers an important example of how to engage with China from a position of comprehensive strength, with Tokyo maintaining its alliance with Washington as the cornerstone of its security and supporting new initiatives like AUKUS and the Quad.

Leaders of the participating nations gather for a group photo at the Regional Comprehensive Economic Partnership Summit in Singapore in November 2018: Japan is investing in multilateralism.   © Reuters

Japan's approach is both inclusive and exclusive, understanding that the best way to deal with China from a position of strength is to embed Japan into a series of multilateral frameworks that shape the rules of a free and open Indo-Pacific, in addition to shared institutional and national interests.

Through creating a critical economic, institutional and diplomatic mass, Japan is better positioned and more resilient when dealing with Chinese coercion.

Though it is not a panacea when it comes to mitigating the challenges and seizing the opportunities offered by an increasingly assertive China, Canada and other middle powers should study Japan's approach to China to help them withstand hostage diplomacy and other forms of coercion.