Japan is well-prepared for teleworking with modern home designs

Clever use of small spaces and livable neighborhoods combine to help A man works as his son whose school closed down plays at their house in Chiba Prefcture, pictured on Mar. 4: for many people this is not an easy situation.   © Reuters
CopyCopied

When I heard the news that major Japanese corporations were asking their employees to work from home while their children were simultaneously out of school for weeks, I imagined working mothers I know sitting at their cluttered kitchen tables under fluorescent lights, tapping away at their laptops, the television blaring the children's anime shows a few feet away and the kids themselves constantly interrupting for food and attention.

I could picture husbands plopped cross-legged on the bed in the next room fielding phone calls, using their briefcases as makeshift laptop stands, while outside the window cherry blossoms beckon. Every few hours one or the other would escape to the local Starbucks, now packed with fellow remote-work refugees.

I am sure that for many people this is not an easy situation to negotiate without considerable stress, even more so for parents who must take unpaid time off to stay at home with school-age children.

On the other hand, while the benefits are unevenly distributed, the housing situation in Japan has steadily improved in terms of size, cost, quality and design, and working at home need not be overly burdensome today. Many freelancers I know have worked at home for years, venturing out for meetings, site visits, social life and the like.

Both their homes and the amenities and services of Japanese cities make this easier and more convenient.

Westerners might imagine that the typical Japanese house is the airy, sparsely-appointed tatami-matted dwelling seen in films and historical images. Back then, most people worked at home, enjoying compact writing tables and book cabinets, as well as comfortable cushions and arm rests. These were designed to be used while seated on the tatami floor and easily stowed away when not in use.

Generally, there was little to distinguish a study from a sleeping space, since the same room could easily serve both functions. Those of means often had beautiful built-in windowside writing desks called tsukeshoin, designed with intricate shelving and cabinets decorated with fine carving, painting and metalwork.

Fast forward to today. Although traditional-style Japanese homes can still be found, particularly in rural areas, lifestyles in the country have blossomed in variety. Due to the high cost of land in cities, space remains a valuable priority.

The size of typical houses and apartments has steadily inched upward over the course of the postwar decades, and new city apartments for a family of three are likely to be about 50-70 sq. meters. As in the U.S. and elsewhere, the housing stock in Japan accommodates single parents, childless couples, families with children, three-generation households and homes shared by a group of unrelated adults. 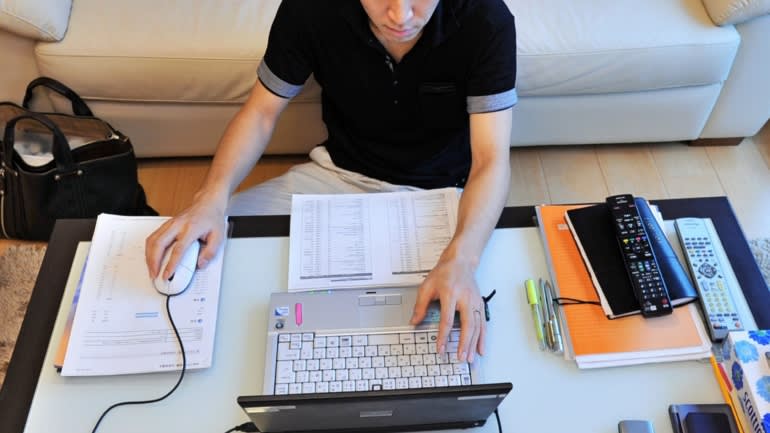 Working at home need not be overly burdensome today. (Photo by Yoshiyuki Tamai)

Many elderly residents live alone in houses which are now too big for them, while young people are likely to live alone in extremely small one-room apartments of 25 sq. meters or less.

There is definitely a trend in Japan toward including home offices and other kinds of workspace in new home designs, inspired by developments overseas as well as by those beautiful local traditions. Japanese designers are masters of foldaway and transformable furnishings, and at devising attractive lighting through window placement and shading ideas inherited from centuries past.

Those able to hire an architect are likely to get something wonderfully customized to their needs regardless of the size.

A tour of model homes will reveal many neatly devised and compact options for worktables and desks that provide some insulation from distraction as well as ingenious storage. The best new home office space shows great attention in providing a sense of privacy as well as enough openness to avoid claustrophobia and fatigue.

This means natural light and sightlines to larger spaces beyond, a view of a tiny garden or perhaps a slight change in level so the desk can overlook a living room or bedroom.

As in other parts of the world, unused bedrooms are often the best option for a home office, and Japanese developers may include rooms indicated as flexible space to highlight these possibilities. Many of my friends who are writers, editors or academics have cozy and functional places for writing and research at home. Still, many others work at the kitchen table.

Homes do not exist in isolation, however, and livability also depends on what the surrounding neighborhoods and communities provide. One of the greatest things about living in Japan is the home delivery infrastructure, including a wide variety of fine meals one can have delivered promptly at moderate cost.

Another is the ubiquity of convenience stores which provide prepared foods but also banking, shipping, bill-paying, ticket-purchasing and almost any service a busy home worker might require.

Japanese homes are livable largely because of all the living done outside the home. And now that so many people are stuck at home for a while, I imagine they will soon be longing for the outdoors -- regardless of how good their work space is.

Azby Brown has lived in Japan since 1985 and is a widely published author on Japanese architecture, design and environment. From 2003 until 2017 he was the director of the KIT Future Design Institute in Tokyo.