China is spending more on technology and fast catching up.   © Reuters
CopyCopied

China's shift into more advanced industrial exports is increasingly transforming what used to be a complementary trade relationship with Japan into a primarily competitive one.

Previously, Japan exported large amounts of machinery to China, a good part of which went into factories set up by Japanese companies. This has gradually changed over the past few decades as massive Chinese domestic investment has greatly reduced the importance of foreign direct investment.

With official encouragement, Chinese companies have been substituting domestically produced machinery for Japanese imports. As a result, Japan now has a growing trade deficit with China. Last year, the gap reached 1% of Japan's gross domestic product. The growing competitiveness of Chinese machinery producers in turn is emerging as a threat in other export markets that Japanese producers have long dominated.

For some sectors, it is probably too late already for Japan Inc. to fend off its rising Chinese challengers. But not all hope is lost. If they can focus clearly on the Chinese competitive threat, Japanese companies, with a bit of help from the authorities, stand a chance of maintaining their lead in a number of key sectors. The key will be putting far more energy into research and development, traditionally a strength of Japan Inc.

At first glance, the Japanese export picture would appear healthy enough to allay worries about the Chinese threat. Overall Japanese exports rose 3.9% in July from a year earlier and machinery shipments have been particularly strong recently. Most observers forecast exports to keep rising this year.

The recent gains, however, are due more to quickened economic growth, and thus demand, in developed markets like the U.S. and EU than to improved Japanese competitiveness. Indeed, looking at the export picture on a sector-by-sector level can be disheartening. Analysis by Natixis of what is known as revealed comparative advantage, a measure of a country's relative strength in international markets based on trade flow data, shows that Chinese companies have increased their competitiveness in all of Japan's top 10 export sectors. The competitiveness gap has particularly narrowed in the categories of electrical components and semiconductors.

In the case of semiconductors, Japan's second-largest goods export, the sector has lost three-quarters of its revealed comparative advantage over Chinese rivals since 2006. On the other hand, Japanese exporters still retain a broad lead over up-and-coming Chinese producers in automobiles --- Japan's biggest export sector -- as well as civil engineering equipment and general machinery.

Yet Japanese companies in these sectors can hardly rest easy as Beijing remains keenly focused on raising the country's industrial prowess in advanced technologies. Its key tool has been R&D. Public and private R&D spending in China in 2015 reached an estimated $409 billion, equivalent to 2.1% of the country's gross domestic product. As a result, Chinese companies applied for nearly as many international patents last year as did their Japanese peers.

On a proportional basis, Japan Inc. spends more on R&D than China, with last year's total reaching 3.3% of GDP. But on an absolute basis, with Japan's economic growth sputtering along, this equated to only around $170 billion in actual spending. 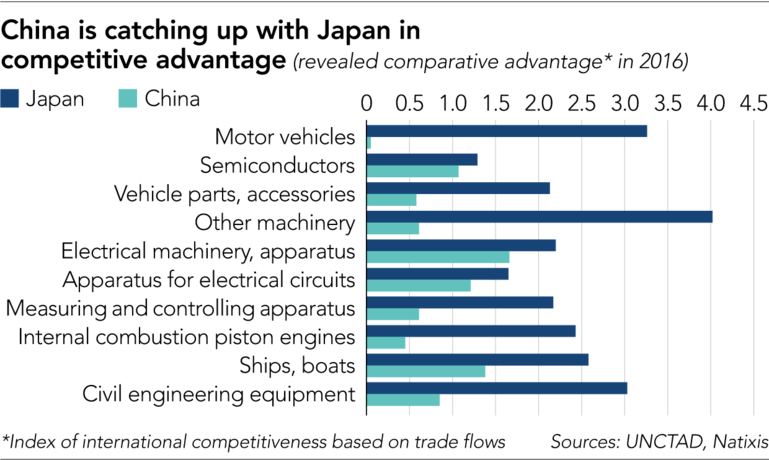 The spending gap will widen if both countries only hold steady their R&D investment as a share of GDP given the faster growth of China's now much-bigger economy. Japan can hardly hope to keep pace given the government's weak fiscal position.

Japan Inc.'s best hope of staving off Chinese rivals will be to concentrate R&D efforts on a few key sectors, namely those like autos where Japanese players still hold a large competitive lead. Indeed, corporate spending on machinery and auto parts R&D has represented as much as 36.3% of Japanese R&D in recent years.

Major Japanese automakers plan to spend a record 2.95 trillion yen ($26.69 billion) on R&D this fiscal year, with a particular focus on networked, self-driven and electric vehicles; the industry already accounts for nearly a quarter of overall manufacturing R&D in Japan, having raised spending by 50% over the past eight years.

Toyota Motor is taking the lead, alone budgeting 1 trillion yen for research, with a third of that amount allotted for next-generation vehicles. Nevertheless, Toyota's expenditure stands to be 50% smaller than that of Volkswagen.

Japanese automakers thus are set to lag behind other global major players when they should be expanding R&D investment more aggressively to remain competitive in the global market, especially given China's moves to seek leadership in electric-vehicle development.

The development of self-driving has meant a shift of focus away from mechanical engineering, an area where Japanese companies traditionally have had an edge, to information technology. Although Japanese carmakers have preferred to develop technologies internally, they should consider forming alliances with tech companies who could bring in needed capabilities.

Some moves are afoot. Toyota in May said it would invest 400 million yen in Japanese data analysis company Albert to bolster its self-driving technologies and the next month put $1 billion into Southeast Asian ride-service app Grab. Honda Motor meanwhile has joined an autonomous-driving technology consortium led by Chinese internet company Baidu.

While there is little chance Tokyo will get as deeply involved in pushing new-generation vehicle development as Beijing now is, the government could support the R&D push through tax incentives or subsidized purchases of electric vehicles as part of its environmental or energy strategies. Such policies could also be used to promote the reallocation of resources among semiconductor producers and car producers, since Japan's advantage in chips is quickly waning and much harder to expand on at this point.

The government could also help by developing new-generation vehicle standards which are in harmony with global ones. It is vital that Japan avoid the mistakes seen with mobile phones and other electronics, in which its national standards were so far out of sync with those abroad that product development had to be separated to the detriment of the global competitive edge of Japanese companies.

With Japan Inc. flush with cash, financing bigger R&D budgets should not be difficult. The key is to develop a well-targeted approach that concentrates on fending off the Chinese challenge by focusing on Japan's still-formidable competitive advantages.

Alicia Garcia-Herrero is Asia-Pacific chief economist at Natixis, and a senior fellow at Bruegel, a Brussels-based think tank.