Japan must learn from failure of Abe's Russia policy Prime Minister Shinzo Abe's "new approach" to relations with Russia has been an embarrassing failure -- yet it has one redeeming feature: it demonstrates beyond doubt that no amount of cozying up to Moscow will result in the return of any of the Russian-held Southern Kuril Islands, which are claimed by Japan as its Northern Territories.

Published on May 19, Japan's Diplomatic Bluebook, which provides an official statement of foreign policy, revealed a notable toughening in Tokyo's stance on the territorial dispute with Russia.

While the previous year's Bluebook made no explicit claim to the Northern Territories, the 2020 edition states that they are "our country's sovereign islands." It affirms that the status of all four islands must be settled before any peace treaty -- Japan and Russia never officially concluded the second world war -- can be signed.

This reversion to more forthright language is an admission of defeat in Abe's pursuit of a deal to regain two of the islands. This policy was never officially announced but Abe's intentions were clearly communicated by his agreement with Russian President Vladimir Putin in November 2018 to advance peace treaty talks on the basis of the 1956 Joint Declaration. This document promises the transfer to Japan of Shikotan and Habomai after the conclusion of a peace treaty, but says nothing of the much larger islands of Iturup and Kunashir. 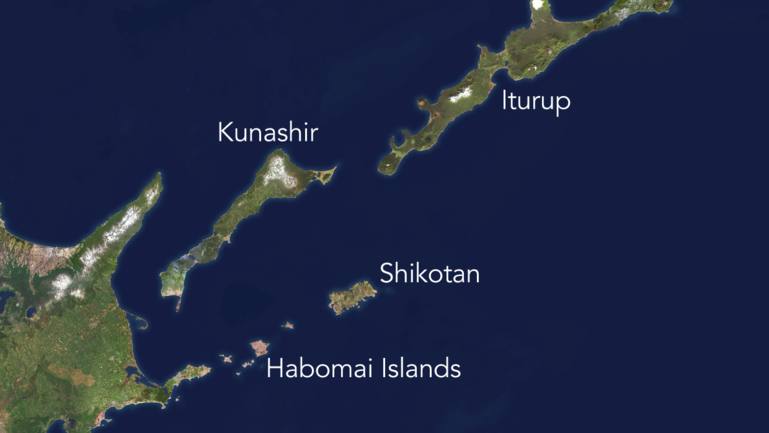 Abe sent a signal of his willingness to settle for a two-island deal.   © maps4media/Getty Images

To induce Putin to accept this deal, Abe visited Russia 11 times between 2013 and 2019. He offered a selection of sweeteners, including an eight-point economic cooperation plan and the promise that no U.S. troops would be permitted on the transferred territory.

Abe distanced Japan from efforts to isolate Russia after the annexation of Crimea in 2014, and Japan was the only Group of Seven country not to expel Russian diplomats after the botched assassination of Sergei Skripal with a nerve agent in Salisbury in March 2018.

Rather than reciprocate with concessions of its own, Moscow has pressed its advantage. When Putin visited Osaka in June 2019, he refused to follow through on his promise to accelerate talks based on the Joint Declaration. Worse, Putin is now backing a revised constitution at home that features an amendment explicitly banning territorial concessions. This was due to be put to a referendum on April 22, though the vote has been delayed because of COVID-19.

Additionally, in April Russia moved the official end of the second world war from September 2 to September 3. This is also seen as an unfriendly gesture since the Soviet Union long marked September 3 as Victory Day over Japan. Tokyo has already informed Moscow that, if military celebrations are held in Russia on this day, Abe will not attend. The Japanese leader had been expected to attend Victory Day events in Moscow on May 9, commemorating the surrender of the Nazis, before these were also canceled.

Abe's inability to achieve any progress whatsoever on the territorial issue is a personal blow but it proves an important point. There are those in Japan who maintain that a territorial deal with Russia is possible if only the Japanese leadership shows sufficient commitment and willingness to compromise.

These politicians and former diplomats argue that several supposed opportunities were missed in the past, such as when Putin-friendly Yoshiro Mori was replaced as prime minister by Junichiro Koizumi in April 2001. The comprehensive failure of Abe's efforts demonstrates the fallacy of such thinking.

The truth is that Russia has no intention of giving up even an inch of the disputed territory. Why should it? The absence of a peace treaty makes no difference since Japan is not a military threat and already cooperates economically with Russia. The Russian public would be outraged by the transfer of territory that they believe was rightfully gained through the sacrifice of their forebears in the second world war.

Furthermore, the continuation of the territorial dispute is a useful diplomatic lever for Russia. By periodically stoking Tokyo's hopes and agreeing to engage in talks, Moscow can deter Japan from taking unfavorable steps and can induce political and economic concessions. Without the territorial dispute, Tokyo would be free to adopt a much more assertive stance.

As the post-Abe era approaches, Japan's next prime minister should learn from these mistakes. Abe spent over seven years testing to destruction the theory that a two-island deal can be achieved. His successor should not repeat the experiment.

Japan's best course is to keep true to the principle of Japanese sovereignty over all four of the islands and to avoid being led astray by the mirage of a compromise agreement.