Trailblazing cabinet minister Seiko Noda has hinted at a run There is a favorite anecdote I share when describing the dismal state of Japan's gender dynamics. It involves Sheryl Sandberg, a packed Tokyo ballroom, bad coffee and still raises my blood pressure 20 years on.

In 2000, during my Washington reporting days, I traveled around Asia with then-U.S. Treasury Secretary Lawrence Summers. At a Tokyo speech, I sat next to Sandberg, who before going on to Facebook fame was Summers' chief of staff.

We were in a room of, say, 500 people, and Sandberg was one of a small handful of women. This was after days of back-to-back all-male meetings. At times, staff brought the men coffee, but not Sandberg. It was assumed she was support staff unworthy of a cup.

That evening, looking around with rolled eyes and highly intended sarcasm, the future author of Lean In leaned over said to me: "There are women in this country, right?"

The good news is that Japan is a different place in 2021 as Yoshiro Mori, finally, gets his misogynistic comeuppance. On Friday, the head of the Tokyo Olympic and Paralympic organizing committee was forced out after complaining that women in meetings talk too much. The decision was a reaction to Olympics volunteers quitting, social media pulsating with outrage and corporate sponsors balking.

It was grand, too, that when the Olympic organizing committee tried to replace Mori, 83, with an 84-year-old ally, the national government said, uuuhhh, no. Progress, indeed.

Just not enough. To Jeff Kingston at Temple University, the optics of the Mori saga, and Prime Minister Yoshihide Suga essentially covering for him, played "like Monty Python-esque parody."

Where, after all, has Suga been for much of his 152 days as prime minister? His responses to COVID-19, returning deflation and nine days of Mori refusing to quit had been maddeningly lifeless. So, sadly, is Suga's commitment to gender equality. In fact, he barely mentions it.

With his approval rating on the floor and electoral prospects dimming, it is time Suga's Liberal Democratic Party did something smart and named a woman as Japan's next leader.

Really, this whole patriarchy thing is not working out for the third-biggest economy. One of the most obvious failings is treating half of Japan's population as support staff.

There is, admittedly, some hyperbole in these words. But it is hard to believe gender-equality remains such an acute problem 20 years after Mori's own ignominious resignation from the premiership. The problem is not a uniquely Japanese one. Japan, though, stands out among Group of Seven nations as the one the International Monetary Fund routinely calls out on gender.

What makes the Mori controversy so frustrating is how tone-deaf Suga's LDP appears on the world stage. There is a long-established tendency in Japan to roll our eyes when the old-boys-club government circles the wagons. We utter shoganai, which means that it cannot be helped.

Yet as China races ahead and Southeast Asian upstarts from Indonesia to Vietnam woo multinational companies, it is long past time for Japan to properly utilize the female workforce. All available data show economies that empower women are the most innovative, productive and nimble. And, it turns out, those run by women have had the most success defeating COVID-19 -- from Taiwan to New Zealand to Germany.

Shaking things up in Japan means trying something different. And since Mori left the prime minister's office, nine governments -- including Suga's now -- paid lip service to women. Each gave speeches and offered the odd policy tweak to close the gender divide. Each just assumed that the problem would take care of itself over time.

Not so much. Supporting a female successor to Suga in the general election that must be held by October could be the remedy. Though we are not in the business of endorsing candidates, Seiko Noda, a trailblazer in her own right, has hinted at a run.

In 1998, the lawmaker, then 37, became, at the time, Japan's youngest postwar Cabinet member. Since then, she has handled a variety of portfolios from posts and telecommunications to science and technology to gender equality.

Noda is a leading voice on ways in which highly indebted Japan should address the declining birthrate-aging population dilemma. When you look at Japan's biggest economic challenges, Noda checks many of the experience boxes voters might crave. Abe's former defense minister, lawmaker Tomomi Inada, has expressed prime ministerial ambitions to shake up the boy's club.

Here, let us give a shoutout to Tokyo Governor Yuriko Koike. The one-time defense minister's transparent and hands-on COVID-19 assault makes for quite a contrast to the laid-back national response by Suga and his predecessor Shinzo Abe. If Tokyo does manage to avoid canceling the Olympics set to begin in July -- still a big if -- it will be largely thanks to Koike's leadership. 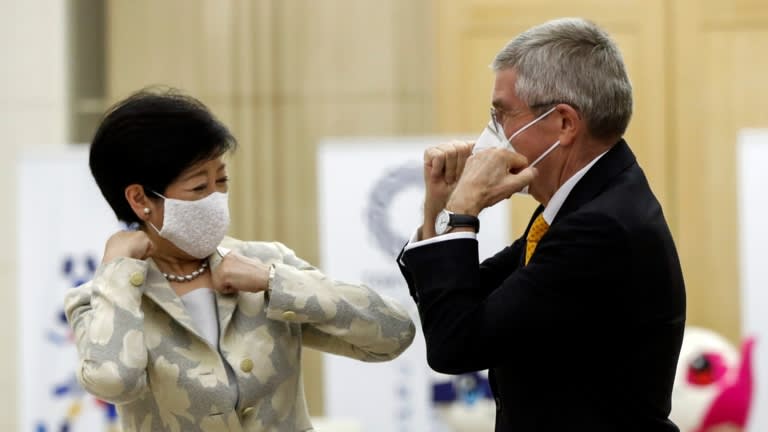 Yuriko Koike and Thomas Bach, President of the IOC, bump elbows in Tokyo in November 2020: if Tokyo manage to avoid canceling the Olympics, it will be thanks to Koike's leadership.   © Reuters

Around Koike, the old-boys club is still calling the shots. "Japan seems happy to give opportunities to clueless octogenarians but overlooks women in all fields," Kingston says.

What better way to turn the page than breaking Japan's ultimate political glass ceiling? Over the last 20 years, a succession of male leaders ran Japan's equality hopes into the ground. In 2006, the first year World Economic Forum published its gender index, Japan ranked 79th. Today, it is 121st.

Why not give a female prime minister a shot? Japan has tried just about everything imaginable to boost growth and eradicate deflationary forces. Just not the one thing many economists agree would work: giving the women a chance to lead.