Japan needs to switch to sustainable tourism from numbers game

After coronavirus, travelers will want deeper experiences the country can provide

The coronavirus pandemic throws a huge wrench into our public health system, economy and everyday life, leaving no corner untouched. While the sum of its long-term impact remains immeasurable, one industry already faces a destructive blow, tourism.

The immediate damage is ghastly. The international hub airports now resemble ghost towns. When demand slowly returns, the narrative of tourism will be rewritten. We will think twice before signing up to long-distance flights, being more selective about our travels. The sight of a crowd no longer excites but repels us. The trauma of social distancing will linger.

Crises accelerate and amplify existing, if subtle, undercurrents, and this crisis will bring to the fore the trend of soft or sustainable tourism, in which travelers spend longer immersed in the local culture they respect, rather than on coach tours ticking the boxes of famous sites. Agritourism in an old farmhouse is soft tourism. So is trekking Kumano Kodo, an ancient pilgrimage.

Japan is in a good place to harness soft tourism but only if it is ready to rethink its current strategy, which relies on high numbers rather than high quality.

When it jump-started its ascent as an international travel destination in the 2000s, Japan went for hard tourism. Chinese tourists arrived en masse and bought anything from cosmetics to rice cookers, which propped up sagging domestic personal consumption.

Progress was measured in the growing number of visitors. The total ballooned to 32 million in 2019, close to fivefold from 6.8 million in 2009. The success was such that it started to take a toll with overtourism in popular destinations such as Kyoto.

Now the influx has come to a screeching halt. According to the Japan National Tourism Organization, the number of inbound tourists into Japan in March 2020 was down 92% year on year, to 194,000. Clearly, the Japanese government's target of 40 million inbound tourists this year is now a pipe dream.

This is devastating to the retail and hospitality sectors in the short term. In the long run, however, it is not all bad news.

Tourism benefits the destination country by making personal allies around the globe, a scarce currency in a divided world. In this light, soft tourism is better than hard, not to mention its reduced impact on the environment. Moreover, the shift to soft tourism, while causing a short-term drop in the number of visitors, would point to longer stays and the resulting increased spend per capita. 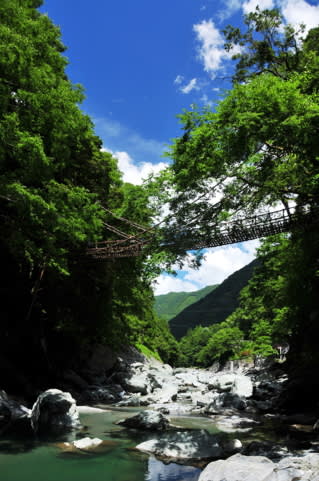 The vine bridge over the Iya Valley in Tokushima: Japan has much to offer. (Photo provided by Miyoshi City)

Japan has much to offer. It is blessed with diverse natural attractions and local cultures. Some regional gems such as the remote Iya Valley in Tokushima prefecture, popularized by American author Alex Kerr, already attract a worldwide cult following.

But we must develop more attractions outside the Golden Triangle of Tokyo, Kyoto and Kanazawa to fully unlock the country's potential for slow tourism. It takes an entrepreneurial mind, public-private financial support and a communitywide effort to turn an idea for a sustainable ecosystem into a wide array of tourism destinations.

Akiu Winery, 30 minutes' drive outside the city of Sendai, around 350 kilometers north of Tokyo, is one such example. It is an unconventional venture since Miyagi province is close to bottom in grape production.

Akiu's founder, 52-year-old Chikafusa Mohri, was an architect with little knowledge of winemaking at the outset. Yet he started the winery determined to contribute to the resurrection of Tohoku region, where he lived, after the tsunami devastation caused by the Great East Japan Earthquake in 2011.

Six years into production, Akiu Winery now serves as a hub of gastronomical tourism in Tohoku, dubbed Akiu Valley, working with local fishermen and farmers. Mohri expects tourists to spend days in Akiu Valley hiking, eating and drinking at the winery and an upcoming brewery. This entrepreneurial venture proves that a historical site or deep cultural heritage is not a must in creating a tourism success. By wrapping a business idea around existing local assets, agriculture and fishery in Akiu's case, it is possible to create an appealing narrative.

This sort of tourist experience adds a new face to the soft power of Japan, beyond the conventional pairing of tradition and modern subcultures.

The government can spend its money more wisely to promote sustainable tourism. David Atkinson, a former Japan-based banking analyst turned sharp critic of the Japanese tourism industry, points out that much of the 100 billion yen ($930 million) spent by the government on tourism is wasted on self-congratulatory promotion. User-unfriendly and obscure homepages of local tourist sites gather dust.

Promotion is a supplement to actual attractions, not a substitute. Besides, enchanted visitors are a better source of promotion through social media than any official homepage. The fund for tourism, therefore, should be directed to supporting the green shoots of local sustainable tourism content. A bonus is that these destinations will also attract Japanese vacationers who prefer proximity in the post-pandemic world.

The 40-million visitor ambition is off the table for now. But it is not a time to give up on tourism. Rather than being driven by the numerical target, Japan must shift gear from hard to soft tourism. When the epidemic settles, Japanese tourism will emerge more diversified and resilient.