Economic slowdowns are rarely as ill-timed as Japan's latest.

Recession chatter is hitting a fever pitch just as Shinzo Abe seeks another election mandate and hopes to pull off a twice-delayed sales-tax increase. It comes, too, as the prime minister aims to harness the feel-good factor from the new "Reiwa" imperial era to amend the pacifist constitution.

All is now in doubt as Abe's six-and-a-half year reflation scheme comes full circle. Indexes on leading and coincident indicators both declined in March. Most significantly, the Cabinet Office said economic conditions are "worsening," a characterization drenched with significance in Tokyo circles.

The last time it was used was between October 2012 and January 2013, when Abe returned to the premiership promising bold reforms. That was a few months before Abe named Haruhiko Kuroda to turbocharge the Bank of Japan's approach to defeating deflation and restoring stable growth.

On the surface, it appeared to work. Aggressive easing, and a resulting 30% yen depreciation, helped produce the longest expansion since the 1980s. Until Donald Trump began a potentially-devastating trade war that is, one that may already have pushed Japan into recession -- deja vu all over again for Abe and Kuroda.

It is a mistake, though, to place all the blame on the U.S. president's tariffs and for Tokyo to stick to business as usual. Unfortunately, Team Abe appears to be doing just that.

Already, officials are beating the familiar fiscal-policy-response drum. Abe's Liberal Democratic Party loves a good short-term stimulus plan. Bold moves to increase competitiveness and innovation in the longer run, not so much.

This last failure deserves far more scrutiny ahead of the May 20 release of the latest gross domestic product data, which could confirm recession fears.

Sure, Trump's assault on Chinese trade is catalyzing a darkening of global conditions. Corporate Japan just logged its first profit dip in three years amid falling demand from Asia's biggest economy. That 2% drop in net profits for the fiscal year ended March helps explain why Japan's coincident economic indicators slid 0.9 of a point in March from the previous month. 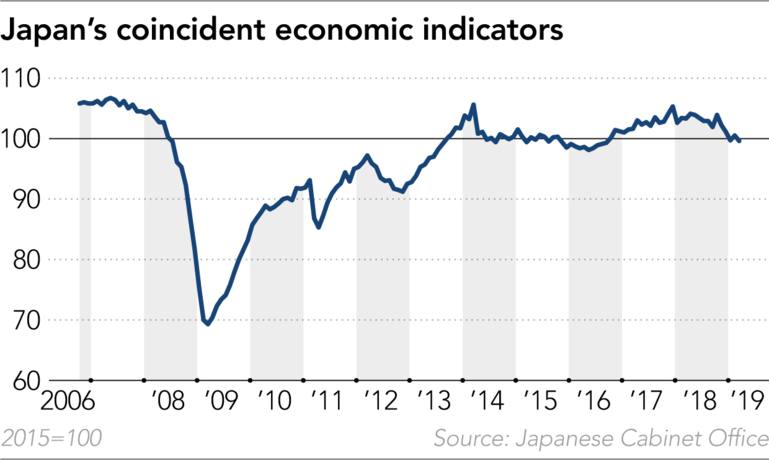 Worries Trump may intensify the trade war, and of Chinese retaliation, also are slamming leading indicators. Combined data on factory output, consumer sentiment, retail sales and job offers fell 0.8 of a point. One big concern is that Trump might follow through on threats of a 25% tax on imports of cars and auto parts, upending Asian supply chains.

Another is Tokyo's bilateral trade talks with Washington. With a China deal devolving into rancor and confusion, Trump will be looking to pal Abe for a quick win on the world stage. That pressure, too, is terribly timed for Abe heading into July upper house elections.

Even a mild downturn gives Abe less latitude to placate Trump with the odd concession or two. Abe already expended vast political capital joining the U.S.-led Trans-Pacific Partnership, only to see Trump renege. He signed the globe's biggest trade deal with the European Union. How willing might Nagatacho be to bow even more deeply to this White House?

No world leader, after all, has been a better friend to Trump than Japan's. It is high time Trump reciprocated. Instead, Trump is looking to Abe for concessions from agriculture to autos that Tokyo is not according the other 10 TPP members or the EU. Quite an ask of Abe in an election year -- and at a moment when recession risks abound.

But this is also a moment for Team Abe to look in the mirror. If Abe had taken more assertive steps to rekindle Japan's innovative spirit, reduce red tape, and modernize labor markets and address a fast-aging population, the economy would be far less vulnerable to Trumpism. Putting stimulus ahead of structural upgrades is now backfiring as global demand wanes.

Yet Tokyo is still more concerned with the symptoms than the underlying problems. Chief Cabinet Secretary Yoshihide Suga is already suggesting additional stimulus measures are forthcoming.

He also, however, reminds us of the denial that has been a hallmark of Abe's premiership since late 2012. While trying to spin the Cabinet Office's "worsening" conditions warning on May 13, Suga insisted "economic fundamentals that support the employment situation and income are solid." Both views can't be right, of course. Recent data, including a 2.4% drop in exports in March from a year earlier, clearly suggest a worsening trajectory.

Suga claims, too, that plans to hike the consumption tax to 10% from 8% in October are a go. Never mind that the last one in 2014 -- from 5% to 8% -- slammed GDP hard, necessitating emergency stimulus measures. Why not just Google "Herbert Hoover" -- U.S. president in the 1930s depression -- and admit raising levies in a disinflationary environment would be a mistake?

Only another Lehman Brothers-like crisis could derail a tax hike aimed at curbing runaway government debt, Suga says. But the trade war has the makings of another "Lehman shock." In slow motion, though. Last week, Trump raised 10% tariffs on $200 billion of Chinese goods to 25%. Next, he might target everything the U.S. imports from China -- more than $500 billion worth. After that, the global auto sector. Then, who knows?

If Abe refuses to prostrate Japan Inc. before the "America First" White House, might Trump impose Tokyo-specific levies? Might he take to Twitter and slam Tokyo as a currency manipulator? Might he try to shake down Abe's party for protection money to maintain the U.S. security blanket the way he did South Korea?

None of these risks seems off the table in the post-Mueller report world. Trump seems increasingly disturbed since last month's release of special counsel Robert Mueller's probe of 2016 U.S. election irregularities. As impeachment talk intensifies, the odds of Trump lashing out abroad are rising fast. Oil markets are gyrating as Team Trump blunders toward confrontations from Tehran to Caracas. Pyongyang next?

With so many Trumpian wild cards complicating 2019, some serious multitasking is warranted. Toss more stimulus at the economy, if need be. The BOJ, too, may soon add fresh liquidity should the yen rally. But, directly or indirectly, admit the inevitable and postpone the October tax hike.

Moreover, stimulus is not enough. Even more important is regaining reformist momentum. Abe's moves to tighten corporate governance and entice more women into the labor market were good starts. It is time to add teeth to these policies and myriad others.

No time like the present to use tax tweaks to incentivize a startup boom. Bolder action is needed to encourage companies to hire more female executives, attract more foreign talent and give tens of millions of workers a sizable raise to boost domestic demand for good.

The answer to both China's rise and Trump's chaos is prioritizing reform. Unfortunately, we are hearing more about stimulus as an ill-timed recession develops.