Japan's coronavirus response is flawed -- but it works

Andy Crump is a consultant at the Medical Governance Research Institute, or MEGRI, and a visiting professor at Kitasato University, Keio University and St Luke's International University in Tokyo. He previously worked as a multimedia communications officer at the World Health Organization for 15 years. Since 2004, he has handled the English-language communications for Nobel Prize-winning biochemist Satoshi Omura.

Epidemics of novel infections are inevitable -- the only way to control them successfully is with an evidence-based, integrated strategy. Japan appears to be pulling this off with COVID-19, though it is not free of risks, mainly stemming from mismanagement at the local and central government levels along with unfortunate behavior among some health care workers.

Japan recorded its first COVID-19 case in mid-January, but the next case did not materialize until the advent of RT-PCR test kits in early February. A Ministry of Health, Labor and Welfare report showed that as of midday on Wednesday, the country had carried out over 188,000 of these tests on domestic cases, finding 15,854 positives. The same report said 5,162 people needed hospital treatment, including 259 currently with severe symptoms -- needing ventilators or intensive care.

Meanwhile, 9,851 had been discharged from hospital and 668 deaths had been recorded.

Despite the deaths, these figures are the envy of most other coronavirus-stricken nations, including China. They are a testament to the fact that the "Japan model" worked, at least in the initial stages.

Based on China's experience and guidelines from the World Health Organization, Japan has implemented a cluster-based approach to disease control. This was investigated on the Diamond Princess cruise ship quarantined off Yokohama.

Essentially, many people on the ship were not infected with SARS-CoV-2 -- the virus that causes COVID-19 -- even though they had close contact with infected individuals. The infections that did occur were linked to certain "spreaders," resulting in clusters of infection.

The basic premise of Japan's strategy is "Test-Trace-Treat," or TTT. Once an infected individual has been identified through outward symptoms such as fever, each infection cluster is traced to the original source and everyone in the cluster is isolated and treated as necessary. This precise testing means that widespread testing of the population is not required, making it extremely cost-effective.

The approach was proven in February, when Japan's northernmost main island of Hokkaido experienced an outbreak. A cluster-based, TTT intervention -- along with closure of transport routes and a stay-home request from the governor -- successfully contained the outbreak. 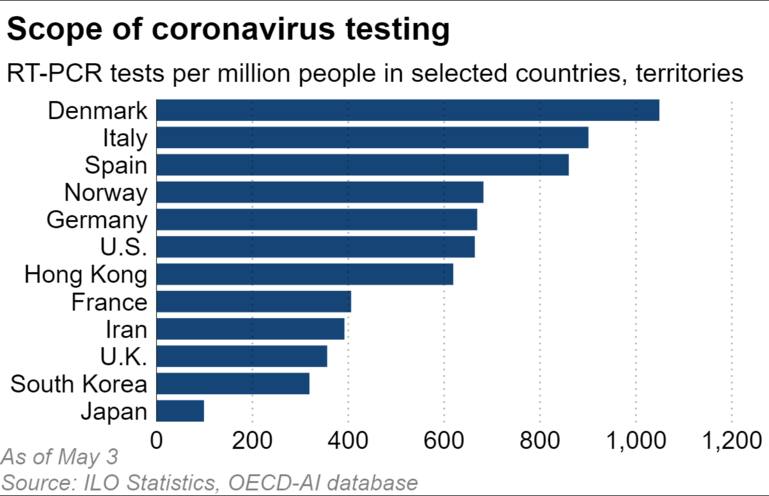 Naturally, there were other probable contributing factors. The main SARS-CoV-2 virus circulating in Japan, as in most of East Asia, was the less-virulent B-type strain. In addition, although it was generally accepted that each carrier, on average, infected over two others, Japanese experts found that infected individuals in Japan were only spreading the virus to one other person.

The fact that Japan's original RT-PCR test appeared to be reliable -- unlike those in countries such as the U.S. and U.K. -- also played a part.

The preferred protocol is for any positive test to be confirmed by a second test. Before any patient can be designated as cured and fit for discharge from hospital, two negative tests, 24 hours apart, have to be completed. Consequently, in theory, every COVID-19 patient who survives requires at least four RT-PCR tests.

Tokyo, a metropolitan center of 13.5 million, is the worst affected part of Japan. The latest figures from the Tokyo Metropolitan Institute of Public Health -- one of the few places where per-person test data are regularly reported -- show that 48,011 such tests have been carried out in the institute on 13,640 individuals, for an average of 3.5 per person.

The Japan model also incorporates a "3 C's" concept. This requires the population to avoid closed spaces with poor ventilation; crowded places; and close-contact settings. It also builds on traditional Japanese behavior patterns and etiquette, such as wearing face masks, and little communal physical contact such as shaking hands or cheek kissing. Animated, loud conversations on packed commuter trains are considered impolite, and avoiding them minimizes infective droplet spray. Karaoke bars, on the other hand, have proved to be significant sources of infection.

Taken together, these initiatives have helped Japan hold down its case count and maintain a degree of normal business and economic activity, despite the government urging people to work from home. Nevertheless, there have been several major factors that have combined to slow down Japan's progress in the fight against COVID-19. 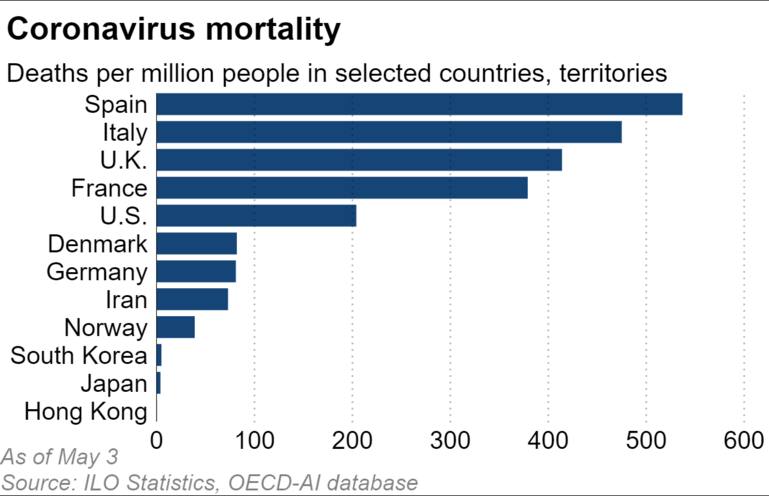 Firstly, Japan's rigid Infectious Disease Law mandates that everyone infected with a Category-II disease (as COVID-19 was categorized) must be hospitalized, even if they display only mild symptoms or none at all. This policy led to specialist wards overflowing, threatening the nation's excellent health system. Fortunately, prefectural governors began to ignore the law and started booking hotel rooms and other facilities to isolate non-serious COVID-19 patients.

Another major issue is a lack of suitable tracers. Other countries in East Asia that have successfully employed a cluster-based TTT strategy, such as China and South Korea, have used small armies of specialist tracers. The approach requires professional and expeditious tracing, with contacts being found and tested within 24 hours.

China used 1,800 teams of five epidemiologists each to trace tens of thousands of contacts daily, resulting in well over 700,000 people being processed. Countries such as the U.K. and U.S. are just starting to have tracer teams working, even after tens of thousands of COVID-19 deaths in each country.

Contact tracing is a specialist skill, one that is not available in many countries, including Japan. Consequently, tracing in Japan has not been carried out as it should have been because the 55,000 staff of Japan's Public Health Centers, most of whom are not trained in infectious disease tracing, were overwhelmed. This allowed community transmission to begin. 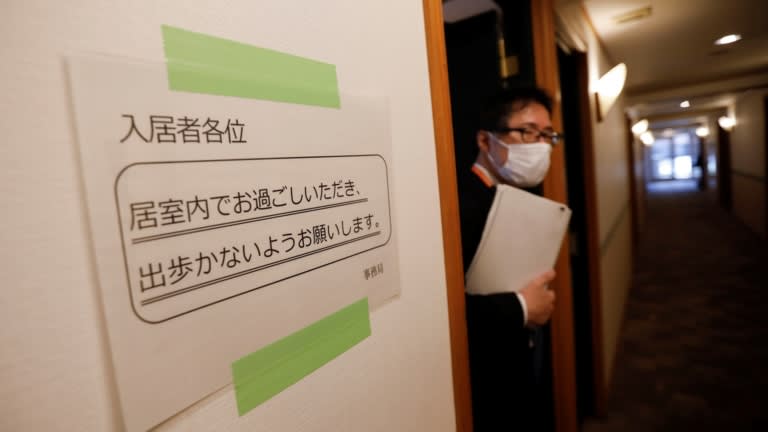 Japan is using hotels like this one to accommodate asymptomatic coronavirus carriers and those with light symptoms. The sign advises guests to stay in their rooms.   © Reuters

With respect to treatment of COVID-19 patients, Japan's authorities clearly failed in their basic task of protecting the health service workforce -- perhaps lulled into a false sense of security by the early success in controlling the disease. Although the government traditionally keeps large stockpiles of antiviral and other medicines, supporting the nation's drugmakers in the process, it failed to build a stockpile of personal protective equipment (PPE) for medical, nursing, cleaning and other staff.

Proper PPE sets include at least one pair of gloves, a face mask, head/hair covering, goggles or visor, waterproof long-sleeve gown and shoe coverings. Ideally, for assessing a suspected COVID-19 case, a minimum of three to six PPE sets are required. For a confirmed case, at least 14-15 sets per patient per day are needed, while patients in serious condition can raise the daily minimum to 15-24.

Inadequate supplies have contributed to mismanagement and poor practices in Japanese hospitals, which have resulted in high levels of nosocomial transmission. The worst example was at Eiju Hospital in Tokyo. In March, several infected individuals were sent to Eiju, despite it not having an infectious diseases department or capability to isolate patients. The infected were kept in wards with other patients, causing a reported 187 infections in the hospital and 24 deaths. Of those infected, at least 44 were doctors, nurses and other medical staff. 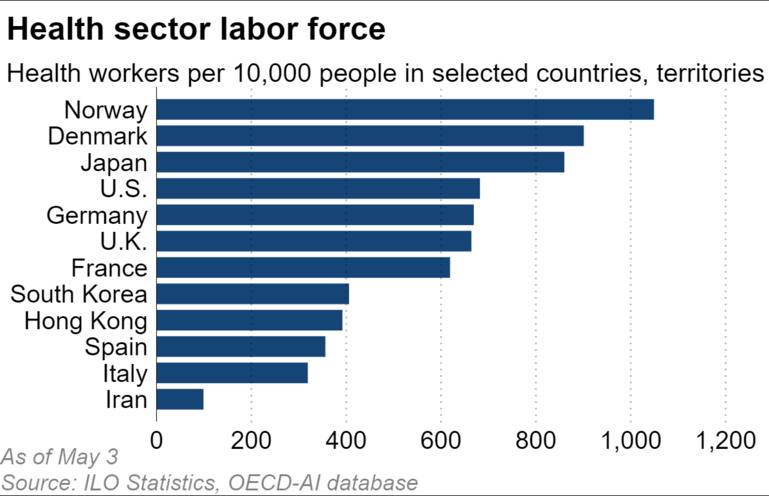 Moreover, the transfer of one Eiju patient to Tokyo's Keio University Hospital led to nosocomial infections there, where around 6% of its non-COVID-19 patients have tested positive for SARS-CoV-2. By April, at least 11 major hospitals in Japan were reporting significant nosocomial COVID-19 outbreaks.

Still, Japan is a very densely populated, "super aged" society with the world's highest density of citizens over 65. It is also close to China, where the SARS-CoV-2 virus first appeared, and received 925,000 Chinese visitors in January plus a further 89,000 in February. Consequently, Japan would be expected to have a high number of infections.

Yet, despite gloomy forecasts by Japanese politicians, so-called experts, and the media -- especially overseas media -- Japan's status with respect to COVID-19 remains relatively good. The forecast upsurge in cases has not materialized and, in contrast, the number of new positive cases has been trending downward since early April.

It is impossible to predict what will happen now. But an objective, rational analysis of the data indicates that the Japan model for tackling COVID-19 appears to be sound and practical.

If proper resources are allocated to support the nation's health care workers and institutions -- including appropriate planning and properly staffed tracing systems -- it may well have every chance of continuing to protect the nation's citizens from a pandemic that has already caused widespread, catastrophic damage to public physical and mental health, as well as possibly irreparable harm to the global economy and the livelihoods of billions.