Troubles at Shimane and Suruga highlight difficulties of zero-interest rates We may soon find out if Suruga Bank is an isolated case or the new normal. (Photo by Shinya Sawai)
CopyCopied

Japan hardly seems to have got over one banking crisis when another arrives. The economy, after all, is still grappling with the fallout from one which ostensibly ended in the early 2000s.

Negligible returns on Japanese government bonds have led to regional banks dabbling in riskier assets, and on September 6 Shimane turned to SBI Holdings for $23 million of emergency capital.

But the 104-year-old institution is not even the most troubling sign in an industry posing fresh risks to Japan's financial system.

For another, look at Suruga Bank. In late 2018, Suruga got caught falsifying credit-screening documents for investment property loans. The Financial Services Agency in October banned it from offering new loans of that variety for six months, and a subsequent internal investigation found that $9.3 billion of $15.8 billion in loans had been made improperly.

In May, the embattled Shizuoka Prefecture institution had to seal a tie-up with Shinsei Bank, which says it will consider providing its partner with liquidity support if needed.

Regional banks offer the most convincing evidence that the Bank of Japan's 20-year experiment with zero-interest rates is backfiring.

The dynamic has accelerated since 2013, when Governor Haruhiko Kuroda came on the scene. At first, Kuroda's team loaded up on trillions of dollars of government debt. It cornered the stock market via exchange-traded funds. By the end of 2018, the BOJ's balance sheet topped the size of Japan's $4.9 trillion economy.

The real shock was Kuroda's January 2016 decision to introduce negative interest rates, rendering it even harder to make money. Last week, he said that pushing rates further negative "is always an option." That would impede profits even more. 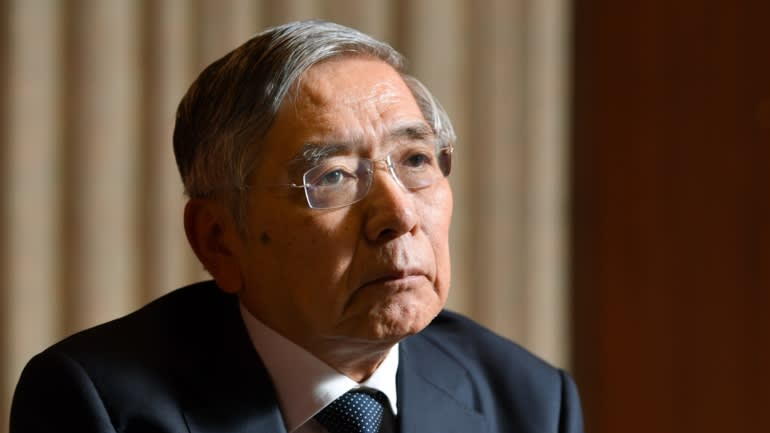 The demographic reality of a shrinking, aging population already mean fewer consumers and businesses seek loans, and piling deposits into government bonds becomes unworkable as the BOJ strong-arms the market. Banks often make their money from the spread between deposit and lending rates; as those differences disappear, so do profit margins.

In the case of Suruga and peers, it was U.S. company debt in the form of collateralized loan obligations, or CLOs, which they sought out. By December 2018, with the Suruga scandal in full swing, investment banks like UBS estimated that Japanese institutions in general were buying up roughly one-third of top-rated U.S. CLOs.

This move into assets that banks in the past would not have touched collides with increasing market turbulence.

Granted, the CLOs and other higher-risk assets on which lenders bet probably do not amount to 2008-like exposure, but regulators are taking few chances. Earlier this week, Bloomberg reported that authorities are surveying financial companies' holdings of foreign assets, particularly CLOs and other leveraged loans. We may soon find out if Suruga is an isolated case or the new normal.

These banks are so large -- with over $3 trillion of assets, or more than twice the size of Australia's gross domestic product -- that if they were to collapse in greater numbers, the effects could be felt globally.

Even if these regional banks do not blow up, they are still a problem for the BOJ, which has been throwing liquidity into them. The less they lend as demand falls, the lower the odds the BOJ will alter what Kuroda calls Japan's "deflationary mindset."

One partial solution would be to start shrinking the sector. Regional banks suffer from overcapacity. Many are more than a century old and pillars of their communities. That legacy leaves too many CEOs averse to merging or selling, so the industry fails to consolidate in ways that might cut costs and spark more innovative use of technology.

In April, Tokyo announced plans to revise antitrust rules to allow more regional lenders to merge. Prime Minister Shinzo Abe's team hoped last year's merger of Fukuoka Financial Group and Eighteenth Bank would start a trend. In July, Bank of Yokohama and Chiba Bank entered into a tie-up to cooperate in a range of businesses

While such moves bring lenders close, it does not fix the over-banked nature of Asia's second-biggest economy. It is a concern that even Kuroda's team has been highlighting in recent years.

The Suruga affair also matters because it straddles Japan Inc.'s three biggest problems. One is poor compliance procedures at a time when companies from Nissan Motor to Mitsubishi Materials to KYB face governance scandals. Second is that the shrinking population makes profits hard to come by. Third is a deep aversion to change.

For 20 years now, Japan has been dealing with trauma from its bad-loan crisis. As regional lenders at the core of an aging nation stumble anew, so will the BOJ's effort to get inflation back to 2%.