Japan's imperial wedding drama a clash between old and new

Lingering resistance to idea that marriage is an individual choice 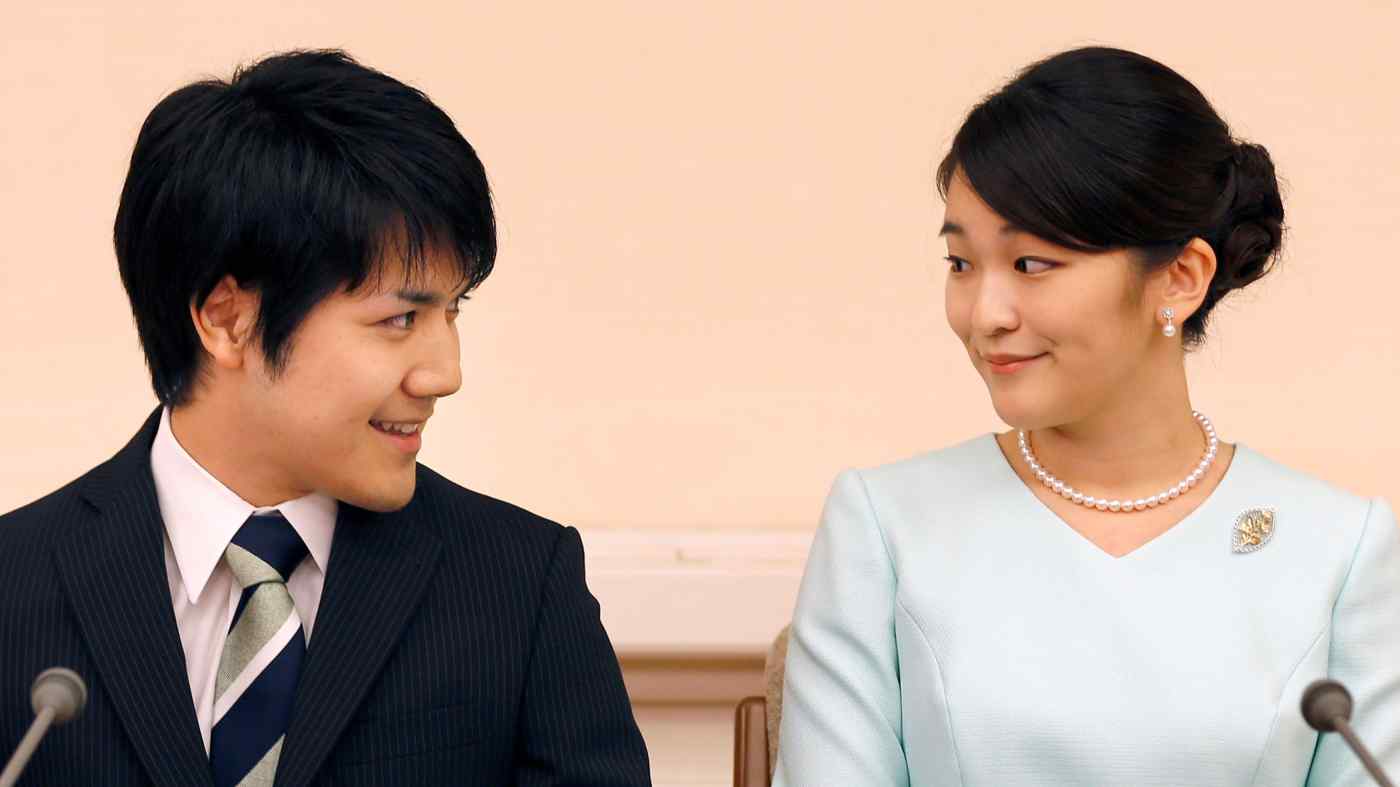 Princess Mako and her fiancee Kei Komuro smile during a press conference to announce their engagement in September 2017: Westerners inculcated with modern democratic values will wonder what the fuss is about.     © Reuters
CopyCopied

As students of the House of Windsor are all too aware, bad marriage choices and airing of the sordid details in the tabloids have done much to tarnish the dignity and aura of mystery necessary to maintain a monarchy in a modern democracy.

The controversial wedding plans of Princess Mako, 29-year-old daughter of Crown Prince Akishino and Crown Princess Kiko, and her commoner college sweetheart, Kei Komuro, and the intense media coverage thereof, however, are threatening to demystify the Imperial institution, perhaps irreparably.

Westerners inculcated with modern democratic values will wonder what the fuss is about. Soon after the princess and Komuro announced their engagement in 2017, Japanese gossip magazines began to report "financial problems" between Komuro's widowed mother and an unnamed Mr. A described as her "former fiance." Mr. A, it was reported, had "loaned" Komuro's mother 4 million yen ($36,000) back in 2010 before their engagement was terminated. Mr. A told the magazines that the "debt" had not been repaid.

Modern-minded Westerners will be surprised, and indeed offended, that a dispute over a relatively small sum between Komuro's mother and ex-boyfriend should have any bearing on her son or his wedding plans. After all, modern democratic values emphatically reject the ancient belief in collective tribal guilt, that the son is responsible for the father's sins. So, too, we have moved on from the related pre-modern notion that one must not marry outside of one's tribe, or below or above one's station.

Ah, but there's the rub. Monarchy itself is anti-democratic. It is a status handed down from father to son based on blood, not individual merit. Outside Japan, that one's intended marriage partner's parents declared personal bankruptcy or divorced is no longer an insurmountable barrier. In Japan, "good family backgrounds" still matter, especially for the older sister of a future Emperor.

Since the announcement of their engagement in 2017, Japan's gossip magazines and TV news and talk tabloid shows have fed their audiences a steady stream of information, much of it unattributed and of uncertain origin, about Komuro's family background, his mother's relationship with her ex-fiance, and their messy, still unresolved, dispute. 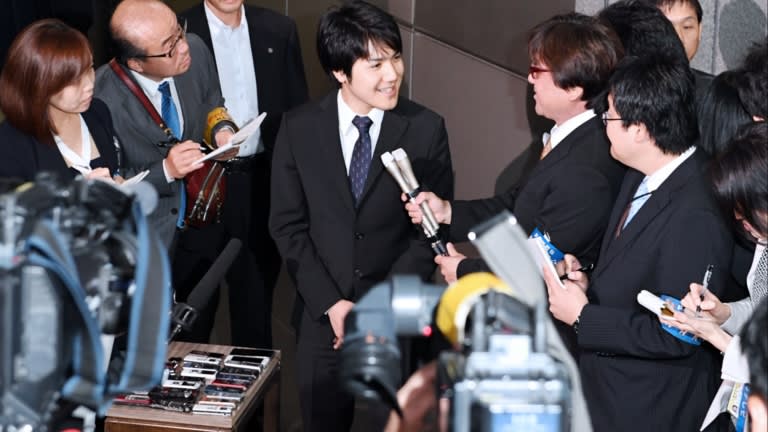 Kei Komuro speaks to media in May 2017: Japan's gossip magazines and TV news and talk tabloid shows have fed their audiences a steady stream of information. (Photo by Masayuki Terazawa)

The initial dose of information in 2017 led to the postponement of the planned wedding until the "financial problems" could be clarified and resolved. Komuro himself decamped to New York to attend Fordham Law School to earn an American law degree, presumably a credential he could use to support a family.

The Imperial household probably expected that the matter, given enough time, would blow over. But that has proved to be overly optimistic as more details emerged and a negotiated settlement of the "financial problems" between the principals proved elusive.

The curtain has now been lifted on the Komuro family, and the Japanese public does not like what it sees. True, Mr. A's refusal to come to terms and let bygones be bygones is less than admirable. At the same time, public opinion has solidified that Komuro's financially strapped mother was a less than honorable gold digger in using Mr. A. to help pay for her son's expensive private school education and other luxuries she could not afford on her own. Some are worried that the mother's methods and character may have been passed down from mother to son.

Komuro, and presumably Princess Mako, have recently indicated their resolve to press forward. In April, in anticipation of his graduation from law school and return to Japan, Komuro issued a lawyerly 28-page "explanation" of the "misunderstandings" between his mother and Mr. A, complete with 36 dense footnotes. If he thought his meandering explanation would put matters to rest, Komuro badly miscalculated.

Mr. A did not help matters by telling the gossip magazines that the "explanation" was one-sided. Komuro then proceeded to make matters worse. Having spent 28 pages explaining that Mr. A's money was a gift and not a loan, Komuro then reversed track and let it be known he was attempting to reach a negotiated settlement with Mr. A through intermediaries.

This in turn was taken by many as an act of desperation by Komuro to preserve his and Princess Mako's claim to a 140 million yen taxpayer-funded "wedding gift" customarily paid to soften the financial blow when Imperial family members leave the household to wed commoners.

The messy drama shows that it is naive to expect that modern democratic values and the ancient codes embedded in a hereditary monarchy can be easily reconciled.

If Komuro and Princess Mako plow ahead with an official wedding and the associated benefits and privileges, public opinion will strongly disapprove. Fair or not, the Imperial institution will be diminished in the public eye.

The only dignified path forward for Komuro and Princess Mako is to renounce all Imperial benefits and privileges and live their lives as ordinary Japanese citizens.