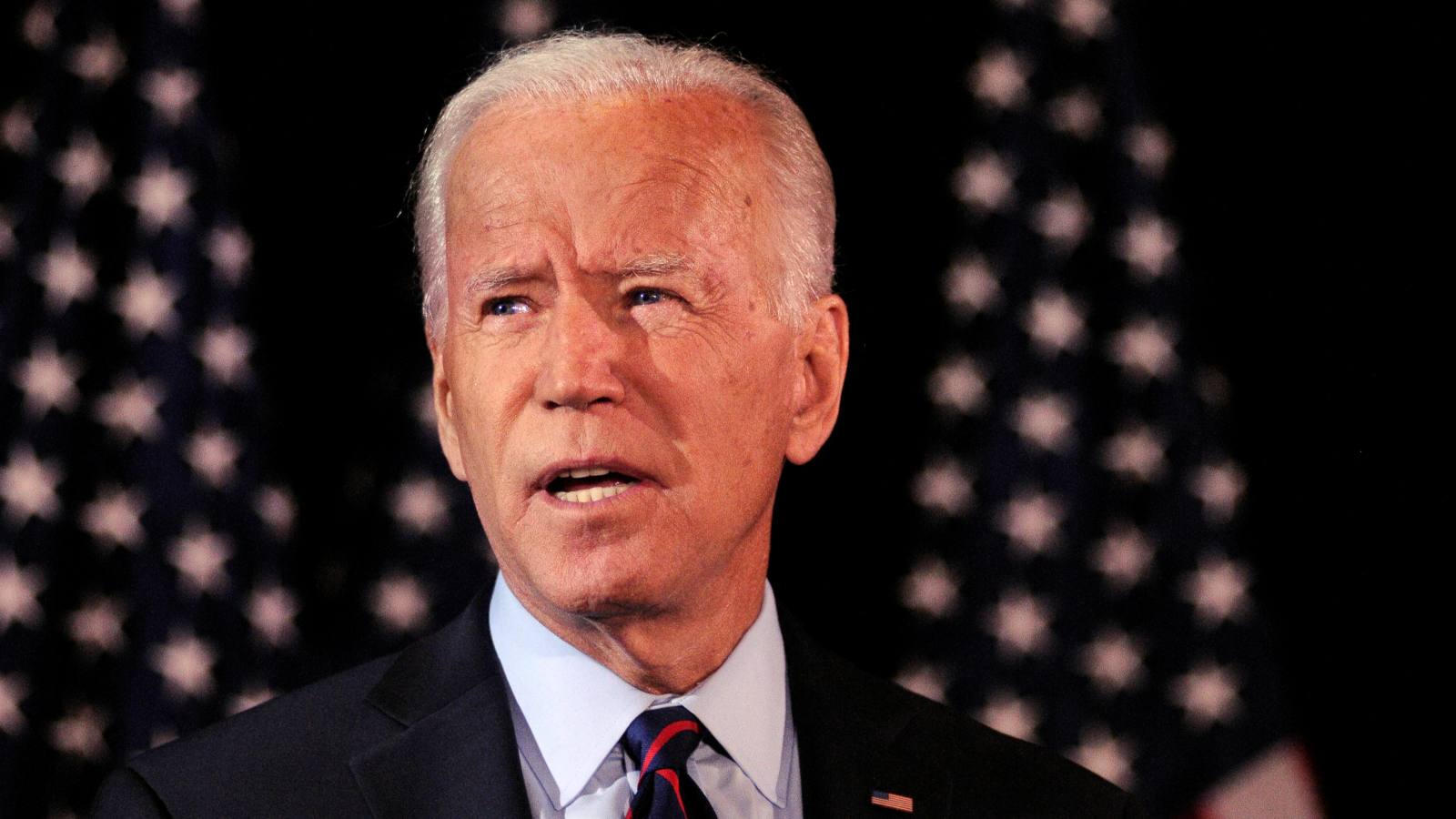 A female doctor: Japan needs more like her.
CopyCopied

On the face of it, Tokyo Medical University's scandal about discrimination against female candidates would seem to simply be a shocking case of bias against women in a country not known for equality of opportunity.

As the school has admitted, women applicants' entry exam scores were uniformly reduced to allow more male students to be admitted to a highly sought-after course.

But the truth is more complicated. While Japanese women certainly face discrimination in the medical profession, the heart of this scandal lies not in gender bias but in the woeful underfunding of Japanese health care.

The overwhelmingly male medical establishment favored male candidates over female because it saw many female health care professionals leaving their jobs, usually when starting families. Health care chiefs resorted to recruiting more men in a desperate bid to plug the gap. They would not have to do this, if more money were provided for health care for a rapidly aging population.

Ironically, the scandal has broken just as Prime Minister Shinzo Abe's government has made "female participation" in the economy a trump card of its national revitalization policy and has been campaigning for "202030" -- raising the ratio of women in decision-making positions to 30% by 2020.

In health care, the overall position might seem not too bad. Some 21% of doctors are women, according to 2016 government data. For gynecologists and obstetricians, specializations which have long attracted women, the ratio is higher -- 66% for doctors in their twenties.

However, at the decision-making levels in doctors' associations and academic bodies, the female ratio is only 2-3%. The figure for medical institutions, where paternalism is common, is not much better.

To increase the female ratio at the top, the proportion of women among all medical doctors needs to rise. The ratio of women among those passing national medical exams and so qualifying as doctors increased steadily until around 2000. We expected the ratio would reach 50% before long. But, strangely, the ratio has been stuck at around 30%. 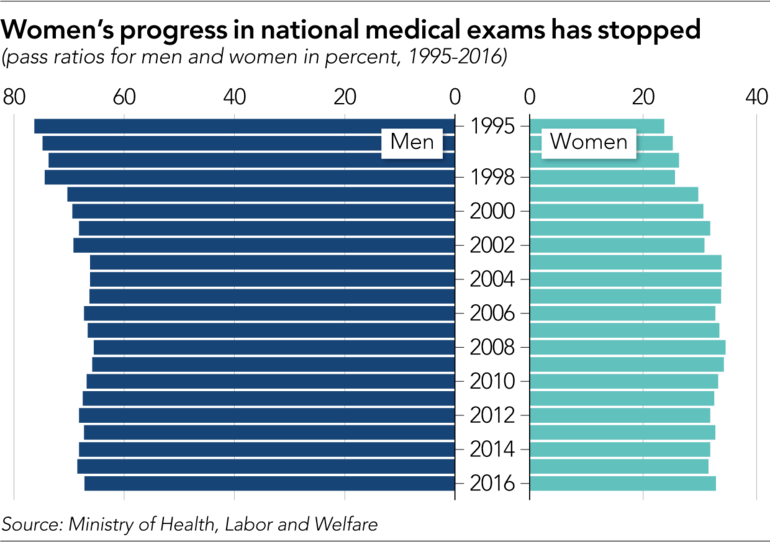 Looking at the data well before the latest scandal, I sensed some arbitrary force might be at work aiming to restrict women.

I examined the ratios of women passing medical university entrance exams and found that it was 0.86 of the men's ratio. We often hear of women not being good at science subjects such as physics and chemistry. But I established that this could not be the cause as scientific departments like engineering and pharmacy showed higher passing rates for women.

The latest scandal, which showed a university was performing a gate control at the time of entrance exams, proved my point. But this is highly frustrating. The reason cited by health care chiefs for improperly reducing women's exam scores is that female doctors are more likely to quit work due to pregnancy and child birth, and so exacerbate a shortage of doctors.

It is true that these departures increase the burden on the remaining doctors. But the root cause is a system, which keeps health care costs from skyrocketing by imposing killingly long working hours on doctors that cross the line at which karoshi -- death from overwork -- becomes a danger. On top, come unpaid standby hours.

At the hospital where I work as an obstetrician, two doctors must be on standby for any potential emergency operation. If an emergency does happen, we cannot go home for days as we must manage the case. We also need time for research to keep up with the latest technology. I once spent only 40 hours at home during a week.

I resent the authorities' turning the problem into a female doctors' issue. The government in 1982 set a target of cutting the number of students admitted to medical schools (8,370 at the time) by 10%, to cut costs. It fell 9% to a low of 7,625 in 2003. While the number crept up since, the number of doctors in Japan is a little over 200 per 100,000 people, about two-thirds the average among the members of the Organization of Economic Cooperation and Development.

Meanwhile, the country's aging is raising medical needs. Also, a higher level of informed consent is required in medical treatments than before, adding to our work.

Big hospitals with sufficient doctors can organize sensible shifts with clear "off" and "on" hours. But small institutions require doctors to be on constant alert for emergencies, and continue their regular shifts even after such emergency work including at night.

Even men often find it difficult to sacrifice their health and precious time with their families. They end working at large urban hospitals or switching to specializations without emergency treatment. So doctor shortages are unevenly distributed by region and medical field.

The current system relying on doctors who can withstand the overwork is vulnerable, both as a system of labor and in terms of medical safety. It is hard for women doctors with a child to rear to be part of this system. An organization that eliminates diversity in this way has no future.

Japan needs a national health care debate. Do we compromise on access to medical care by reducing the number of doctors on shift or do we continue to force medical professionals to overwork? With a severe doctor shortage, there is no way of ensuring that quality and access will be satisfactory. But requiring all doctors stick to the hours mandated by labor law, would require sufficient doctors to cover shifts properly - and sufficient funds. That would be a tall order. Paying people properly would strain the national medical budget. But compromising on the quality is out of the question as human lives are at stake.

The latest scandal has prompted comment from both male and female doctors. The men have complained mainly about the burden of covering for women colleagues slowing down -- if not leaving -- during pregnancy and child rearing. This shows a certain lack of awareness about working in a diverse environment.

Women's complaints are mainly about gender harassment. Just reporting the fact of a pregnancy to a boss is met by an unpleasant grimace; returning to work after giving birth, women often get relegated to unimportant positions; asking to leave work early for a sick child's care is met with a chuckle; despite performing well at work at the same time as taking care of family matters, women are not treated equally with men.

Even if health care financing is improved and excessive working hours are corrected, there remains the issue of deep-rooted gender-based harassment in the medicine. Entrance exam bias is not the only reason why women have not risen to decision-making positions in Japanese health care.

The complaints from women triggered by the latest scandal should be examined to find out what hampers the advance of women even after they have qualified. Discrimination must go. Organisations must be made completely fair. This is not only a matter of justice but a basis for improving efficiency, quality and safety in medicine. Kyoko Tanebe is an obstetrician and an executive board member at the Japan Joint Association of Medical Professional Women.