Yoshihide Suga's priorities are as incremental as they are vague Suga must roll up his sleeves and go big.   © AP
CopyCopied

In the COVID-19 era, billions of people around the world wonder what leaders are doing to contain the economic fallout. For the Japanese, though, it is less about what than where.

Questions concerning the whereabouts of newish Prime Minister Yoshihide Suga abound as Asia's No. 2 economy staggers toward 2021. Early talk of newly assertive stimulus moves went quiet. So has chatter about his 54-day-old government putting some quick and notable reform or diplomatic wins on the scoreboard.

One common explanation for Suga's disappearing act is a scandal grabbing national headlines. Controversy over Suga barring a number of professors from the Science Council of Japan will sound insignificant to those abroad. It reminds voters, though, of the myriad scandals under his predecessor Shinzo Abe, who Suga served for nearly eight years as chief cabinet secretary.

There are two important takeaways from this low-visibility start. First, Suga is likely to be a short-timer, just like the six governments that came and went in a blur before Abe's 2012-2020 stint. Second, and most importantly, Suga seems destined to get little done to reorder an aging, rigid economy.

Granted, it is still early days. But Suga's priorities so far are as incremental as they are vague. Talk of reducing mobile-phone bills, digitalizing the government, support for fertility treatments and being carbon-neutral by 2050 sounds nice.

These plans lack audacity, though, as China invests trillions in dominating virtually every economic sector by 2025. And as developing Indonesia beats Japan in the tech unicorn race. Suga's pledges to continue a structural reform program Abe that could not get done with 2,821 days in power do not sound very promising either.

If Suga is going to shift the economy into higher gear, there is not a moment to waste. Here are three ways Suganomics can avoid being the punchline Abenomics has become.

One: telegraph a big bang, and fast. Suga missed an early and obvious opportunity by sticking with 80-year-old Taro Aso as finance minister. The same with keeping the rather low energy Hiroshige Seko as minister of economy, trade and industry. Naming a woman to one of these key posts -- something Abe would not do -- might have signaled change is coming to patriarchy.

Even so, Suga should empower his team to present a timeline for expedited moves to loosen labor markets, reduce bureaucracy, empower women, alter tax incentives away from giant exporters and revive the innovative spirit that China's Xi Jinping is working to instill in the 1.4 billion-person economy next door.

This cannot be mere talk. There must be clear and ambitious timelines for regulators and lawmakers to shake up Japan Inc. Since 2012, Tokyo has relied on stimulus sugar highs, while promising epochal change that never arrived. To beat this reformists-who-cried-wolf rap, Suga must roll up his sleeves and go big.

Two: lean hard into startups. Suga's 2050 carbon goal is the perfect place to focus. He can start by setting 2030 as Tokyo's target for renewables replacing fossil fuels and rolling out an ambitious incentive structure.

Forget the reactors. Nine years after Fukushima produced the worst nuclear crisis since Chernobyl, voters hanker for a less nuclear future. Suga can jump-start things with tax incentives for startups inventing cleaner, safer and cheaper ways to power cities, cars, airplanes, ships, homes, you name it. If this means government-funded venture capital mechanisms, so be it.

Suga should stop taking calls from the "nuclear village." His Liberal Democratic Party has long been betrothed to this nexus of pro-atomic-power lawmakers, companies and academics warping Tokyo's priorities. Renewable energy is the growth industry of the future, one Japan is uniquely qualified to lead. 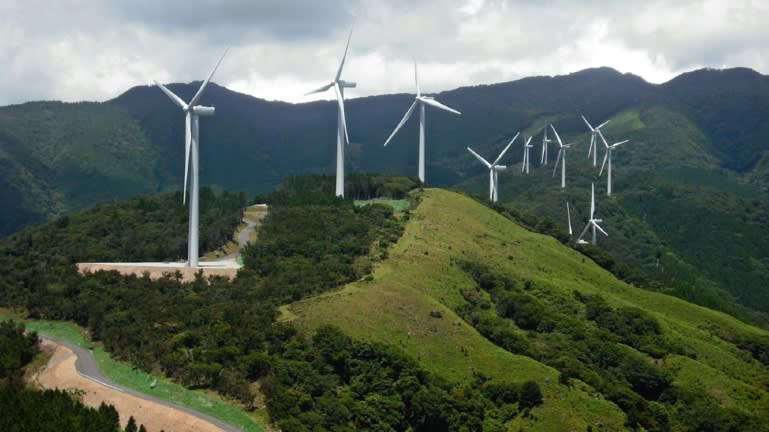 Tepco's Higashi Izu wind power station: renewable energy is the growth industry of the future, one Japan is uniquely qualified to lead. (Photo provided by Tepco)

No industry holds greater promise than inventing ways for China, India and Indonesia to develop without choking on rapid growth. By setting Japan up as the leading powerhouse in batteries, solar, wind, geothermal and other renewables, Suga would be remembered as Japan's greatest reformer in many decades.

Three: turbocharge the Bank of Japan. Since 2013, BOJ Governor Haruhiko Kuroda has been cornering the bond and stock markets and buying up the gamut of financial assets to pump money into a deflation-plagued economy. Yet, consumer prices never got remotely near the 2% target.

COVID-19 fallout is putting the BOJ back to square one. Suga can turn things around by giving Kuroda new marching orders. Deflation is a symptom of Japan's malaise, not a cause. Why not have the BOJ target 2% wage gains? Or a 2 percentage-point rise in annual gross domestic product?

This pivot forces the government to act, too. Abe's biggest mistake was betting it all on aggressive BOJ easing, figuring that would be enough to revive Japan's animal spirits. Along with a burst of reformist activity, Suga could empower the BOJ to start making regular cash payments directly to households. It could deposit allotments of, say, 100,000 yen ($965) that won't be replenished unless the full amount is spent.

Tokyo is responding too conventionally to highly unconventional problems. All Suga needs to do is show up and display some political courage. If not, voters will start searching for the next short-timer in the prime minister's office.