Suga presents Abe with flowers on Sep. 14: Suga has one big thing in his favor when it comes to South Korea. He's not Abe. (Photo by Uichiro Kasai)
CopyCopied

Kathryn Botto is an Asia program research analyst at the Carnegie Endowment for International Peace.

When it comes to Japan's fraught relationship with South Korea, new Prime Minister Yoshihide Suga would do well not to follow in Shinzo Abe's footsteps.

Over the past two years, Abe and South Korean President Moon Jae-in allowed the bilateral relationship to spiral to its lowest point in decades.

Improving relations with Seoul will require a proactive effort to settle recent disputes, and separate complex historical issues from economic and security cooperation. Suga has a narrow opportunity to accomplish this, but a lack of political will and vision may mean another year of deep freeze.

The current difficulties began in 2018 when South Korea's Supreme Court ordered two Japanese companies to compensate a small group of laborers forced to work for their companies during World War II, drawing strong criticism from the Abe administration.

As the legal battle over forced labor victims escalated, in August last year Japan removed South Korea from its list of preferred trade partners, tenuously citing a loss of trust in the relationship and vague national security concerns over South Korean exports of sensitive materials for its decision. South Korea responded by removing Japan from its own trade whitelist, and threatened to withdraw from the General Security of Military Information Agreement (GSOMIA), an important intelligence-sharing pact.

Given that Japan's wartime behavior has been a constant source of friction between the two countries, the dispute over another historical issue was nothing new. But the extent of the punitive economic and security measures that followed was unprecedented.

Even though unresolved historical issues have long been a cause of tension -- and hostile political rhetoric -- Japan and South Korea have still managed to substantially improve bilateral cooperation over the years. South Korea has become one of Japan's closest and most important economic and security partners, with the two countries' shared interest in regional peace and stability, and respective alliances with the U.S., boosting cooperation.

As Suga consolidates his power, he must move to minimize uncertainty, and repair relations with Seoul to mitigate an important source of volatility. Suga cannot expect to dissolve South Korea's grievances against Japan, but he can strive to separate history from economic and security issues. As recent decades have shown, Japan and South Korea can work together, even if they disagree over how Japan can make amends for the suffering it caused during the war. Relegating these issues to quieter and separate diplomatic channels would help.

While the timing of Suga's election puts him in a difficult position, he does have one big thing in his favor when it comes to South Korea: he's not Abe. For all its ups and downs, the most consistent aspect of South Korea-Japan relations over the past seven years has been South Koreans' dislike of the former Japanese leader.

Unfortunately, there is little to suggest that Suga will work to proactively improve the relationship with South Korea. More of a policy wonk than an ideologue, he has a more pragmatic streak. But with little diplomatic experience or a clear vision for Japan's security and foreign policy, Suga is likely to defer to the precedent set by Abe.

Seen by many as an interim leader, unless Suga can quickly produce meaningful results, he is unlikely to stay in the job for long. Working within such a short time frame, and with a host of other issues including the pandemic, a struggling economy, escalating U.S.-China tensions, and the U.S. election outcome in November, all competing for his attention, South Korea is unlikely to be his top priority.

That puts the onus on Moon to work to improve relations. Moon may see Suga's election as an opportunity, but he may also lack the political will and flexibility to change much as some of their disagreements remain intractable. Just this summer, stalled trade talks led South Korea to reopen a World Trade Organization complaint over Tokyo's export controls. 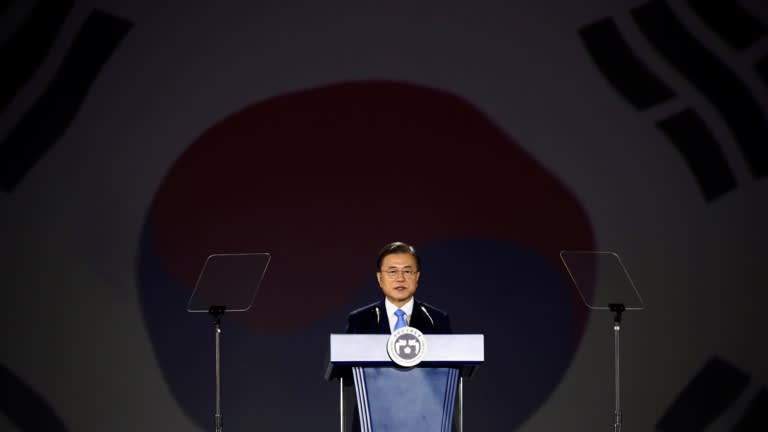 Moon appears to lack the political will and flexibility to change much either.   © Reuters

At least in terms of security cooperation, there are signs of improvement. Last month, South Korea quietly allowed the renewal of the GSOMIA, the intelligence agreement it threatened to terminate last year, for another year. Automatically renewed each November unless either side gives 90 days' notice of termination, South Korea's decision to let the deadline pass without fanfare suggests that it's not interested in using the agreement as leverage, at least for now.

Even if Suga is inclined to pursue a more stable and cooperative relationship with South Korea, it's difficult to predict where Japan-South Korea ties will be when his term ends. Suga's chances of a second term are slim, and South Korea will elect a new president in 2022.

Before Abe began his second stint as prime minister in 2012, Japan had gone through six prime ministers in six years. With new leaders in 2022, and the potential for a return to a cycle of short-term leaders in Japan, it will be difficult for Suga or Moon to set a long-term precedent for the relationship.

However, given the severity of the threat from North Korea and concerns over COVID-19, even a temporary improvement in relations would go a long way toward enhancing stability in Northeast Asia.