Japan's next leader must keep Russia at a distance Vladimir Putin speaks at the Eastern Economic Forum in Vladivostok on Sept. 3: Suga's nonattendance was representative of his low-key approach to Russia.   © Reuters
CopyCopied

Prime Minister Yoshihide Suga's restrained attitude toward Russia marked a stark contrast with the hyperactive engagement of his predecessor, Shinzo Abe. As Suga now heads for the exit, Japan's next prime minister will have a choice of models to follow. Suga's sober approach has more to recommend it.

Russia's Eastern Economic Forum, held annually in Vladivostok, symbolized Prime Minister Abe's dedication to improving relations with Japan's northern neighbor. Abe attended every year between 2016 and 2019 and made speeches in which he promised economic cooperation and gushed about the "unlimited potential" of Japan-Russia relations.

Abe's visits to Vladivostok were also an opportunity to intensify his courtship of President Vladimir Putin, whom the Japanese leader met 27 times in total and described as a man who is "dear to me as a partner."

By contrast, when the latest iteration of the Eastern Economic Forum was held last week, Prime Minister Suga was notably absent. He did not even join online or contribute a video message.

Part of this was due to Suga's collapsing political fortunes, which led to the announcement that he would be stepping down as prime minister. However, Suga's nonattendance was also representative of his consistently low-key approach to Russia.

After replacing Abe as prime minister in September 2020, Suga did not hold a single meeting with Putin. In his yearlong premiership, there was also only one phone call. Moreover, with respect to the countries' territorial dispute over the Russian-held Southern Kuril Islands, which are claimed by Japanese as its Northern Territories, while Abe showed a willingness to accept the return of just two islands, Suga reverted to Japan's traditional emphasis on all four.

This is not to say that the Suga administration entirely cut ties. Indeed, at this year's Eastern Economic Forum, the Japanese and Russian governments signed an agreement on deepening cooperation in the areas of renewable energy, hydrogen, ammonia, and carbon capture and storage.

This forms part of Japan's plans to achieve net-zero greenhouse gas emissions by 2050. The Japan Aerospace Exploration Agency and the Russian Federal Space Agency also signed an agreement on cooperating on the Spektr-UF project, a space telescope that Russia plans to launch in 2025.

The difference is therefore between idealism and pragmatism. Abe dreamed of being the Japanese leader to finally sign a peace treaty with Russia and thereby put a conclusive end to the second world war. He told his audience in Vladivostok in 2019 that, "Virtually the next instant, the connection between Japan and Russia will change the region. It will begin to change the world significantly." 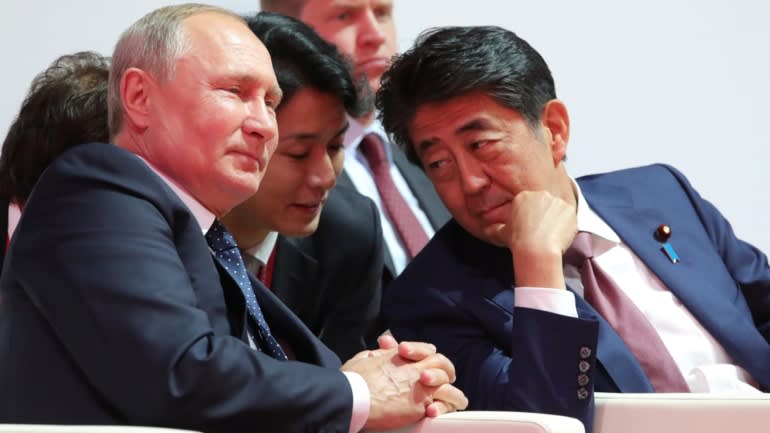 Vladimir Putin speaks to Shinzo Abe as they attend a judo tournament on the sidelines of the Eastern Economic Forum in September 2019: Abe dreamed of being the Japanese leader to finally sign a peace treaty with Russia.   © Kremlin/Reuters

By contrast, Suga did not consider relations with Russia a top priority and saw little to be gained through active engagement. Instead of running desperately after a territorial deal that continued to recede ever further into the distance, Suga opted not to even try. Engagement was therefore restricted to those areas such as energy in which Japan can make concrete gains.

It is true that there were no great achievements in Suga's Russia policy, yet this is still preferable to Abe's negative legacy. By fawning over Putin and offering concessions on the territorial issue without reciprocity, Abe showed Japan to be a soft touch, even on matters of national sovereignty.

Abe's reluctance to criticize Putin, even after the Russian intelligence services were accused in 2018 of using a chemical weapon in an assassination attempt in the U.K., also undermined Group of Seven solidarity and raised questions about Japan's reliability as a security partner.

Ultimately this friendly attitude toward Putin was shown to count for nothing when the Russian leader humiliated Abe by introducing changes to Russia's constitution in 2020 that banned territorial concessions. This punctured Abe's inflated ambitions of securing the return of at least some of the disputed islands.

The identity of Japan's next prime minister remains unclear, yet, whoever it may be, they will have a clear choice between the Russia policies pursued by their predecessors. The wiser option is Suga's pragmatic approach.

Better still, Japan's next leader could reinforce Japan's position by adopting the following guidelines. First, cooperate with Russia when beneficial in its own right, and not as a down payment toward some hoped-for resolution of the territorial dispute. Second, demand reciprocity for all diplomatic concessions. And third, do not permit Russia to use peace treaty talks to drive a wedge between Japan and its Western allies.

This will not lead to a resolution of the territorial dispute. Nothing Japan can do will achieve this. However, such an approach will ensure that Japan-Russia relations retain the equilibrium that they had lost under Abe's leadership.

Suga will not go down in history as a successful prime minister, yet, in the area of Russia policy, his approach still represents a better model than that of Abe.