Japan's ruling coalition is not as secure as it looks A large screen shows live broadcast of Yoshihide Suga as he holds a news conference on June 17: the LDP will have to decide whether Suga is still the right person for the job.   © AP
CopyCopied

Yoshihide Suga may have just had the worst stretch of his brief tenure as Japan's prime minister.

On July 4, the ruling Liberal Democratic Party not only fell short of a majority in the Tokyo metropolitan elections, it actually delivered one of its worst results ever.

Meanwhile, a spike in COVID-19 cases in the capital forced another state of emergency -- the fourth since the pandemic began -- that will remain in effect through Aug. 22, ensuring that the Olympics will be held without spectators.

Then, on July 11, the latest poll from national broadcaster NHK showed that Suga's approval rating had fallen to 33%, the lowest since he took office in September.

Finally, amid a backlash from industry groups, Suga was forced to apologize and retract a policy instructing liquor wholesalers not to sell to restaurants and bars that failed to comply with orders under the new state of emergency. Yasutoshi Nishimura, the minister responsible for the government's COVID response, is now under pressure to resign.

This has been an inauspicious beginning to the informal start to Japan's general election season, where a House of Representatives election must take place no later than Nov. 28.

On the surface, widespread public discontent with Suga and the LDP-led government, particularly their handling of the pandemic and the ill-starred Tokyo Games, may not make much difference. The LDP continues to benefit from the conditions that enabled former Prime Minister Shinzo Abe to lead the ruling coalition to six consecutive electoral victories.

The opposition, led by the Constitutional Democratic Party (CDP), has been unable to capitalize upon the public's dissatisfaction to bolster its own support. While voters may have their doubts about LDP rule, they do not trust the opposition to perform any better at managing domestic challenges or keeping Japan safe in an increasingly dangerous neighborhood.

With its two-thirds supermajority in the 465-seat lower house, the LDP is in an almost impregnable position and a change of government is unlikely. Yet there are signs that this year's general election could mark the start of a new, more competitive political system after years of one strong, many weak politics.

The LDP itself is less united than it had been under Abe's leadership, with the struggle between Secretary-General Toshihiro Nikai, whose faction is the party's fourth-largest, and the larger Aso and Hosoda factions playing out in a growing number of electoral districts, including seats vacated by retiring lawmakers, where candidates backed by rival groups could even face off in the general election.

The Hosoda faction, the party's largest, has its own divisions as it struggles to overcome a post-Abe identity crisis as it debates whether to put forth a new party leader or remain the power behind the throne. 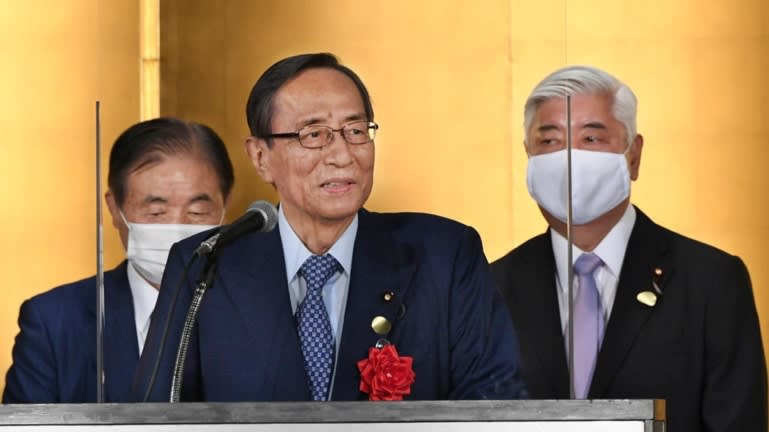 Hiroyuki Hosoda speaks as a guest at a fundraising party in Tokyo on June 29: the Hosoda faction has its own divisions as it struggles to overcome a post-Abe identity crisis. (Photo by Kosuke Imamura)

Underlying these power struggles is what appears to be a clash of vision for the post-Abe LDP as a whole: Should the party be more pragmatic -- especially when it comes to Japan's relationship with China -- or should it be a vehicle for Abe's muscular conservatism? Suga's weakness has served to exacerbate these divisions as party leaders jockey for position lest the post-Suga era begins sooner rather than later.

While the opposition is far behind in the polls, it is quietly laying the groundwork for a more effective campaign against the ruling coalition than in previous elections. The most significant change is that unlike in 2017, when the splintering of the Democratic Party led to opposition candidates cannibalizing the non-LDP vote, the main opposition parties appear to be coordinating their candidates more effectively.

Against this backdrop, the LDP will have to decide whether Suga, whose term as leader ends in September, is still the right person for the job. His vulnerabilities notwithstanding, the LDP may be reluctant to replace a sitting prime minister on the brink of an election, as without an obvious successor, an open leadership election could deepen the party's divisions.

The LDP may have little choice but to hope that the government will be able to contain the pandemic and declare its inoculation drive a success in time for the vote. Even if Suga manages to hold onto the leadership, he will still be fighting for his political life in the general election. If the CDP and its allies make significant gains at the LDP's expense, Suga's days will be numbered.

Suga could still cling to power after such a setback, but it would be at the head of a dispirited, divided LDP, with a dissatisfied and potentially more powerful coalition partner in Komeito, and facing an emboldened opposition that will immediately be looking to upper house elections in 2022 to further erode the LDP's position.

Do not look now, but Japan could be in for its most unpredictable -- and consequential -- election season in more than a decade.