Japan should eliminate the influence of gaffe-prone Mori

Public will suffer unfairly if status quo is allowed to continue Yoshiro Mori attends a news conference after a telephone meeting with IOC President Thomas Bach in Tokyo in March 2020: the question of leadership is drawing attention.   © Reuters
CopyCopied

Controversy continues over the derogatory remarks about women made last week by Tokyo Olympic and Paralympic organizing committee president Yoshiro Mori, who said that "board meetings with many women directors go on for a long time."

The comments violated the spirit of the Olympics, with the committee and Mori issuing an immediate apology in a bid to put a quick end to the furor. It comes as no surprise, then, that questions have been raised at home and abroad about what prompted Mori, who served as prime minister from 2000 to 2001, to make such a remark and why the committee has not relieved him of his post.

To many Japanese, the remark appears to be yet another ill-advised remark by the gaffe-prone Mori, such as when he said of figure skating star Mao Asada that "that girl always falls over whenever it's important," after she finished 16th place in her short program at the 2014 Sochi Winter Olympics.

When Mori was the chairman of the ruling Liberal Democratic Party's committee to address Japan's declining birthrate in 2003, he said during a panel discussion that it was "really strange to argue that tax money should be used to take care of aged women who never even bore one child and lived an unencumbered life."

Mori's best-known verbal blunder came during a celebration of parliamentarians promoting Shinto beliefs in 2000, when, as prime minister, he said that "everyone should firmly recognize that Japan is a divine nation centered on the Emperor."

News media criticized the statement for being in violation of Japan's post-World War II constitution in which the emperor is defined as the symbol of the state, not a divine being.

After Komeito, the LDP's coalition partner backed by a lay Buddhist organization, joined opposition parties in criticizing Mori for breaching this principle of secular politics, Mori lost a no-confidence motion in the House of Representatives, and the LDP lost many seats in the subsequent elections.

It also should be noted that Mori's selection as prime minister came through backroom politicking. Following the sudden illness of then-Prime Minister Keizo Obuchi, LDP leaders held a behind-the-scenes meeting and decided to allow Mori to succeed the highly popular Obuchi. That partly explains how someone capable of repeatedly making such sexist comments about women could rise to the top.

The approval rating of the Mori cabinet was low from the start, but plunged to record lows due to his numerous gaffes. The newspaper Asahi Shimbun's approval poll in February 2001 found him at 9%, the lowest for a prime minister since the 1990s. Even today, people have a poor view of Mori.

Meanwhile, Mori is a kingpin in the world of sports. He assumed the chairmanship of the Japan Sports Association in 2005, becoming the first former prime minister to take the post. Enthusiastic about rugby, which he played at high school and university, Mori successfully led Japan's 2008 bid to host the 2019 Rugby World Cup.

After the onset of the COVID-19 pandemic last year, then-Prime Minister Shinzo Abe reportedly discussed with Mori whether the 2020 Olympics should be postponed for one year or two. As one of the few leaders who can directly talk with President Thomas Bach of the International Olympic Committee, Mori served as a de facto bridge between Japanese and overseas officials. 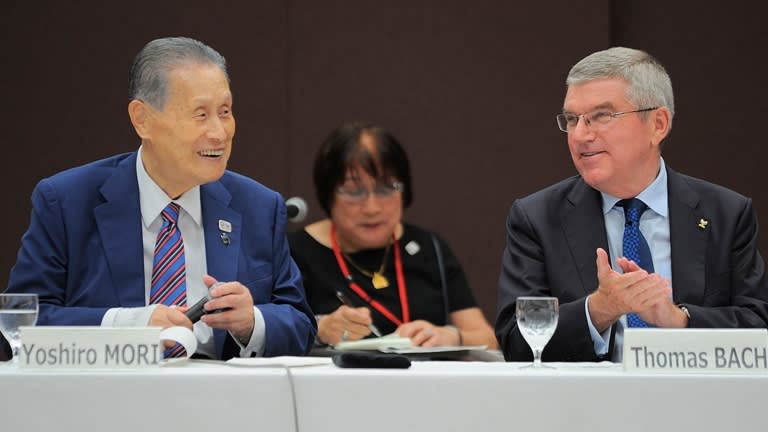 Mori's hold over the Olympics has contributed to the growth of special-interest politics in Japan. Since Japan's successful 2013 bid to host the Olympics, five of the six ministers for education, culture, sports, science and technology have come from an intra-LDP faction dominated by Mori and Abe. This has aroused suspicions that the Mori faction has increased vested political interests in the Olympics and the sports-related sector. But given Mori's experience of international lobbying activities as a former prime minister, many feel that he cannot be replaced.

During talks with reporters following his apology on Feb. 5, Mori reportedly said, "I'm really not that attached to the presidency [of the organizing committee] and decided to quit. But I changed my mind because of urging by committee members such as Director-General Toshiro Muto."

If this is true, the committee's intent to carry on with the Olympics under the Mori-centered convoy-style management should be questioned, and the former primer should be held accountable for his sexist remark.

In short, the organizing committee and the Japan Olympic Committee with Mori at the helm represent unhealthy, old-fashioned Japanese politics, which are characterized by special interests and cronyism.

"Definitely going to corner this guy at the breakfast buffet. See ya in Tokyo," tweeted Hayley Wickenheiser, a Canadian IOC member who played women's ice hockey for Canada. If the Tokyo Olympics becomes a target of ridicule and accusations from the international community, Japan will end up sponsoring an ill-conceived tragic drama.

Now that the question of leadership is drawing more attention amid the pandemic, a fresh view of selecting the organizing committee should be examined due to the absence of an alternative to Mori. It would be best to choose a new leader and spokesperson while keeping Mori in the background.

The same tragedy will be repeated without fundamental countermeasures such as increasing board members in the organizing committee who are not under Mori's political influence and do not share his values, including his dim views of women. In such a case, the leading character of another tragedy will not necessarily be Mori.

The revelation of Japan in the international community as a society tolerant of social gaffes will force losses on the Japanese public that amount to much more than any gains from special interest groups.