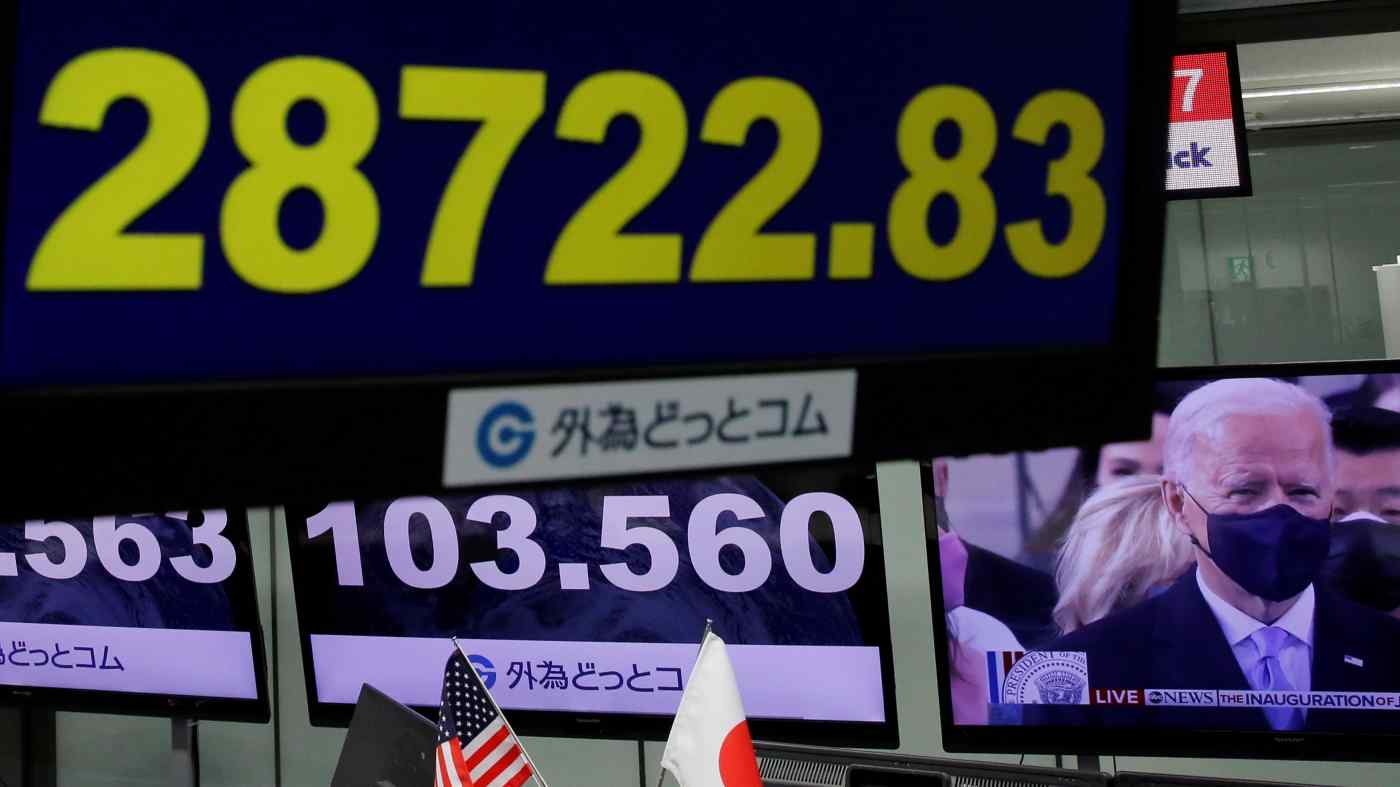 A monitor shows Nikkei Stock Average at a dealing room in Tokyo on Jan. 21: there is a financial funhouse mirror at play.   © Reuters
CopyCopied

By at least one measure, Yoshihide Suga's 141-day premiership has been a roaring success: a stock rally capturing global attention.

You would never know, eyeing the Nikkei Stock Average's 21% surge since mid-September, that deflation is returning. Or that a COVID-19 third wave imperils the expected boost from a Tokyo Olympics on life support. Or that Suga seems oddly AWOL as Japan's 2021 challenges mount, a crouch that has his approval ratings falling faster than stocks rise.

It is not all irrational exuberance. The Tokyo market is heavily dominated by cyclical names at a moment when central banks are pumping tidal waves of cash into financial systems.

Tokyo's valuations, meantime, seem reasonable compared to global counterparts. For all Suga's troubles, Tokyo exudes stability relative to the U.S., Europe and even a China that cannot decide whether to champion tech innovators or squash them. In Tokyo, the GameStop fiasco is a wacky news story to follow, not a direct threat to portfolios.

There comes a point with any stock rally, though, when the proverbial rubber must hit the road. Or when Wile E. Coyote risks plunging to earth.

Admittedly, the classic Looney Tunes character has long since veered into cliche territory as a market-mania metaphor. But as 2021 unfolds, Tokyo valuations really do face a financial gravity problem.

Investing is a relative-value game. Often, it is a kind of economic beauty pageant in reverse. Through this pandemic-warped lens, aging and heavily indebted Japan is among the least ugly options.

Except when you consider how external events are devolving, complicating Suga's 2021 with each passing day. In one sense, the still newish Liberal Democratic Party leader is extremely fortunate. The pandemic did what nearly eight years under predecessor Shinzo Abe did not: drive the Nikkei to the highest since 1990.

1964, the last time Tokyo staged an Olympics, is seared into memories as a modern Japanese high point; 1990 is a traumatic one. That was around the time the 1980s bubble economy went awry. It is the reckoning from which Tokyo is, in many ways, still trying to extricate itself.

There is, of course, a financial funhouse mirror at play here. The Dow Jones Industrial Average did not race to a record high, Road Runner-like, last month because the U.S. economy looks great. It is being propelled by a Federal Reserve blasting liquidity into world markets already overflowing with it. Some of it is rushing Tokyo's way, flowing into oceans of Bank of Japan cash.

The good news: Suga has it in his power to narrow the gap between the road investors are on and the economic reality beneath. The bad news: the drop in his own market capitalization -- his poll numbers -- means Suga must start running faster.

No doubt, the coronavirus has been the economic equivalent of an anvil hovering over the LDP's head. Suga, though, has fallen well behind early pledges to reanimate former Prime Minister Abe's structural reform plan. And to write some of his own upgrades into the 2021 narrative.

Suganomics, as defined so far, aims to augment Abe-era plans to loosen labor markets, increase innovation and support a startup boom with moves to digitalize government and modernize the regional bank sector. The clock is ticking, though, with Suga's support rates as low as 33% according to an Asahi Shimbun survey.

To validate the Nikkei's bull run, Suga should act more boldly to defeat COVID-19. China, South Korea and Taiwan prove that halting community spread is a non-negotiable part of the recovery process. Tokyo has fallen into counterproductive short-termism on the virus -- hitting the brakes when infections spike and easing up when they slow. 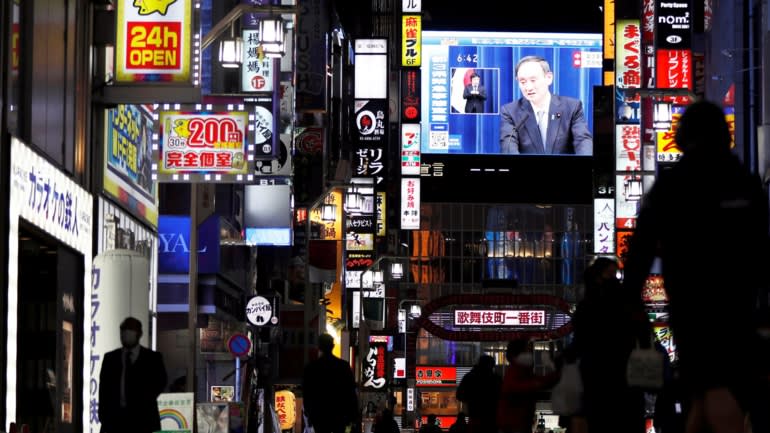 A large screen shows Yoshihide Suga declaring a state of emergency on Jan. 7: Tokyo has fallen into counterproductive short-termism on the virus.   © Reuters

Unless Suga gets serious, this cycle could be Japan's experience for years to come. This strategy will prove particularly flawed if new COVID-19 variants render less effective the vaccines Japan has been slow to deploy anyway.

This latter challenge, one of which Suga has barely talked, would help the Nikkei maintain recent heights. It would make the 27% 12-month return appear less frothy. It would buttress arguments that Tokyo stocks are right to trade at average price-to-earnings ratios of 39, compared with 27 times in New York and 30 times in Seoul.

Suga also needs to prove he will be around in eight months when Japan's election is presumably held. He will not be if he prioritizes the Tokyo Olympics, with about 80% of Japanese harboring deep doubts over where the economy will head in 2022 according to a Kyodo News poll.

The risk is that investors plowing into Tokyo shares suddenly realize Suganomics is not paving the way toward a more vibrant and prosperous future. Suga has it in his power to cheer investors. If he does not use it, it could be a long way down.