Japanese automakers face their own Brexit with the past

Honda Motor's decision to hightail it out of Britain says as much about the company as about the U.K., and the mess that is Brexit.

The smallest of Japan's Big Three automakers -- and with the smallest U.K. operation -- it faced the greatest pressure to retreat from an uncertain location and had the least to lose.

But, Honda's move is still a clear message to Prime Minister Theresa May. It comes just after Nissan Motor ditched plans to make its X-Trail SUV in Britain and just before Toyota Motor warned it would be difficult to produce new models in the U.K. in the event of a no-deal Brexit.

These companies have long been the vanguard of Japanese quality and the nation's global ambitions.

It was always a signal compliment that Japan's Big Three trusted the U.K. with their brand: trusted products from a trusted workforce in a trusted nation.

London's chaotic detour out of the EU threatens to change all that, as the folks of Swindon, 110 kilometers west of London, are learning the hard way. Honda's exit will deprive the manufacturing city of 3,500 well-paid jobs by 2022.

Swindon produced most of the Great Western Railway's steam locomotives. It assembled the Spitfire fighter plane that helped defeat the Nazis. It features low unemployment and comfortable living standards.

So it is an excellent example of the mystery of the June 2016 Brexit vote. About 55% of Swindon residents opted to leave the European Union. Why would people benefiting from globalization, from Britain's gateway-to-the-EU status, vote against their economic interests? Why would they, in effect, slap Honda in the face?

May's government could yet find a way to negotiate a deal that eases the pain for foreign companies. Another referendum might yet save the day. But a no-deal Brexit also could also emerge, leaving Japan's Big Three with a 10% duty on cars sent to the EU. 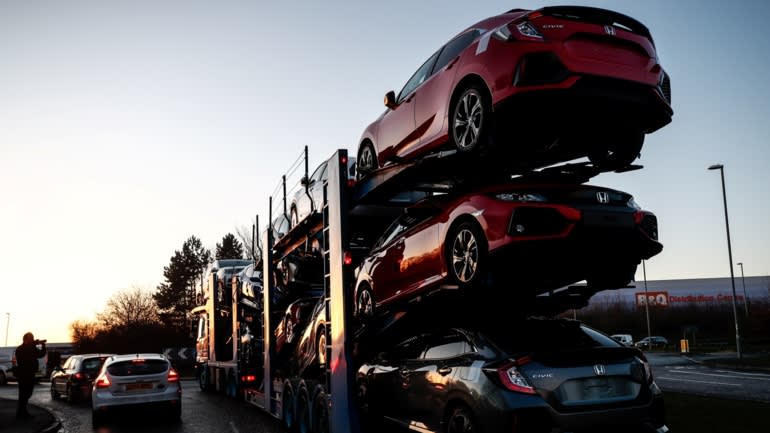 "The central reason Japanese automakers decided to set up base camps in the U.K. during the 1990s was to forge a path of least resistance into European market," says Michael Dunne, CEO of auto adviser ZoZoGo. "With Brexit, that rationale gets tossed out the window."

So does brand U.K., especially as long-term investors such as Japanese automakers are concerned. Once they are forced to consider options and find a better alternative, they stick with it.

But if Swindon's Honda crisis is emblematic of Brexit, it is also a microcosm of the difficult road ahead for Japan's carmakers.

All this comes as Japan Inc. sits at a crossroads. Given normal trade conditions, companies might adapt to Brexit (as Toyota, for the moment, is trying to do). But these are anything but normal times. It is wise to reduce any risk within your control.

Donald Trump's trade war only added to the post-Brexit disorientation. The U.S. president's tariffs on steel (25%) and aluminum (10%) raised costs. His taxes on $250 billion of Chinese goods slammed the supply chains on which Honda, Toyota and Nissan rely. His threats to slap 25% levies on cars and auto parts is a modern-day "sword of Damocles" hanging over the industry.

Moreover, time is not on the makers' side. They face myriad decisions. How much emphasis to put on electric vehicles -- and how to deploy research-and-development budgets accordingly?

Whither self-driving vehicles? Even if the technology is sound, can governments keep pace to enact laws and devise practices and standards which allow investments pay off?

Information technology raises other prickly issues. From Detroit to Nagoya, executives face a disrupt-or-be-disrupted quandary. Software, for example, is already a key differentiator undermining the traditional competencies, on which automakers long thrived. When the internal combustion engine is no longer at the heart of the vehicle, technology giants can leapfrog over the majors.

Passenger cars are no longer complete when the customer picks up the keys. To maintain competitive edge, Honda, Nissan and Toyota must harness data to upgrade vehicles long after they are driven off the lot.

The challenge is managing the reams of incoming customer data to know when, and how, to change course. And to do it before Google, Apple, Uber and other fast-moving tech groups.

Silicon Valley sees autos as a means of returning to its pioneering days. Wisely, Japan's auto giants have set up outposts around San Francisco -- Honda Research Institute, Nissan Research Center and Toyota InfoTechnology Center. Another sign of the times: Toyota's new joint venture with Panasonic to raise its game in electric vehicle batteries.

China's rapid emergence as competitor and innovator -- including in artificial intelligence -- has Japan checking the rear view mirror. So do the whims of millennials, who see car ownership as anachronistic. Wowing the Uber generation with battery-powered cars that are essentially mobile computers might be just the thing -- but who will find precisely the right model?

That means that global factory networks that Japanese automakers and their rivals have developed may prove redundant, or at least oversized. Electric vehicle assembly is a different challenge from traditional vehicle manufacturing, requiring fewer operations, and so fewer workers and machines.

So from now on, the auto groups will be pruning their traditional networks -- and building new ones. Like it or not, that requires reviewing existing locations.

Also factories have been sited in key markets, to please customers and governments. But decisions made 30 years ago, for example, to favor Europe, look different now that the region accounts for just 25% of the world auto sales compared to 40% in 2005, according to OICA, the manufacturers' association. Asia's share has leapt from just over 30% to nearly 60%.

All this is dismal news for a British auto industry that employs 900,000 people and generates $58 billion of annual exports. But in a world of uncertainty Japan's Big Three are right to reduce the risks they can see, so they are in a better position to deal with the ones around the bend.