Copies of "The Room Where It Happened: A White House Memoir:" Bolton highlights why Trump's mercantilist ways are warping U.S.-Asia relations.   © Reuters
CopyCopied

John Bolton's book on U.S. President Donald Trump's unhinged White House is pitched as a political memoir. Yet Asian leaders could be excused for filing it in the horror section.

Prime Minister Shinzo Abe, for example, now has 8 billion new reasons to regret ever hitching Japan's fortunes to Trump's presidency. That, claims Bolton, the former U.S. national security adviser, is the price in dollar terms that Trump wants to extort from Tokyo each year for hosting American troops.

Bolton's The Room Where It Happened: A White House Memoir makes clear that despite Abe's extreme efforts to befriend him, Trump treats Japan no better than South Korea or the Philippines. For Trump, friendly nations are an ATM he can extract payments from. This leaves Abe with some serious buyer's remorse -- and lots of explaining to do.

Japan is hardly alone. Bolton's book clarifies Asia's place in the Trump worldview: an economic machine to be stripped for parts by a mercantilist and transactional U.S. -- and one which is a direct target for Trump between now and November 3 when Americans cast ballots in the next presidential election.

The book's blockbuster allegation is Trump repeating with China the behavior toward Ukraine which already caused him to be impeached. It is easy to believe Trump practically begged China's President Xi Jinping, as Bolton argues, to help him secure reelection by buying huge qualities of agricultural goods.

Trump also gave up on human rights for the same reason, to placate Xi. He reportedly gave Xi a pass on what human-rights groups describe as concentration camps in Xinjiang for the Muslim Uighur minority. Trump, Bolton claims, told Xi it is "exactly the right thing to do."

He sold out Hong Kong, striking at the heart of the global economy. His administration has largely looked the other way as Xi's government systematically dismantles virtually every attribute that makes "Asia's world city" an investment mecca. "I don't want to get involved," Bolton quotes Trump as saying.

The huge price Asia might pay for losing its premier financial center is inversely related to how little Trump got from the transaction. The phase one deal Trump negotiated with Xi was more about saving face than altering trade dynamics. Even Trump's economic advisers cannot agree on whether this weak pact will survive.

Similar, Trump aided Xi in whitewashing China's Tiananmen Square crackdown for his own ends. When Trump was asked in June 2019 to make a public statement on the 30th anniversary of the brutal crackdown, Bolton claims he said: "Who cares about it? I'm trying to make a deal." It is easy to understand why Xi's Chinese Communist Party is rooting for another Trump term, as recent reports attest.

Taiwanese officials have reason to flip through Bolton's 577-page tome with dread. Trump, Bolton claims, was "particularly dyspeptic" about one of Asia's most vibrant democracies and economies because he was listening to those who had made money from mainland China, which claims sovereignty over the island.

Bolton highlights many other reasons why Trump's mercantilist ways are warping U.S.-Asia relations. Trump's summits with North Korea's Kim Jong Un since 2018, for example, were nothing more than publicity stunts. Since then, Kim's nuclear arsenal has increased markedly. Trump's moves to punish Chinese telecommunications juggernaut ZTE were less about national security than leverage. Abe also cannot be happy to learn Trump dispatched him to negotiate with Iran as a joke. 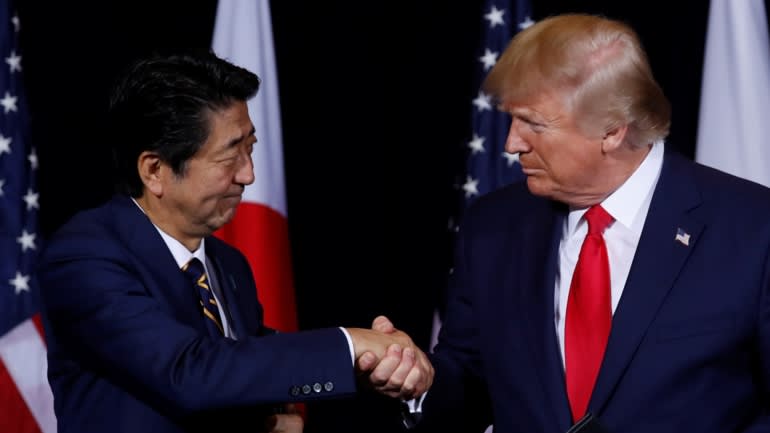 Abe cannot be happy to learn Trump dispatched him to negotiate with Iran as a joke.   © Reuters

Asia has a choice as Trump's poll numbers plunge: hit the pause button to see if Democratic rival Joe Biden wins 131 days from now or strike deals sooner, heeding Bolton's warnings about an even more belligerent second-term Trump. Even before the election, though, Asia faces any number of Trumpian wild cards.

Will South Korea's President Moon Jae-in be made to suffer between now and November for resisting Trump's demands to pay billions more for hosting U.S. troops? Might Trump use Taipei as a bargaining chip in his desperation for a broader China trade deal? Could Trump's next assault on Asia target Abe's economy for, in Trump's mind, insufficient submissiveness?

Reading between the lines of Bolton's book, Asia should not be surprised if Trump suddenly makes good on threats of 25% import taxes on cars and auto parts, blacklisting more mainland companies, weakening the dollar or clamping down further on work visas. In recent days, Trump has begun threatening "a complete decoupling from China," so Asia should brace for fresh tariffs on Chinese goods at any moment.

As Bolton argues, Trump is a "stunningly uninformed" leader solely focused on reelection. This puts China, and Asia more broadly, in harm's way as Trump seeks to cheer his base and bump a disastrous COVID-19 response from the headlines.

None of these risks can be ruled out as a caged and fearful U.S. leader thrashes about for ways to stay in office. As Bolton's account suggests, there really is no bottom where this White House is concerned. Horror, indeed.