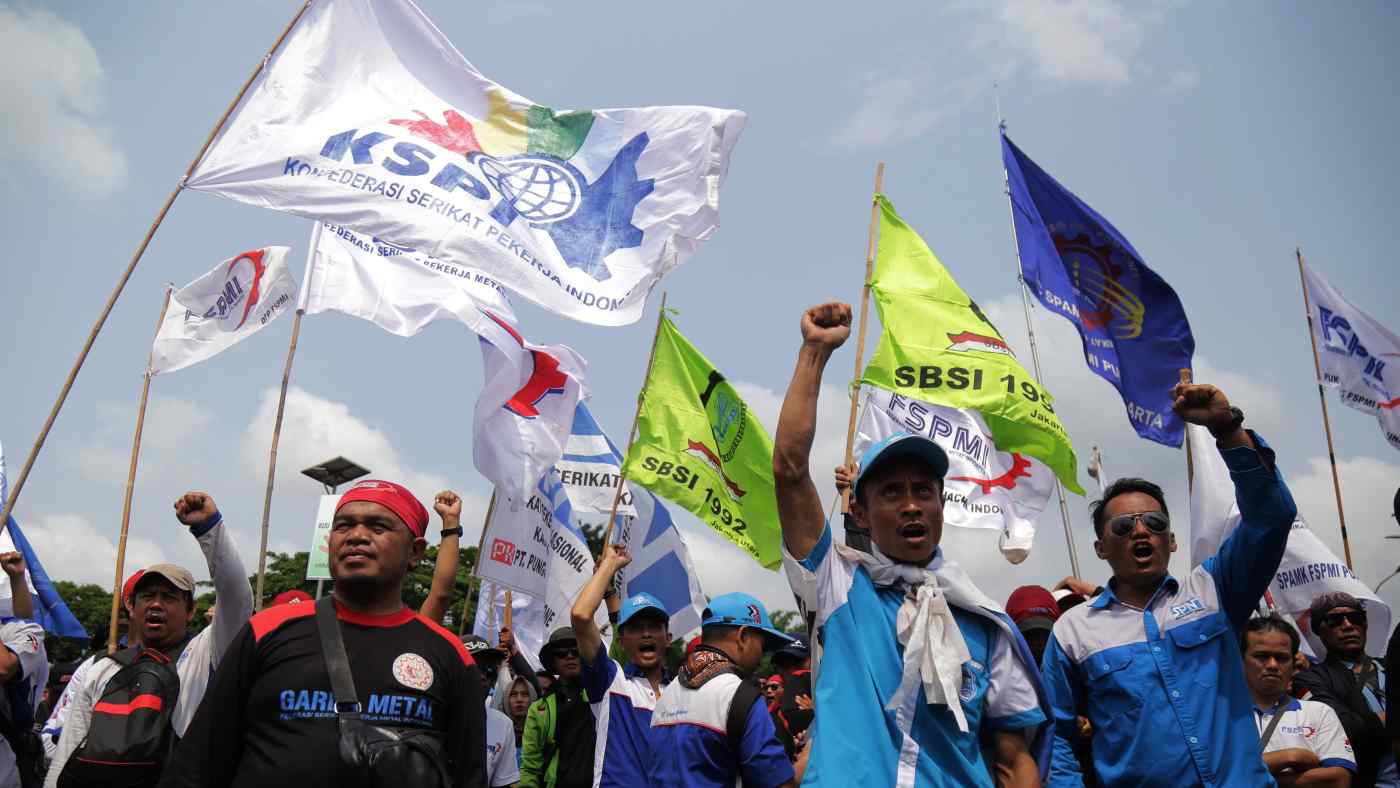 Hundreds of labors hold protest against the employment omnibus law in Jakarta on Jan. 20: there is resistance from labor unions, particularly to the sections on creating jobs and labor reform.   © Anadolu Agency/Getty Images
CopyCopied

Indonesia, which sits below Singapore, Malaysia and Thailand in global competitiveness rankings, is a classic example of how legal uncertainty, legislative sprawl and labor issues can put off global investors.

This tangle is why 33 companies avoided Indonesia when relocating their manufacturing plants from China to ASEAN, Jokowi complained. It revealed, he said, "a problem that we must resolve."

Now he thinks he has come up with a solution: an omnibus law. But it is not clear this will be enough to make Indonesia truly competitive and attractive to global business, and it faces stiff resistance from labor.

An omnibus law revises many laws and regulations at once, cutting across complexity in one swoop. With this, Jokowi plans to amend 74 regulations, 82 laws and 1,194 articles that make foreign investors reluctant to invest in Indonesia.

There are four main areas covered by this omnibus law, including job creation, taxation, labor reform and regulations relating to the new capital city Jokowi is planning. Creating jobs and labor reform are his top priorities. 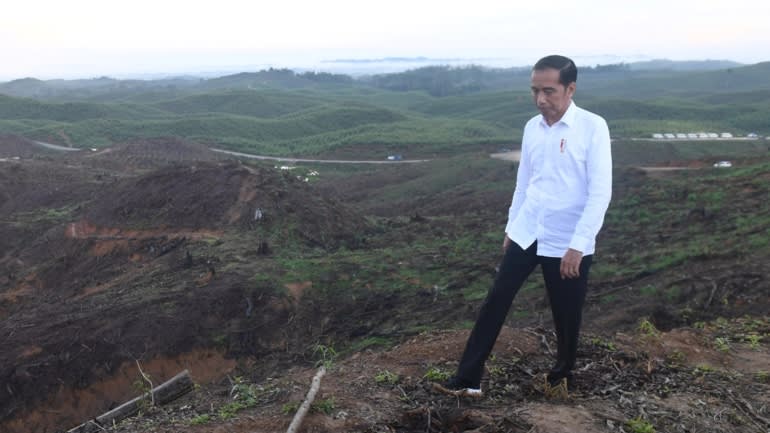 Joko Widodo walks as he inspects an area planned to be Indonesia's new capital on Dec. 17: the president is well aware of the problem.   © Reuters

Jokowi has already introduced "one-stop investment," also known as integrated licensing, which combines services from 21 ministries and institutions to lure foreign funds to Indonesia, but in reality anyone wanting to obtain business licenses often faces many obstacles, particularly between central government, provinces and the sub-provinces known as regencies.

Many investors have complained of unclear and complicated business procedures in Indonesia and these can open opportunities for bribery to expedite the process of obtaining licenses. Such practice is rampant in provinces and regencies outside of Jakarta.

The Corruption Eradication Commission is not powerful enough to combat this. For example, local governments oversold business permits for palm plantation in Kalimantan, which led to the destruction of 858,000 hectares of forest in 2019.

Overlapping regulations, complicated bureaucracy and illicit practices all combine to drive down Indonesia's place in the World Economic Forum's global competitiveness index. Even though Indonesia ranks above Vietnam, foreign direct investment still prefers Vietnam: FDI was three times as high in Vietnam as in Indonesia as a share of gross domestic product in 2018.

While Jokowi claims one of the few solutions to luring foreign investment is to harmonize all overlapping regulations with his omnibus bill, there is resistance from labor unions, particularly to the sections on creating jobs and labor reform.

They are afraid their interests will be diminished to accommodate employers, including by abolishing some financial support such as health and insurance benefits; changing the wage system from monthly payments to an hourly basis; and outsourcing jobs. The Confederation of Indonesian Trade Unions claimed the government did not involve labor in drafting the bill, only big business.

Governments have previously granted increases in minimum wages, responding to union pressure, to gain workers' support, but this triggers resistance from market players because they think the labor cost in Indonesia is high enough to be similar to China's.

Many companies in labor-intensive industries such as garment manufacturing have relocated their factories to Vietnam and Bangladesh because their labor cost is far more competitive than Indonesia's. As a comparison, the monthly minimum wage in Jakarta is $288, versus $86 in Vietnam and $18 in Bangladesh.

Jokowi's administration does not have many options left for reforming labor costs in Indonesia to help it raise GDP growth above a persistent 5%. Resistance and controversy will always occur if the government does not provide transparency of information or involve all stakeholders.

An omnibus law is a radical way to resolve overlapping regulations, but it is crucially important to reform the bureaucratic mindset and institutions at the same time.

Dr. Asmiati Malik is an Assistant Professor at the Universitas Bakrie Indonesia, with a focus on political economy of Indonesia.