LGBTQ controversy reminds us why ruling party is failing Though Taro Aso, seen here Jan. 18, did not make the recent offensive remark, Japan's deputy prime minister and finance minister can be blamed as much as anyone for the country's baby drought.   © Reuters
CopyCopied

Politics 101: Avoid the spectacularly dumb and offensive. Apparently, the toxic spectacle of the five-ring Olympic circus crashing Tokyo's pandemic is not enough for Yana. Why not further embarrass Japan globally?

We will let the ruling Liberal Democratic Party, which spawned this infantile 42-year-old, deal with his retrograde mindset. But it is hard not to see the bigger story at play as the LDP grapples, at long last, with a demographic that risks far bigger headlines.

Yana, according to press reports, complained that same-sex relationships "resist the preservation of the species." It is, obviously, an "extremely stereotypical view," retorted Taiga Ishikawa, one of Japan's very few openly gay parliamentarians.

What is not a stereotype, though, is how Prime Minister Yoshihide Suga's party prefers serving up red herrings to a shrinking population rather than addressing a growing problem.

Japanese who identify as LGBTQ are not responsible for a declining birthrate. The blame for that rests firmly at the feet of a party that over the past few decades did, essentially, nothing about it. 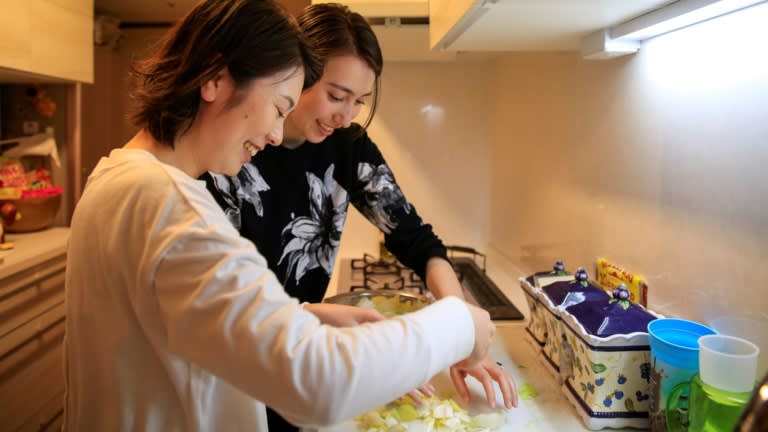 A lesbian couple cooks together in Tokyo on March 19: Japanese who identify as LGBTQ are not responsible for a declining birthrate.   © Reuters

Ask economists why young Japanese are not having more kids and they will cite a combination of economic insecurity, the excessively high costs of child-rearing, an inflexible corporate culture and the chronic failure to address a more-debt-than-people disaster unfolding in plain sight. COVID-19 pressures have exacerbated all of these preexisting conditions.

By "government," we mean an LDP that has ruled Japan with only two brief interruptions since 1955. In his nearly eight years as prime minister, from 2012 to 2020, Shinzo Abe punted the shrinking population problem forward. Suga, in office since September, barely mentions it.

Inside a socioeconomic vacuum, having fewer kids could be seen as doing humankind a solid. Environmentalists are happy. But when the most over-indebted developed economy fails to come close to meeting the replacement rate threshold, things get very complicated. And dangerous, once credit rating agencies get out their red pens.

Demographers generally agree that growing, productive economies should maintain a birthrate of around two children per family. Japan's rate is roughly 1.3.

Last month, members of the Council on Economic and Fiscal Policy, Japan's top advisory panel, said a "sense of crisis" is needed. Asia's second-biggest economy may record fewer than 800,000 births this year, a decade ahead of predictions once dismissed as too gloomy.

The population has been shrinking for a decade now. The ranks of the over-65 cohort now stand at about 30%. Pledges to woo waves of foreign talent have gone no better than curbing public debt. COVID-related stimulus only accelerated Tokyo's trajectory past a 250% debt-to-gross-domestic-product ratio.

So, really, what is the plan here? Sure, Suga's inner circle seems plenty busy creating vaccination protocols. It seems preoccupied saving a Tokyo Olympics taking hits by the day, including the U.S. warning Americans not to visit pandemic-hit Japan.

But avoiding embarrassing and costly credit downgrades would seem more important than a few weeks of sporting events. At the moment, Tokyo's sovereign grade is generally on a par with China, which 10 years ago surpassed Japan in GDP terms. Imagine how this proud nation of 126 million will feel when Moody's, S&P Global and Fitch Ratings all rate developing China a more trustworthy credit risk.

This inevitability is not because of LGBTQ folks living their lives, no matter what folly pours from lawmakers' mouths. Nor are women opting not to have more kids the "problem," as Finance Minister Taro Aso infamously griped in 2019.

Aso's knack for failing upward speaks to the broader problem. His party, too. In 2007, the LDP's then-Health Minister Hakuo Yanagisawa called women mere "baby-making machines." It made headlines globally, and feminists called for a gender-equality reckoning.

As if. In 2007, Tokyo ranked 91st in the World Economic Forum's annual gender-equality report. Today: 120th. In 2007, Japan was one rung above Malaysia. Now it trails Malaysia by eight places. That, despite Abe's supposed campaign to make women "shine."

Look, as an American I feel ill-suited to judge. The LGBTQ community fared dismally during Donald Trump's 2017-2020 presidency. Nor did women advance on the watch of a man credibly accused of sexual misconduct by more than two dozen women. The only thing Trump made great again was sales of George Orwell's 1984 and Margaret Atwood's The Handmaid's Tale.

But has Japan's old-boys club considered that empowering women might help Japan's birthrate/debt mismatch? If companies did more to offer flexible schedules, if local governments did more to provide affordable child care and education, and national politicians yanked their mindset out of the 1950s, Japan could put its economy on a winning trajectory.

Yana, thankfully, does not speak for his party. Yet his anachronistic worldview is not the outlier in LDP circles one would hope. And that tells us more about why, at a moment when the rest of the globe is panicking over inflation, Japan fears it is veering back to the past. And not just deflation.