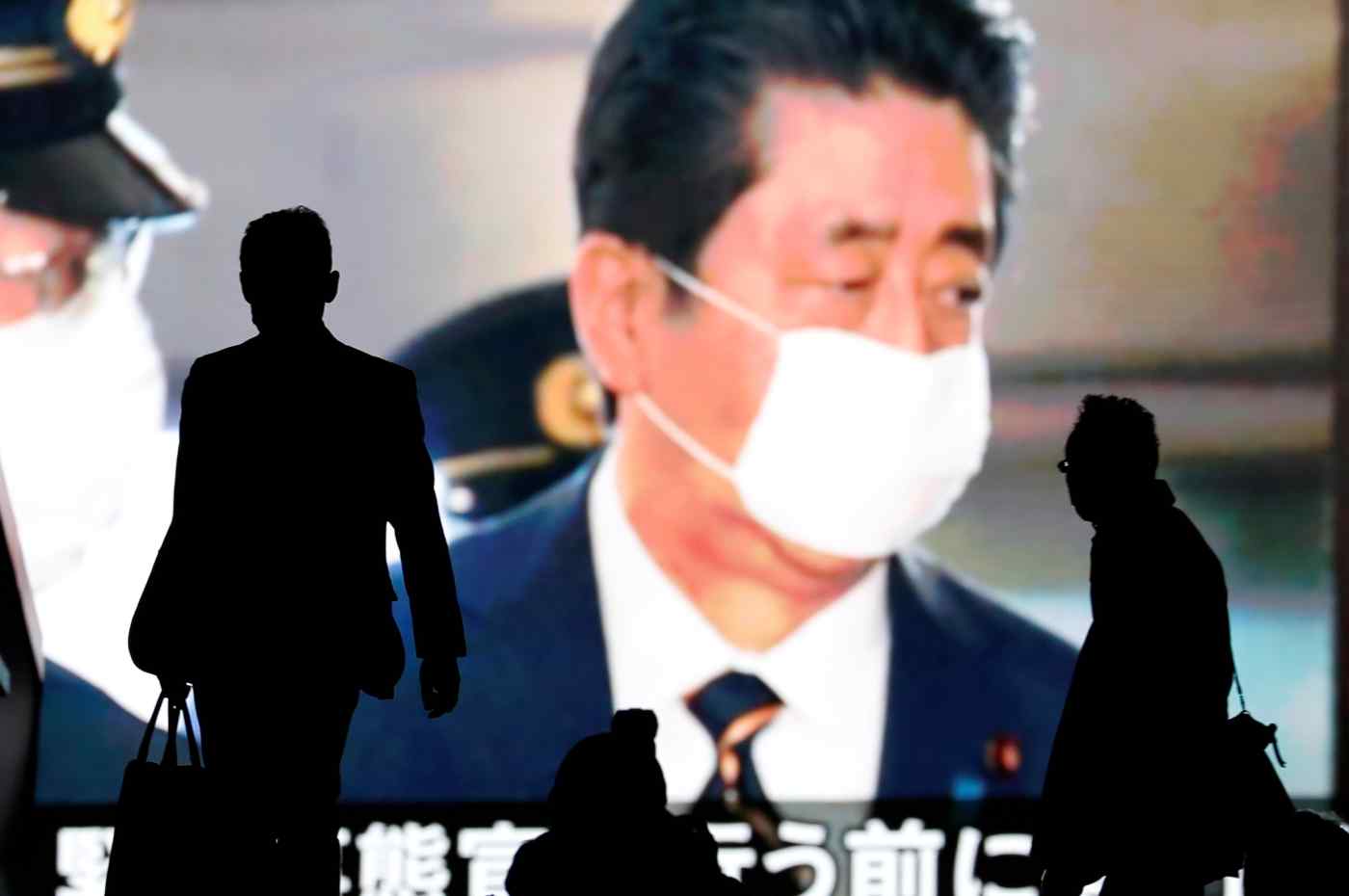 A giant screen reporting Shinzo Abe and Japan's response to COVID-19 outbreak in Tokyo on Apr. 7: the question is whether his government can survive even this term.   © Reuters
CopyCopied

It is difficult to think of an Asian leader having a worse 2020 than Japan's Shinzo Abe.

Last November, the prime minister was riding high as he became the nation's longest-serving. This year he wanted to secure a career-crowning revision of Japan's pacifist constitution and have a moment to shine in the global spotlight as Tokyo hosted the Olympics. Instead, 2020 has brought recession, the stench of scandal, a pandemic that delayed the Games and a lame-duck status for Abe few saw coming.

At the start of the year, the talk was of party-rule changes to enable a fourth Abe term, but the question now, as voters ponder the unfulfilled promises of economic reform that brought Abe to power in 2012, is whether his government can survive even this term.

Recent economic news has been bad. Retail sales dropped 12.3% from a year ago in May, following a 13.9% April fall that was the worst since 1998. Sentiment among large manufacturers in June fell the most since 2009. These and other data suggest Japan's downturn may be deeper than the government admits.

Even more disturbing for Abe, from a political standpoint, nearly 70% of Japanese voters, according to a recent Asahi newspaper poll, have no interest in a fourth term with Abe as president of his Liberal Democratic Party and thus potentially as prime minister.

There are many explanations for Abe's popularity deficit. Though Japan's coronavirus caseload is comparatively low, many see his response as opaque and tentative. The recent arrest of his former justice minister on suspicion of vote-buying reminded Japan of myriad other LDP scandals. And Abe's bromance with U.S. President Donald Trump is running afoul of many voters.

On the surface, Team Abe appears active in propping up the economy, which shrank 2.2% in the first quarter on an annualised basis: it announced more than $2 trillion of government stimulus to combat fallout from the coronavirus. This could put a floor under growth and mitigate a forecast 22% fall in gross domestic product for the second quarter. Takashimaya department store reopens its doors to customers in Tokyo's Nihombashi district on May 18: Japan's downturn may be deeper than the government admits.   © Reuters

Below this, though, there is little going on to cut bureaucracy, internationalize labor markets, support a startup boom or empower women -- all reforms Abe promised in 2012. Stimulus without reforms will only take Japan so far.

Asia's second-biggest economy needs a deregulatory Big Bang of the kind Abe advertised back then more now than ever. But as his political fortunes wane, so do the chances his government will prioritize policies for rediscovering this innovative energy.

More likely, Abe's inner circle will engage in a mad dash to tweak the wartime constitution to allow Japan to field a conventional military. So far, Abe's LDP has relied on semantics -- a reinterpretation -- to deploy troops overseas. Expect a furious push to codify such language to cheer Abe's fellow nationalists.

Lost in the shuffle, though, will be the best shot in decades to build genuine economic muscle. Recent stimulus is just more steroids pumped into Japan Inc.'s atrophying veins. Tokyo must shift incentives toward twentysomething innovators keen on creating economic energy and away from industries losing ground to China, South Korea and upstarts in Southeast Asia.

Stimulus has been Tokyo's go-to play for 20-plus years. As the deflationary pressures Japan thought it had defeated return, more of the same is a recipe for mediocrity.

Abe's best chance for political survival is resurrecting his reform revolution. He can start by shaking up a change-averse economic team. As finance minister, Taro Aso has produced more verbal gaffes than changes to the economic playbook of old. Nor does Economy Minister Hiroshi Kajiyama seem a particularly creative steward as Japan navigates a chaotic global situation.

Next, announce a series of expedited upgrades for everything from making it easier to start businesses and creating a more competitive corporate tax system to loosening labor laws and simplifying visa offerings. If COVID-19 and shelter-in-place imperatives taught Japan Inc. anything, it is that flexibility is more of an economic virtue than a threat.

To regain the reformist narrative, Abe will have to summon an ability to shake up Tokyo's bureaucracy and multitask which he has not these last seven-plus years. But if he was slow to implement big structural changes when growth and support were more buoyant, the odds he will now take on vested interests are dwindling by the day.

If he does not, however, Japan's trajectory into 2021 could be just as lame as Abe's economic legacy.