The Federal Open Market Committee -- the interest rate-setting body of the U.S. Federal Reserve -- announced a long-awaited review of monetary policy strategy late in the summer which is called flexible average inflation targeting.

This is hugely important. The FOMC made two important decisions in interpreting the Fed's dual mandates. Namely, maximum employment and price stability.

Regarding the former, the FOMC stated that the Fed's policy decisions will be informed by its "assessment of the shortfalls of employment from its maximum level." This expression is not easy even for economists to understand. Simply put, it means "the lower unemployment rate is, the better it is." Previously, the Fed was concerned about too low an unemployment rate because the tight labor market was seen as implying higher future inflation. But the Fed has now abandoned the idea of a "natural rate of unemployment."

When it comes to price stability, the FOMC stated that "following periods when the inflation rate has been running persistently below 2%, appropriate monetary policy will likely aim to achieve inflation moderately above 2% for some time."

I wonder whether this strategy really is the answer to the problems they see. Many central banks, including the Fed, have repeatedly strengthened forward guidance on the future course of monetary policy in the hope of achieving this target but failed.

Nevertheless, what can we expect from the announcement of new forward guidance -- of allowing the inflation rate to overshoot 2% to enable this target level? The new strategy could work but only after inflation exceeds 2% for some reason. It is just like waiting for a tailwind to blow on the inflation front.

The Fed's new strategy has profound global implications because of the dominant status of the dollar, which virtually sets the rules of monetary policy that other central banks follow. In this respect, the message and its implications of the new strategy are very clear. Low interest rates will persist globally for quite some time, and that is affecting currency markets.

Consider the dilemma faced by the European Central Bank, where the trade-weighted index of the euro exchange rate is now at a historic high. Their situation is the same as what the Bank of Japan experienced at the time of the collapse of Lehman Brothers in 2008. Back then, Japan's yield curve was much lower than that in other developed economies. The BOJ was not equipped with the instruments to counter currency appreciation pressure in the face of aggressive monetary easing abroad. 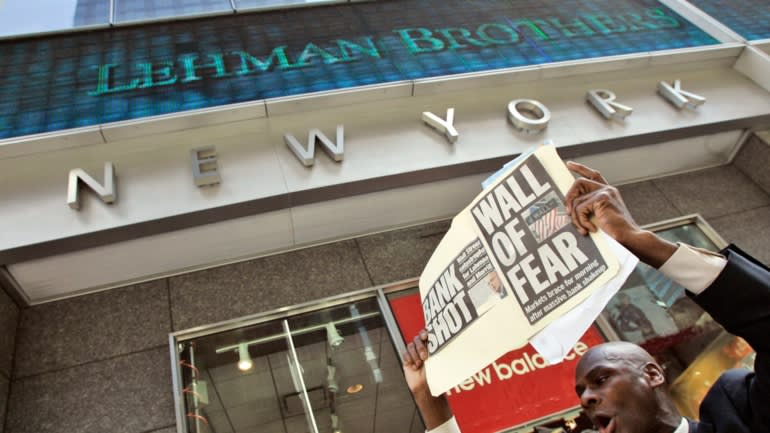 The Lehman Brothers headquarters in New York, pictured on Sept. 15, 2008: the BOJ was not equipped with the instruments to counter currency appreciation pressure.   © AP

Since the exchange rate expresses the relative price of money, there will always be some economy that will find itself in this position. Already, we are seeing moves for further monetary easing. The ECB, which is now reviewing its monetary policy strategy, seems to be hinting at further monetary easing. The Reserve Bank of Australia, being explicitly concerned about exchange rate appreciation, lowered its cash rate to 0.1% on Nov. 3, and said that "the Board is not expecting to increase the cash rate for at least three years."

The effectiveness of monetary easing essentially derives from front-loading future demand to the present, or shifting demand back home, away from foreign countries. As global monetary easing is prolonged, it inevitably becomes a zero-sum game as the room for front-loading future demand diminishes. Further, since investment is undertaken according to the order of profitability, productive investment will decline over time.

The credit spread will be suppressed by aggressive monetary easing, which could lead to lower productivity growth resulting from hampering the allocative efficiency of credit markets. Lower potential growth coupled with bloated debt due to front-loading will increase the likelihood of a financial crisis.

At Jackson Hole in 2018, Fed Chairman Jerome Powell made a very thoughtful speech ahead of the beginning of the policy review. The most interesting passage in his speech was: "Whatever the cause, in the run-up to the past two recessions, destabilizing excesses appeared mainly in financial markets rather than in inflation. Thus, risk management suggests looking beyond inflation for signs of excesses."

This consideration is partially reflected in the Fed's new strategy which explicitly states that "sustainably achieving maximum employment and price stability depends on a stable financial system." It also referred to "risks to the financial system that could impede the attainment of the Committee's goals" in their assessments of the balance of risks.

This is certainly an improvement over the previous strategy, but the review should have been much deeper. Now is the time to follow through with Powell's argument and seriously reconsider the current monetary policy strategy and its intellectual underpinnings.