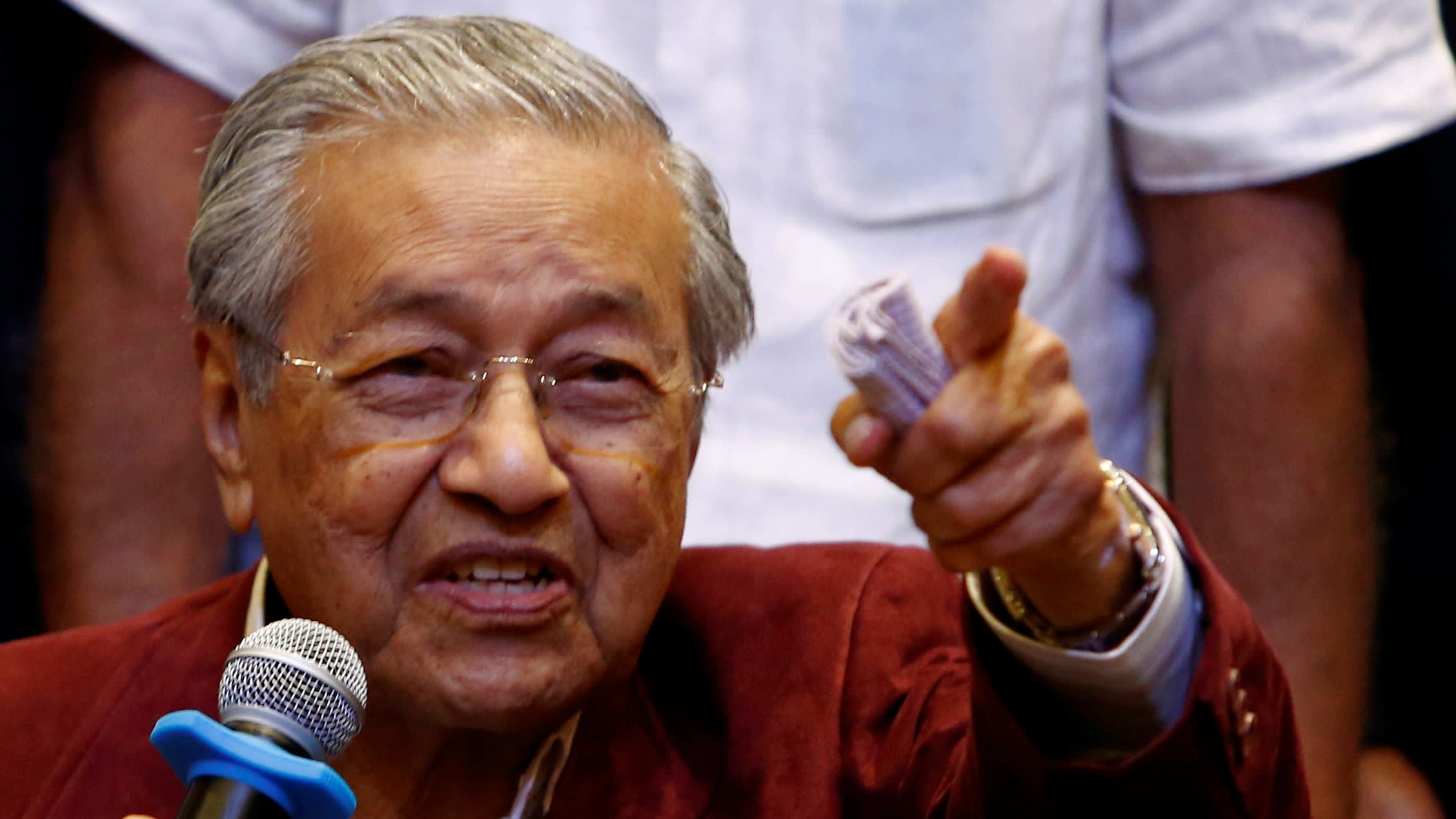 It is not the time for Malaysia's well-wishers to sit out but to tap the new premier's reform moves.   © Reuters
CopyCopied

The Malaysian public is going wild about the return of Mahathir Mohamad to the prime ministership, some even going to the extent of emulating him in putting Berocca vitamins on their breakfast table or wearing Bata sandals to the mosque.

But it is probably fair to say not many of Malaysia's traditional allies in the region and beyond have joined the "Tun-phoria" (the word derived from the honorific before his name, conferred by Malaysia's king) after the May 9 elections brought him back at the age of 92.

Though impressed at the way Malaysian voters resisted the bribery and electoral fiddles of his scandal-hit predecessor, Najib Razak, to oust the Malay-dominated coalition that had ruled more than 60 years, foreign officials recall a prickly counterpart during Mahathir's previous 22 years in office, ending in 2003.

Mahathir sparred with neighboring Singapore, over sales of water to the island-republic, ownership of an old rail terminus, and bits of territory. He clashed with Australia, being called "recalcitrant" by its former prime minister, Paul Keating, for preferring a regional economic group over one including Americans and Antipodeans. Cool about traditional allies in the U.S. and the U.K., he wanted Malaysia to "look East" and embrace "Asian values."

Najib by contrast was a friend of Washington, taking Malaysia into the Trans-Pacific Partnership trade and investment pact that formed a key part of Barack Obama's "pivot" to Asia, and later making an early visit to meet President Donald Trump. He showed readiness to help Australia divert would-be asylum-seekers.

Already , Mahathir has trodden on Singapore's toes. He dropped the $17 billion Kuala-Lumpur-Singapore high-speed rail project, and suggested that its ruling People's Action Party, in power for 59 years, was also running out of time. "I think the people of Singapore, like the people in Malaysia, must be tired of having the same government, the same party since independence," he said.

At a recent Nikkei forum in Tokyo, the old economic protectionist showed through. He suggested a new "national car" project to replace his beloved Proton Saga enterprise, a white elephant sold to Chinese control by his successors, and said aspects of the TPP should be renegotiated so developing nations can nurture young industries.

In interviews he has admitted to being too heavy-handed with opponents, but refuses to concede that his previous erosion of checks and balances -- by replacing independent-minded judges, curtailing royal powers, and getting police to misuse anti-sedition laws -- led to the Najib-era scandals.

But it would be wrong to assume Mahathir is out to resurrect old dreams and grudges. It would be wrong for Malaysia's friends in the U.S., Europe and the Asia-Pacific to hang back from engagement and wait for the perceived old curmudgeon to hand over to the younger and more liberal Anwar Ibrahim, 70, as he is promised to do in about two years.

For one thing, while the old man might not have changed, the political context has. Instead of heading the United Malays National Organisation -- long regarded as sole protector of indigenous Malays and their religion, Islam -- Mahathir is consensus leader of a multi-racial, multi-party coalition, with only a tenth of its members of parliament belonging to his own party.

He is also surrounded by cabinet colleagues determined to hold him to institutional reform. Two he previously put behind bars for their opposition, Finance Minister Lim Guan Eng and Defense Minister Mohamad Sabu. Anwar himself was jailed after challenging Mahathir's leadership in 1998 on dubious sodomy and corruption charges in 1998, a tactic followed again by Najib in 2015.

And at 92, Mahathir has made clear to visitors he has no time left for more grand industrial projects. His government will be scrambling for money anyway, having cut the unpopular goods and services tax from 6% to zero, losing $10.46 billion in revenue, and promised to subsidize gasoline prices.

His focus is on cleaning up after Najib, who -- he has alleged -- documents show was clearly responsible for decisions that saw an estimated $4.5 billion disappear from the state investment fund 1MDB (Najib denies wrongdoing).

Mahathir has been quick off the starting blocks. The Malaysian Anti-Corruption Commission has questioned Najib and police have raided his properties. The attorney general, the central bank governor, and the head of the Special Branch (the key internal security agency) have been replaced. Some 17,000 consultants, many UMNO cronies, have had their contracts terminated.

But Malaysians are starting to realize the enormity of the reformasi (reform) task. Promotions in the bureaucracy were won by loyalty to UMNO and compliance to the prime minister's interests. Lower down, the civil service is riddled with poor standards, partly as a result of decades of recruiting preference for Malays and other indigenous groups.

Talking to foreign ambassadors, Mahathir has indicated his willingness to accept expert help from foreign counterparts to Malaysian institutions, including the police, the judiciary, and the electoral commission.

Mahathir and colleagues want to tackle the poor outcome from a switch in public schools to Malay language from English in the early 1970s. This tried to address the economic backwardness of Malays, compared to ethnic Chinese and Indians, that had erupted in racial riots in 1969. Then a young Turk in UMNO, Mahathir wrote a book, The Malay Dilemma, that became script for decades of positive discrimination toward Malays.

Instead it isolated Malays even more. With public schools employing a language with little currency in the wider world, and taking on an increasingly Islamic tone, parents of other races took their children out of public schools to private schools that taught in English or community languages, and sent them abroad for higher study. Young Malays now speak worse English than their grandparents.

Mahathir's pathway to winding this back, tacitly, is to reintroduce English as the teaching medium for math and science, and gradually attract back more students from other races.

Now, therefore, is not the time for well-wishers of Malaysia including Australia, Japan, India, Britain, the U.S. and close regional neighbors to wait him out. Nor should critics crow about policy reversals or expect Mahathir to recant, or try to revive the Western vs Asian values debate (muddied by Trump and other Western populists anyway).

They should bear in mind that although Mahathir has distanced himself from Najib's ultra-friendly approach to China, Beijing is still deeply interested in Malaysia and will exploit any openings created by the inaction of other partners of Kuala Lumpur.

The Mahathir transition is an important opportunity for reform. With his immense popularity plus his record as the leading proponent of pro-Malay policy, Mahathir is uniquely placed to take his fellow Malays back to this failed earlier model -- especially if UMNO tries to revive its fortunes by stoking the "3 Rs" of race, religion and royalty among Malays.

By assisting these reforms where they can, foreign partners can help guide Malaysia on a more positive, forward-looking, path.

So far Malaysia has often been seen as a country that is "less than the sum of its parts," in the words of one former ambassador to Kuala Lumpur. Now, the grandfather of Malaysian politics has the popular trust to launch vital reforms so that the whole can finally be greater than the country's many pieces. Malaysia's friends must help him.

Hamish McDonald is an author and a former regional editor of the Far Eastern Economic Review during Mahathir's previous government.