Mahathir's window for reforms is closing faster than he thinks Mahathir is caught in a Catch-22.   © Reuters
CopyCopied

What does Malaysia's Mahathir Mohamad know that other Asian leaders do not?

It is a live question: the prime minister's government is refraining from stimulus even as most peers cut interest rates in the face of the U.S.-China trade war. Singapore just loosened its monetary policy for the first time in three and a half years.

What is more, Malaysia is even forecasting slightly faster growth in its 2020 budget, published earlier in October: Mahathir's government predicts 4.8% growth next year from a targeted 4.7% this year. That comes as Singapore, South Korea and Japan skirt recessions. Over the last 12 months, this has turned Malaysia into a self-proclaimed safe haven.

Only time will tell if Mahathir is right or dabbling in hubris. The details of the budget, though, raise another concern: a lack of bold steps to restructure an uncompetitive economy.

This budget is not devoid of new ideas. One is tax exemptions to promote high-value-added advances in electronics, a bid to entice companies looking to diversify operations from China. Another is $5.2 billion to develop high-speed internet nationwide, including a fifth-generation, or 5G, ecosystem.

Unfortunately, plans for 2020 all but ignore the biggest challenge: affirmative action policies that stymie innovation and productivity and turn off foreign investors.

Since the early 1970s, the ethnic Malay majority has enjoyed preferential access to education, jobs, government contracts, housing and investment. It means three-fifths of Malaysians have significant advantages over less-affluent ethnic Chinese and Indian citizens.

It is a recipe for mediocrity and holds back the broader economy, undermining competitiveness. These antiquated policies also mean the household income of Bumiputras -- ethnic Malays -- has grown faster than minority communities, deepening social divides. That reduces Malaysia's appeal with multinationals.

Mahathir has demurred on the problem, yet a key reason investors gave him the benefit of the doubt was his pledge to make the economy work for all Malaysians, not just the ethnic Malay majority and the wealthy. It is a recipe for structural income inequality.

Mahathir is indeed excelling in some ways, notably in restoring trust in government after predecessor Najib Razak's nine years at the helm. Aside from deepening protections of ethnic Malays, Najib found himself at the center of a massive global corruption enquiry.

He was arrested in September 2018 in connection with billions of dollars of funds that went missing from 1MDB, a state fund he created in 2009; he denies all charges. The controversy spawned investigations from Washington to Zurich and even had a supporting role from actor Leonardo DiCaprio, who starred in a movie allegedly financed with money siphoned off 1MDB.

In May 2018, voters turned to Mahathir, the father of modern Malaysia as prime minister from 1981 to 2003, and he has taken hard steps to bolster trust in his government.

One he made early on -- admitting that Malaysia's debt exceeded what the previous government said -- afforded some reformist street cred. Ditto for speaking bluntly about China's protectionism and India having, in his words, "invaded and occupied" Kashmir.

His tenure also turned capital Kuala Lumpur from a tropical backwater into one of Southeast Asia's premier metropolises with a world-class skyline. The trouble is that Malaysia's political infrastructure has been slower to change, which makes Mahathir's 2020 vision so underwhelming.

Leaders have a brief window of opportunity to enact sweeping changes. While taking on powerful vested interests, it is best to act fast, while approval ratings are buoyant and the public is more amendable to disruption. Leaders from Japan's Shinzo Abe to India's Narendra Modi must harbor their own regrets for slow-walking big reforms.

In Mahathir's case, that window may close faster than he thought. The 94-year-old pledged to serve a couple of years and then hand the reins to Anwar Ibrahim, leader of the governing coalition and Mahathir's de facto deputy.

The two share a complicated history, including Mahathir's government arresting Anwar 21 years ago on charges ranging from corruption to sodomy. It is still unclear when Mahathir will step aside and if Anwar, a man with some serious baggage -- including jail time -- will indeed get the top job. 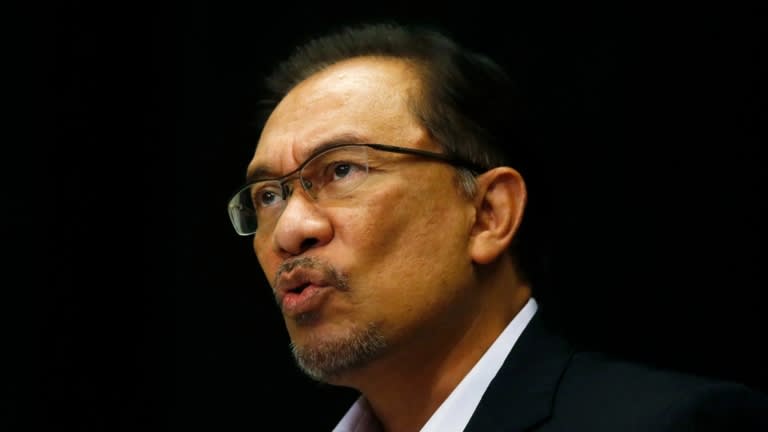 It is still unclear when Mahathir will step aside and if Anwar Ibrahim will get the top job.   © Reuters

That is all the more reason to harness today's stable growth to push through some meaningful changes.

They could include paring back ethnic Malay precedence for government contracts, jobs, university slots and housing. These warp incentives, damaging competitiveness and limiting investment from multinationals. Malaysia's score in the World Bank's Global Competitiveness Index is essentially unchanged since the year Najib took office --- 24th in 2009, 25th now.

Granted, the trade war is not making it easy. The headwinds complicate Finance Minister Lim Guan Eng's efforts to reduce Malaysia's fiscal deficit to 3% from around 3.4% now.

Yet Malaysia is caught in a Catch-22. It must change to keep up with Indonesia, the Philippines and Vietnam, but doing so threatens Mahathir's powerful voting blocks and benefactors. Mahathir risks overplaying his hand and returning Najib's party to power.

Even so, it is incumbent upon Mahathir, as a cagey elder statesmen, to take some hard steps.

Malaysia's vested interests need a jolt of Mahathir's truth-telling. Mahathir has enough gravitas from his career to forge a brighter future.

William Pesek is an award-winning Tokyo-based journalist and author of "Japanization: What the World Can Learn from Japan's Lost Decades.