Malaysia and Vietnam must unite against China, not fight each other Given Vietnam's long history of resistance to China, many saw its chairmanship of ASEAN this year as a unique opportunity to assert the rights of smaller nations in the South China Sea.

In many ways, the Southeast Asian country is seen as the last bastion of independence from an assertive China, which has rapidly transformed the disputed waters of the South China Sea through building large-scale islands with state-of-the-art weapons systems. In early April a Chinese vessel allegedly rammed and sank a Vietnamese fishing boat in the South China Sea.

However, Vietnam's efforts at rallying ASEAN are threatened by Malaysia's unilateral challenge to both Vietnamese and Chinese claims in the area. The COVID-19 pandemic has further undermined Hanoi's ability to rein in Beijing's worst instincts and peacefully manage the disputes. And to the consternation of the U.S. and its regional partners, there are signs that China is exploiting the crisis to push its claims and strategic interests at the expense of distracted neighbors and rivals. This week the U.S. officially rejected China's claims in the South China Sea.

While Malaysia's growing geopolitical assertiveness is a welcome departure from its decades of relative acquiescence to Beijing, this should not undermine efforts at forging a common front under ASEAN's banner.

During his latest spell in office, which ended only recently, Malaysian Prime Minister Mahathir Mohamad inspired developing nations against what he called China's "new version of colonialism" which ensnared countries in the debt trap of unsustainable infrastructure investments.

Then, last December, Malaysia surprised everyone by submitting a claim to extend its continental shelf in its northern waters to a U.N. commission.

To Beijing's chagrin, the submission directly challenged China's expansive "nine-dash line" claim, which cuts across the South China Sea. In response, Beijing lashed out at its neighbor for "seriously infring[ing] on China's sovereignty, sovereign rights and jurisdiction."

Malaysia's legal maneuver also directly challenged Vietnam's claims in the area. In fact, it even partly contradicted the spirit and letter of a 2009 joint Malaysian-Vietnamese submission to the U.N., where the neighbors signaled their commitment to peacefully managing overlapping claims.

Intent on preserving unity within ASEAN, Vietnam largely kept its cool, refusing to follow in China's footsteps by openly criticizing Malaysia's submission. In late December, however, Malaysia raised the stakes by pursuing unilateral energy exploration activities in areas claimed by both China and Vietnam, triggering a three-way naval showdown.

The episode has underscored two important factors. First, China is tightening its grip across the South China Sea, exhibiting limited tolerance for any energy exploration activity by its smaller neighbors, even though a tribunal ruling in 2016 nullified its expansive claims in the area. 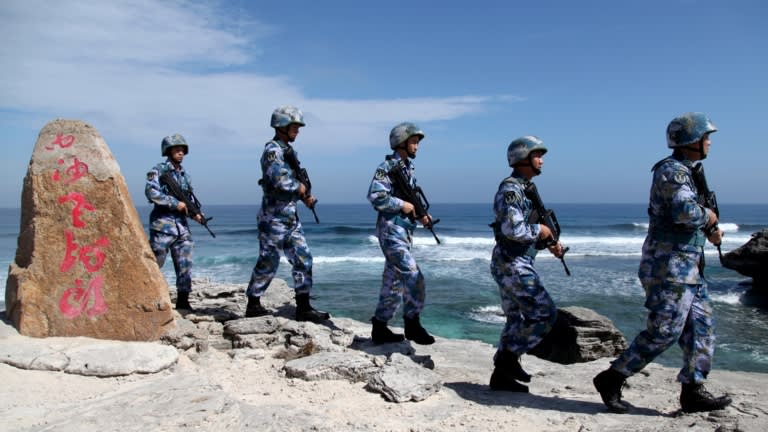 Soldiers of People's Liberation Army Navy patrol at Woody Island in the Paracel Archipelago in January 2016: China is tightening its grip across the South China Sea.   © Reuters

Second, Vietnam has shown considerable self-restraint, likely in an effort to maintain unity within ASEAN. So far, it has refrained from deploying warships, with its militia vessels simply monitoring Malaysian activities in the area. Officials in Hanoi have maintained diplomatic silence, instead focusing on rallying the region in the South China Sea disputes.

Malaysia-Vietnam cooperation is particularly urgent in light of high-stakes negotiations for a Code of Conduct in the South China Sea, expected to be finalized by next year. Though the pandemic has disrupted the negation process, Southeast Asian claimant states should push for a robust agreement which will reduce the threat of military conflict, constrain China's coercive actions in the disputed areas and discourage further unilateral action by competing claimant states.

A decade ago, strong cooperation between ASEAN countries such as Malaysia and Vietnam was instrumental to growing pressure on China. Bewildered and threatened by growing ASEAN assertiveness and cooperation with outside powers such as the U.S., Chinese Foreign Minister Yang Jiechi desperately warned, "China is a big country and other countries are small countries, and that's just a fact."

Malaysia and Vietnam should enhance maritime cooperation, including joint energy exploration projects in overlapping areas of claim, based on the 2009 joint submission and intra-ASEAN agreements and principles, which emphasize peaceful management of disputes in accordance with international law.

ASEAN countries should pursue maximum possible solidarity and cooperation in these difficult times by focusing their attention on dissuading further Chinese unilateral action. In April, a giant Chinese Coast Guard vessel "hindered, rammed and sunk" a Vietnamese boat in northern portions of the South China Sea, according to Vietnam. This is an opportunity for Malaysia to show solidarity, which the Philippines, another claimant state, did through a high-profile public statement.

Moreover, the ASEAN nations should not be lured by China's "face-mask diplomacy." It is in their interest to ensure that there are no geopolitical strings attached to Beijing's humanitarian assistance. While welcoming cooperation with Beijing on areas of shared interest, Southeast Asian nations should draw a line against further acts of aggression.

Given China's brazen opportunism, the last thing the region needs right now is escalating tensions, if not a naval confrontation, between two Southeast Asian nations.